Social media networks, particularly Facebook, have remarkably influenced the lives of people, including entrepreneurs, in the past two decades. Social media networks encompasses of various technologies, including social networking, blogging, video sharing, microblogging, collaborative authoring, social tagging, bookmarking, scheduling and meeting tools (Nicholas & Rowlands, 2011). Social media networks have become a powerful platform to connect people as it allows virtual discussions and broadcasts of any type of content on the Internet (Bauer et al., 2005). Thus, social media networks, especially, Facebook, has become an important part of millennials life in terms of communication and these networks incorporate digital technologies in every aspect of millennials life. They have not seen the world without interactive digital technology, and digital technologies, which drive world homogeneity among the present generation. According to generational cohort theory (GCT), generations can be grouped into historical cycles bases on particular events that meld the attitudes and behaviour of the members of each cohort. Millennial are a homogeneous cohort, they grew up with digital technologies (Sanchez, et al., 2006); and exhibited connectivity and analogous approaches in their behaviour (Moore, 2012).

RQ1 : What are the factors that influence the millennials to add “Like Clicks” of the Facebook
advertisements?

RQ2 : Do the “Like Clicks ” influence the millennials to buy the product ?

Previous studies have showed that social media advertisements strongly influence purchase decisions among Generation Y (Yadev et al., 2013); create brand awareness (Duffett, 2015) and develop positive attitude of purchase intention towards online advertising. Sharma (2013) reported that social media advertising may change the preferences of consumers’ choice; Yang (2012) conveyed that Facebook advertisements enhances attitude towards brand awareness among consumers and have considerable effect when their friends share these advertisements. Duffelt (2015) stated that social media networks has become a fundamental platform for every business and it has full potentials for communication with consumers and marketing. However, not all this studies determined the causes behind adding ‘Like Clicks’ on Facebook advertisements among millennials.

Enjoyable, exciting and funny characters are the components of hedonism. According to Affective theory consumer, preferences will be based on pleasure, feeling or emotions that arise from a particular message (Gardner, 1985). Creative advertisements on Facebook stimulates emotions. Previous studies have stated that hedonistic advertisements capture the aesthetic enjoyment or emotional release of consumers (Azeem, 2012), satisfaction and enjoyment (Bowie & Chang, 2005), feelings of strong excitement (Griffin, 2006), as well as induce fun, joy and excitement (Moore, 2012). Since hedonic advertisements stimulate emotions, that may influence to add ’Like Clicks ‘on the Facebook, advertisements. Therefore, hedonism is added as a construct in this study.

Advertising on the Facebook platform allows consumers to choose from a wide variety of products and compare the prices of the product from their home, whereby saving a significant amount of time and fuel cost for consumers. The good economic value of the product is an economic factor that accelerates the purchase intention of consumers (Wolin et al., 2002). However, Thamaraiselvan et al., (2005) found that the good for economic value of the product has an insignificant relationship with advertising value in India. Facebook advertisements always focus on the economic advantages they can offer to potential customers. Millennials are price picky generation; before they buy, they compare the prices in few websites of product. The number of ‘Like Clicks’ that the Facebook advertisements have influences consumers to choose products without searching, thereby saving a substantial amount of time.

Quantitative method was used to collect data through survey questions and the collected data was analysed by using Adanco software through Partial Least Squares (PLS). The questionnaires were set on a five-point Likert scale on the following constructs. Product Information (4 items), Hedonism (4 items), Good for Economic Value (3 items), Add ‘Like Clicks’ (4 items) and Purchase Intention (3 items). The study collected the data from millennials who were born in between from 1994 to 2004 because they are grew up in the digital world and social media networks are vital for them. The survey questionnaires were sent to 800 students from various universities through social networks and only 250 questionnaires were returned without missing data.

Table 1 shows that all respondents are millennials and among the respondents 44.8 percent of them are females and 55.2 percent are males. This finding proves that data were distributed evenly across gender.

Previous researches have confirmed that PLS–SEM is heavily used for data analysis in behavioural social science studies (Henseler & Chin, 2010). Therefore, this study adopts the PLS path modelling, which is known as convergence of interactive model. Table 2 depicts the latent constructs reliability of data. Composite reliability is measured using by Dijkstra–Henseler's rho (ρA), Jöreskog's rho (ρc), and Cronbach'salpha (α) in PLS. Dijkstra & Henseler (2015) declared that their rho (ρA) is the most reliable test for consistent reliability in PLS. The minimum score for consistent reliability is 0.7. Table 2 shows that all three components have more than 0.7, which is considered an acceptable consistency. Fornell & Lorcker (1981) stated that the minimum cut of value for each latent construct is 0.50. Items loading less than 0.50 are removed. Thus, the results confirmed the high reliability of the latent constructs. The AVE score is above 0.50 (Hair et al., 2017) and item loadings are above 0.70, which also confirming the high reliability of the constructs.

According to Henseler et al. (2016) HTMT value should be below 0.85 to 0.90 to have discrimination between constructs. Table 3 clearly shows there is no discriminant validity exists between the constructs.

This study examined the structural relationship among Product Information, Hedonism/Pleasure, Good Economy Value of the product, Adding ‘Like Clicks’ and Intention to buy a Product on Facebook advertisements. Based on the proposed model, the results supported that millennial add ‘Like Clicks’ based on product information and economic value of the product not on hedonism. The result confirmed that millennials are advice seekers from their Facebook friends, before they intend to buy any products and ‘Like Clicks’ genuinely influence the consumers’ to buy the product. The result is consistence with that of previous studies that claimed online purchasing influences on product information (Ling, 2010; Wolin et al., 2010); and good economic value of the product (Wolin et al., 2012; Powers et al., 2012; Reuters & Ipsos, 2012). Millennial are highly conscious of their spending. They like to compare product prices and usability, quality and value of product from the comments found in Facebook advertisements. However, the result contradicting with Thamaraiselvan et al. (2005) findings, that good economic value is not significant in India where as it is significant in Malaysia. It result shows that there is cultural difference in buying product among millennials. The hedonism does not significantly influence to add ‘Like Clicks ‘on the Facebook advertisements. One of the possible reasons is that millennial are highly cognizant when they add ‘Like Clicks ‘on the advertisements. They do not simply add “Like Clicks’ for pleasure, when they see advertisements on Facebook.

The Uses and Gratification Theory (UG) of has been used for decades as a main theory for the usage of social media research. According UG theory people, obtain gratifications through entertainment and informational on social media networks. Based on UG theory, the study confirmed that product information and economic value for money of the products are the satisfaction factors that gratifying the millennial to add ‘Like Clicks ‘to the Facebook advertisements. 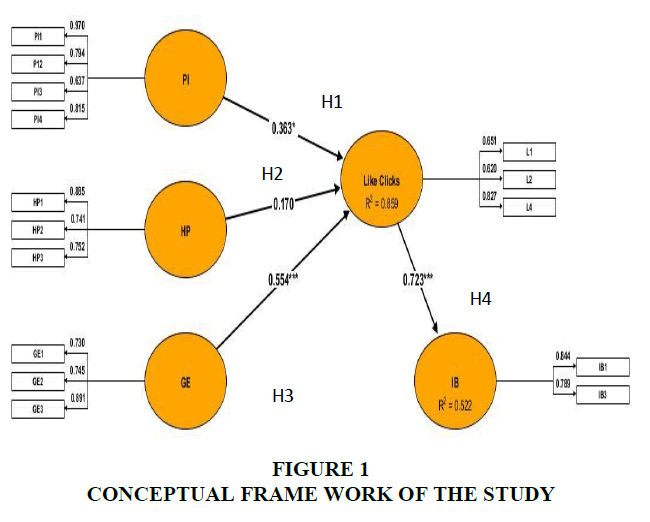 The participants of this study are millennials. Hence this research recommends that future studies, compare, different countries and compare the factors influence them to add Like Clicks and the relationship with intention to buy the products. Moreover, this study focused on reasons of adding ‘Like Clicks’ on Face book advertisements. It would be interesting to investigate further on ‘Share Clicks’ and other commands on Face book advertisements.

Lee, R. (2017). Samsung Galaxy Note8 review: This is how you make a comeback | SoyaCincau.com. Retrieved December 12, 2017, from http://www.soyacincau.com/2017/09/06/samsung-galaxy-note8-review-this-is-how-you-make-a-comeback/?utm_source=SoyaCincau.com&utm_medium=web&utm_campaign=sidebar

Nielsen. (2011). Beyond clicks and impressions: Examining the relationship between online advertising and brand building, 6. Retrieved from http://www.nielsen.com/content/dam/corporate/us/en/reports-downloads/2011-Reports/Nielsen-Beyond-Clicks-and-Impressions.pdf