The Use of Data Mining to Improve Breast Cancer Diagnosis

Healthcare organizations currently employ predictive analytics to improve patient care. Using data mining models to predict breast cancer is significant for improved care outcomes and patient experience.Providing data-driven decision-making process. Furthermore, historical records help to create models that aid disease detection at an early stage, which might also positively impact care outcome and patient experience. Breast cancer screening is a common service offered by healthcare providers. The study aims to evaluate the performance of five data mining algorithms for the prediction of breast cancer. Five data mining namely deep learning, naïve base, generalized linear models, support vector machines and random forest are applied to predict breast cancer. Four metrics will be used to assess the performance and highlight the best classification model. Deep learning yielded higher performance results on all metrics and ranked the variables based on their importance in building the classifier. Deep learning algorithms can be used successfully to predict breast cancer. Glucose and Resistin were the most important in the classification process. Therefore, high levels of these variable need to be monitored.

Breast cancer is one of the fatal diseases globally (Araújo et al., 2017), and is the common widespread cancer in women that has attracted notable attention from doctors and experts (Li & Chen, 2018). Moreover, breast cancer screening is extremely pivotal to detection at an early stage and increases the likelihood of auspicious treatment outcomes (Silva et al., 2019). Early detection of the disease is crucial to improving the survival rate of patients (Rahman et al., 2020). In order to detect the disease, women worldwide are encouraged to undergo blood testing and other diagnostic procedures regularly based on their age. Traditionally, the approach to breast cancer research has been biological and clinical in nature. Research has showed that it is essential to identify the underlying mechanisms and characteristics, as well as the most significant genetic factors responsible for the disease through diagnosis of patients with cancer (Maniruzzaman et al., 2019). However, breast cancer diagnosis typically entails detection using mammographic examination and self-reported symptoms (Ryerson et al., 2015). Subsequently, a breast tissue biopsy is performed and examined in abnormal cases to check the possibility of malignant tissue growth. Despite the popularity of mammography, it is not regarded as an effective technique owing to its low sensitivity and low detection accuracy (Rahman et al., 2020). Therefore, more sensitive detection techniques have been developed based on other biomarkers measured using blood analysis to improve the accuracy of breast cancer diagnosis (Mathelin et al., 2006).

Recently, physicians in the medical domain have initiated new diagnostic procedures that rely on data mining tools to refine the traditional approach and improve the probability of early detection of the disease. This will better inform the physician’s decision, improve efficiency of the process, and reduce treatment costs. The application of such efficient models is vital to obtaining accurate and timely predictions and reducing mortality rate. Artificial intelligence, data mining, machine learning techniques, and other tools are utilized to create efficient and robust prediction models (Livieris et al., 2020). Argue that applying predictive models to routine consultation and blood analysis data will significantly advance the screening process of breast cancer (Patrício et al., 2018).

The dataset generated by (Patrício et al., 2018), which was used by the research, involved the collection of blood samples for 116 women, including healthy (control) women. The data that were gathered for each woman indicated age, height, weight and menopausal status, where the latter showed if the participant was at least one year post-menopausal, or signified a bilateral oophorectomy. In order to obtain the BMI (in kg/m2) the weight (in kg) was divided by the height (in m2). The dataset was randomly separated into two subsets, 70 percent of which was training data utilized for constructing breast cancer classifiers, whereas 30 percent represented testing data applied in paradigm evaluation. Subsequently, both data mining models were applied and the best paradigm was chosen by using several performance metrics.

Researchers have been motivated by the evolution in data mining and data science to capitalize on vast quantities of data (known as “big data”), and also to use the available data to generate value. It is only since big data recently appeared that data mining has become prominent, despite that fact that it is not a new phenomenon (Moro et al., 2019). Progression in data science and the availability of massive volumes of data have been advantageous to the healthcare sector in the same way as other disciplines have. Furthermore, in healthcare operations, big data occupy an essential function which involves various illnesses as well as the availability of personalized treatment of patients leading to enhanced results (Alexander & Wang, 2017 ). The effectiveness and safety of such treatment is helped by the development of predictive paradigms (Bibault, Giraud & Burgun, 2016).

Deep learning (DL) may be defined as is a non-linear and multiple-layered algorithm (Nosratabadi et al., 2020) which imitates the human brain and learns tasks by applying artificial networks (Zhang et al., 2019). In order to create “deep networks”, the layers, each of which is composed of basic units known as neutrons, are connected and sequentially stacked (Serre, 2019). For the purpose of resolving tasks, such connections are able to obtain information from raw data because they are trained on data. Training data are used in order to prepare the weighted connections by modifying the connection weights, and consequently used to establish the link between input and output (Zhang, 2019).

Generalized Linear Models (GLM) can be described as statistical processes grounded on advanced regression analysis which extend the linear paradigm to enable the dependent variable to be linearly associated with the covariates and factors by means of a specific connection function. Furthermore, GLM can be successful in categorizing data with a discrete dependent variable (Crisci, Ghattas & Perera, 2012).

Naïve Bayes (NB), which is grounded on Bayes’ theorem, can be defined as a probabilistic classification algorithm. It belongs to a group of algorithms which assume class conditional independence, whereas every feature makes an important contribution to the result. In displaying a high performance, NB functions better than more sophisticated classification algorithms, particularly with categorical data, and it computes the posterior probability of each term representing a class:

The Random Forest (RF) algorithm which merges multiple decision trees utilizes an independent subset in the course of the training phase. It also examines every decision tree’s output, and its eventual result will be according to a majority vote and, subsequent to training, is used to categorize new cases. It is also able to process high data multicollinearity and dimensionality successfully (Guidotti et al., 2018; Belgiu & Drăguţ, 2016; Kononenko, 2001).

As a non-probabilistic algorithm, the Support Vector Machine (SVM) performs binary classification assignments by taking a training data subset as input and constructing a hyperplane which serves as a decision boundary. It also seeks an optimal hyperplane with the ability to retain the maximum distance between the various classes (Guidotti, 2018). Table 1 depicts a Confusion Matrix (CM) which indicates the real labels as against the predicted ones for two dataset classes. In order to investigate the DL paradigms’ prediction performance, four metrics were employed. These were sufficiently accurate to evaluate a classifier’s preductive power as well as the precision, sensitivity and F1-score which indicates the harmonic mean of precision and recall (Rahman, 2020; Akben, 2019; Livieris, 2018). The value of the F1-score was between 0 and 1, with 1 being the best and 0 the worst, and an increase in this score signified that the paradigms were more effective (Li & Chen 2018).

This section presents the results of the proposed classifiers, namely DL, GLM, NB, RF and SVM. Presented in Table 1 and Figure 1 a summary of the performance metrics for the classification models. 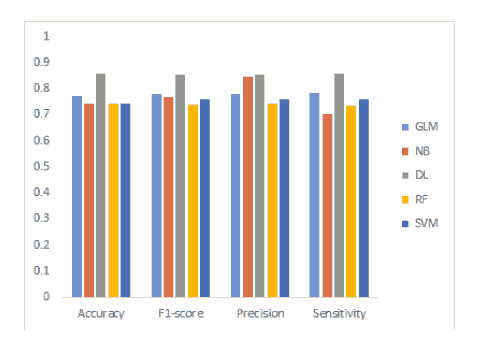 The bar charts in Figure 2 display the importance of the variables used in developing the DL ranked in descending order. It appears that glucose, Resistin, BMI, and Insulin had a higher effect on the classification of cases by the DL which highlights these variables as the most important indicators for diagnosis of breast cancer. High levels of these variables may require further careful attention. 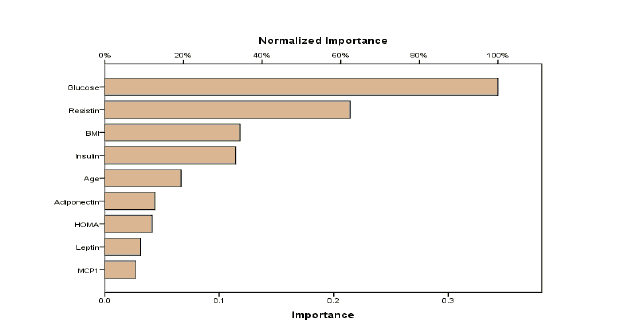 The DL algorithm generated the highest performance with 85.71% accuracy, GLM yielded 77.14%. Conversely, NB, RF and SVM achieved 74.29% classification accuracy. The sensitivity of the SVM outperformed the other classifiers. Sensitivity of DL 85.83%. NB achieved the lowest sensitivity of 70.00%. Additionally, DL and NB precisions were 85.36% and 84.48% respectively which outperformed the other models. Furthermore, DL yielded the highest F1-score of 85.59% which outperformed the other classifiers. Overall, the results of the four metrics suggest that DL algorithm reveals better performance than other classifiers. This is in contrast to the study by (Li & Chen, 2018) which achieved F1-score of and 78% but the accuracy was 74.3% for the RF model which is close to the results of current study. Yet, the SVM model in their study yielded 71.4% and 76.2% accuracy and F1-score, respectively. The study by (Silva, 2019) used an artificial neural network model yielded 73.8% for accuracy, however the DL model used here achieved 85.71%.

This study used five data mining models, namely DL, GLM, NB, RF and SVM to detect the presence of breast cancer using a real dataset which evaluated attributes including age, BMI, Glucose, Insulin, HOMA, Leptin, Adiponectin,Resistin, and MCP-1. Accuracy, sensitivity, precision and F1-score were the criteria used to assess the predictive accuracy of the developed models. The results indicated that DL yielded higher performance results on all metrics and ranked the variables based on their importance in building the classifier. Additionally, Glucose and Resistin were the most important in the classification process. This indicates the high levels of these variable need to be monitored.

These results could help to reduce misdiagnosis and provide suitable treatment for breast cancer patients (Li & Chen, 2018). Additionally, screening for breast cancer using a blood sample permits detection of the disease at an early stage increases the opportunity for auspicious treatment outcomes, if discovered in a timely manner, and decreases the overall cost.

Kononenko, I. (2001). Machine learning for medical diagnosis: History, state of the art and perspective. Artificial Intelligence in medicine, 23(1), 89-109.