The Variable "Labour and Professional Situation" of People with Disabilities1

People with disabilities usually face additional problems, which prevent them from launching an entrepreneurial activity. Such problems may be related to the competencies that they have acquired. In this regard, the variable related to the labour and professional situation has become so relevant that the focus of this article is on an approach to entrepreneurship considering the labour and professional situation of people with disabilities. Following the conducted survey, the obtained results indicate that for a significant part of those unemployed who are thinking of launching a business or have had a business, the reasons for not doing so are, in first place, the lack of economic resources when setting up a business, and, in second place, the doubt about the business profitability.

People with disabilities represent a vulnerable collective who, on occasions, have been conditioned by situations of exclusion. That has had its manifestation in relation to the labour field and has reduced the possibility that such collective can contribute to social development. Fact is that people with disabilities have greater problems to access to the labour market. This situation has a considerable impact on their social, psychological and economic development. Evidence of this lays on the fact that, according to data from the National Statistics Institute, 35% of people with officially recognised disabilities were active in 2017 and that the activity rate was 42.7 points lower than that of the population disabilities, while the unemployment rate was 26.2%, 9.1 points higher than that of people without such disabilities. These figures indicate the need to pay attention to people with disabilities and to include them actively in the labour market. To this respect, it is also necessary to know better the possibilities of entrepreneurship within this collective, in order to be able to analyse the competencies that these people have or should have and so to improve their labour situation.

Regarding this situation, the objective of this article is to characterize entrepreneurship both according to the labour situation of people with disabilities and considering competencies as a key issue in the development of their entrepreneurial activity: On one hand, since the initial phase; on the other hand, during the legal proceedings which are required for the entrepreneurship and, last but not least, in relation to the choice of the type of activity to be developed. Thus, following the obtained data, our analyse of the current situation of disability sheds light on its relation to the variable “labour and professional situation”, so that we can provide a series of conclusions on the developed research.

Even if numerous social achievements have taken place in recent years, access of people with disabilities to environments, processes or services is sometimes full of obstacles, what hinders their personal or professional development; thus, being labour insertion one of the problems they encounter in their daily lives.

Therefore, despite the introduction of a set of legislative measures aimed at reducing barriers to entry into the labour market, disability is still associated with long-lasting labour disadvantages (Jones, 2016). Such disadvantages must be approached. In this direction, disability can affect the preferences of both the labour activity and the entrepreneur, what makes it really significant to know which are the situations that favour entrepreneurship among people with disabilities. These difficulties, in the case of the worst labour market conditions, are related with greater public expenditure in as much as it is necessary to face such situations (Black et al., 2002, Sloane, 2015; Kerwin et al., 2018).

There is no doubt, that devising training and/or retraining strategies can be essential elements this collective since it improves their labour insertion levels. In this regard, the fact that competencies play a fundamental role in labour development, especially when developing a business, must not be ignored. For this reason, this survey has been conducted, in order to be able to enhance knowledge on these issues so that their labour situation and the competencies that they consider necessary for their future development are put in the spotlight.

This article uses data which result of a survey which was developed by the University of Murcia within the framework of the Project "Disability and entrepreneurship. Competence Analysis" (CSO2016-75818-R) and was funded by the National R+D+I Plan. It was conducted between November and December 2018 on a sample of residents in Spain who have physical, sensory and organic disabilities. The technical sheet of such survey appears referenced in the Article of Barba-Sánchez, published in this review.

Basing on the recorded results of the conducted survey, it is distinguished, according to the main labour activity of the respondents, between: entrepreneur, employee, unemployed person and inactive person (considering as such student, person who is dedicated to unpaid domestic work and those who do not know or do not answer NS/NC). In such a vain, Figure 1 indicates that 40.9% of unemployed are thinking of launching their own business, while 45.5% have had one, but abandoned it. 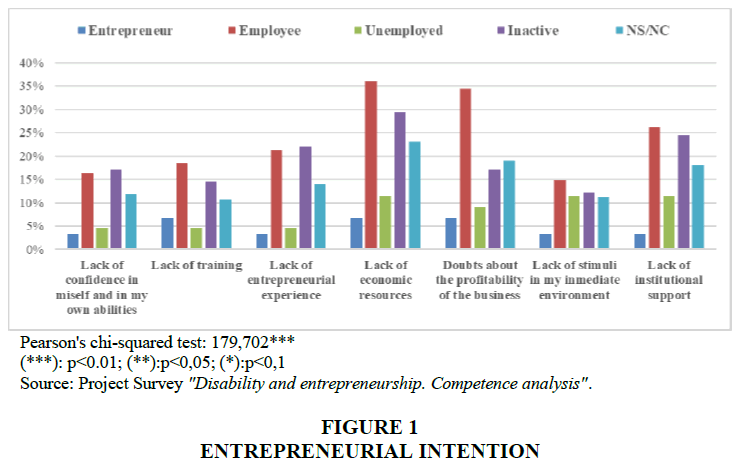 As far as the causes for not launching any business are concerned, Figure 2 shows that the main drawback for all groups when starting up the company is the lack of economic resources, followed by doubts about the profitability of the business. The Pearson's chi-squared test reach high levels of significance. Such levels result from the analyse of given that each of this factors, which vary from 0.000 to 0.004. 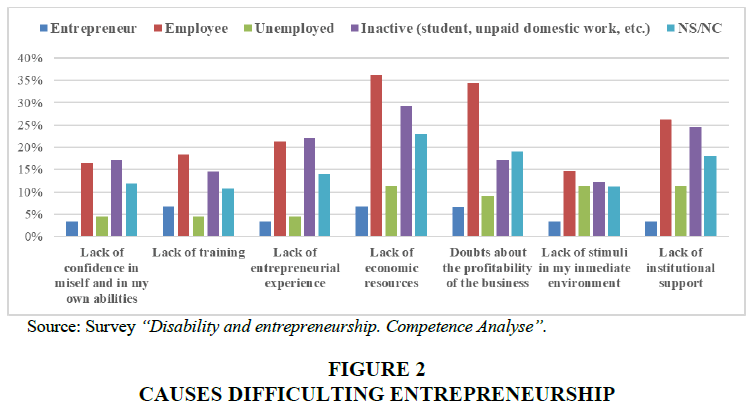 The Figure shows the summary of the factors ranging from 1 to 5 whose score, according to the likert scale, reached the two highest levels.

According to the model on the activity sector, the service sector occupies first place for it was the most demanded one by all considered groups (values ranging from 66.7% for the unemployed to

87.5% for the inactive). Nevertheless, there is the exception of the group “who does not know or does not anwer” (NS/NC), as they would opt entirely for the industry-construction sector.

Concerning those who would launch the business and run it, Table 1 indicates that, on one hand, entrepreneurs (48.1%) prefers to do it individually, while salaried employees (42.9%) and inactive population (55.6%) would do it collectively; on the other hand, unemployed people obtained the same result in both cases (44.4%).

Regarding the company’s seniority, other than the group of entrepreneurs whose enterprises are usually more than 42 months old (77.8%), the rest have not undertaken yet. Therefore, it is obvious that only entrepreneurs can have employees, having 37% of them less than 3 employees and also 37% of them no employees at all.

Further on Table 1, it is also worth mentioning that, when respondents were asked about the reason for their entrepreneurial venture, other than employees, the rest will launch their company mainly out of necessity.

This is manifest according to the fact that, other than employees, whose reason for launching a business is to achieve a personal challenge (38.7%), the remaining respondents do so to better their income or in order to increase their personal independence.

To conclude the result analysis, we will deal with Figure 3, which indicates why respondents decided to give up their entrepreneurial activity. In this vein, the fact that the company was not profitable stands out and occupies the first place among all collectives with the exception of those who would not know or would not answer (NS/NC). 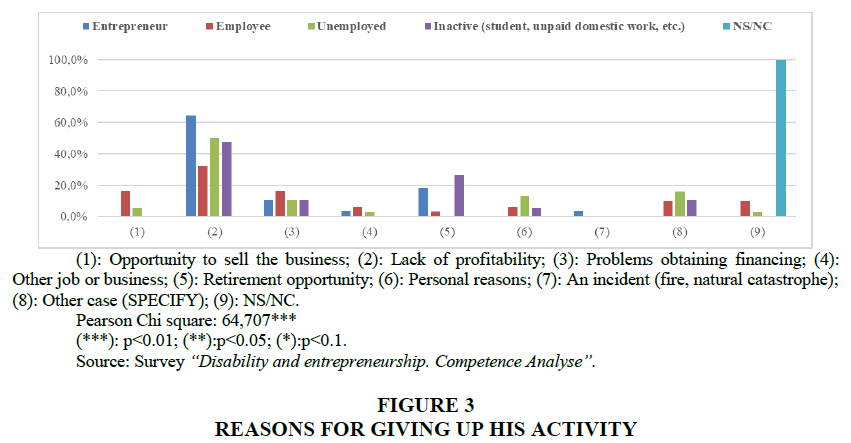 Figure 3 Reasons for Giving up his Activity

Generally speaking, difficulties for entrepreneurship exist. On a regular basis, they are on the agenda of public authorities, who try to improve that situation with greater or lesser success lauching measures which encourage developing business activity. This already complex situation is, even more difficult in the case of people with disabilities who try to launch their own business. Therefore, special attention on that essential issue is required. Thanks to the conducted survey and to the fact that we have mainly considered the labour or professional situation of the people surveyed, it has been made possible to improve the characterization of some of the problems related to entrepreneurship and the necessary competencies to be able to develop entrepreneurship.

This research study indicates that those factors that affect individuals when launching a business, in most cases, will vary depending on the analysed profile. Thus, for example, while some prefer to launch a business with the aim of achieving a personal challenge, others do so in order to improve their income, while some prefer to start a business alone, others prefer to do so collectively. Nevertheless, there is greater consensus concerning those problems which are generally considered that they must be faced in order to improve entrepreneurship of people with disabilities. Among those problematic issues where there is agreement is lack of economic resources or doubts about the profitability of the business. Therefore, it is necessary to continue to address this situation, not only today, but also in the future.

Sloane, M. (2015), Where are the workers? Technological change, rising disability and the employment puzzle of the 2000s: A regional approach. working paper.