In Pakistan, small and medium enterprises (SMEs) are facing business challenges for the sustainability and growth. In developing economy SMEs plays a crucial role in creating employment, empowering society, increasing export, innovation, GDP and providing raw materials to the big industries (Hassan & Kashif, 2016; Wang et al., 2020). In a knowledge-based economy, the paradigm of the business organizations shifted from industrial based to a knowledge based economy (Agostini et al., 2017); (Khalique et al., 2018); (Khalique et al., 2014); (Ruzzier et al., 2020); (Sharabati et al., 2013). In a knowledge-based economy, intellectual capital has appeared as a competitive asset for the success of organizations. The concept of entrepreneurship has transformed from traditional entrepreneurship to intellectual entrepreneurships.

More information about the products and services bring more competition and challenges to small and medium enterprises. To fascinate and hold customers, SMEs are required to shift their mind-set and procedures from traditional entrepreneurship to intellectual entrepreneurship. There is no doubt that the conventional business methods have no more survival in a present competitive business environment and the survival, and the growth of SMEs are at alarming situation (Nor-Aishah et al., 2020). Moreover, in Pakistan mostly SMEs are still using outdated and conventional business procedures and practices (Khalique et al., 2015). Pakistan is a developing and SMEs based economy. Despite of the significant contribution of SMEs in economy SMEs are facing numerous threats and their survival and performance is undermine and at high risk of failure. Unfortunately, according to the Index of Ease of Doing Business (IEDB) perspective “Pakistan has ranked at 144 out of 190 countries in the world (World Bank, 2017). Khawaja (2006) argued that only 19% of newly established SMEs have less than 5 years life and only 4% of firms survive up to 25 years in Pakistan”. It showed that the failure rate of SMEs in Pakistan is very high and 81% of SMEs quit from the market within first 5 years of their operation. These alarming signals are pushing academicians and researchers to explore the foremost grounds of success and failure of SMEs. In competitive business environment there is a great demand to comprehend the spirit of business challenges and opportunities because the dynamics of enterprises has already shifted from conventional based to intellectual based. Subsequently, it is indispensable for SMEs to understand the new concept of entrepreneurship, which known as intellectual entrepreneurship (IE).

Intellectualism is considered as one of the most important components of intellectual entrepreneurship (Johannisson et al., 1999). It includes learning, knowledge as well as informed and critical thinking (Abosede & Onakoya, 2013). Zalesna (2012) argued that the “existence of business enterprises relies on employee’s intellectualism and hardworking essence”. Sennikova (2016) argued that mainly intellectuals are involved in business activities and due to their dealing, flexibility and knowledge they can create extraordinary enterprises in conventional environment. In the same way, Khalique et al. (2021) stated that the intellectual entrepreneur is primarily based on the rigorous background of the intellectualism.

Gardner (2007) argued that the intellectual capabilities are required and nurtured by business leaders in the future. These intellectual capabilities were expressed as five minds such as disciplinary mind, synthesizing mind, creating mind, respectful mind and ethical mind. Davis & Gardner (2012); Khalique et al. (2019) stressed the cultivation of these five minds help individuals to become good citizens and knowledge workers. Each mind reflects the specific set of cognitive abilities and attitudes of thinking that individual need to tackle the business challenges, exploit the opportunities and become an active and successful entrepreneur. In addition, they argued that these five minds should be considered as more than theoretical constructs and these are very crucial competencies for individuals to be effective and productive in organizations.

According to (Meyer, 2003); academic who is interested in establishing a fast growing venture. Beckman and Cherwitz (2009) stated that the academic entrepreneurship as an “intellectual enterprise,” in which “universities cooperate with local communities to create new values or ideas”. Khalique et al. (2021) stated that the “prime function of universities is to provide quality education and research culture in the society and it will help to improve the national innovation system”. In addition they argued that there is no doubt that the “academic entrepreneurship is a one of the most important components of the intellectual entrepreneurship and it can be measured by the professional graduates having universities/institutions educations”.

Foundation of the Theory of Intellectual Entrepreneurship 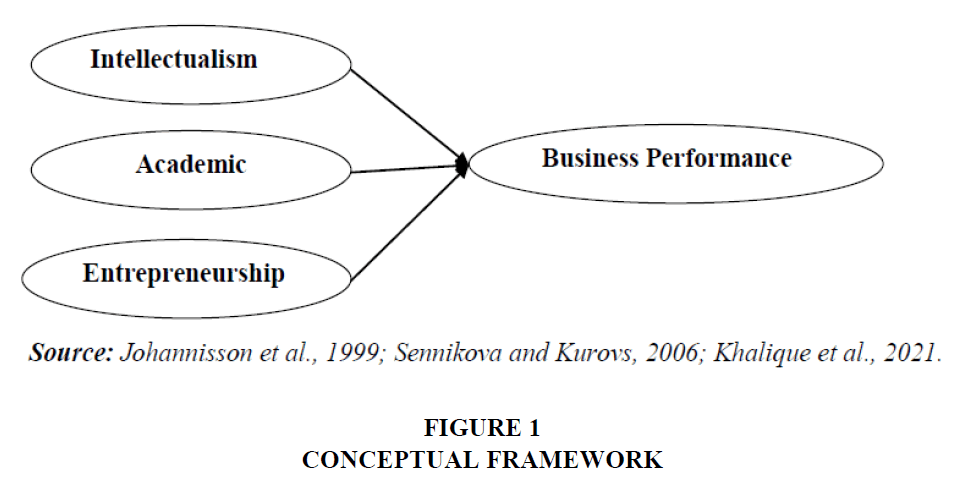 The employed independent variables and dependent variable were grasped through questionnaire items that were developed from the seminal work of (Beckman & Cherwitz, 2009; Gardner, 2008; Johannisson et al., 1999; Khalique et al., 2014; Sennikova & Kurovs, 2006). The questionnaire items were reported in Table 1. A Five Points Likert Scale where 1 = strongly disagree and 5 = strongly agree was used to grasp the perception of respondents about the employed unobserved constructs. In this research, the intellectual entrepreneurship was measured by three distinct dimensions namely intellectualism, academic and entrepreneurship.

In this study, these three dimensions of intellectual entrepreneurship were considered as independent variables while the business performance was used as a dependent variable. To measure the business performance of SMEs 8 items were generated using the work of various academic researchers such as (Bagorogoza & de Waal, 2010; Khalique et al., 2014; Sharabati et al., 2013). The questionnaire items were addressed to respondents to “take on the role as their employer’s representative” and to respond to items from an overall organization perspective. In effect, each respondent replied as a proxy respondent for their whole organisation. Moreover, the targeted respondents were encouraged to provide feedback on the generated items if they have difficulty to understand but no such complain was received.

The structured questionnaire survey forms were distributed to the targeted respondents of selected SMEs. The questionnaire forms were addressed to CEO, Managing Directors, Managers, Senior Managers, Junior Managers, Assistant Managers and staff of the SMEs operating in knowledge intensive SMEs operating in Islamabad and Rawalpindi. In this study, the individual was considered as the sample unit. For empirical data collection, a total of 400 questionnaire survey forms were distributed and 210 were returned with response rate of 52.50 percent.

Table 2 reported that the measurement model is established and the values of AVE and CR were reflected that the convergent validity of employed constructs was acceptable and met the suggested thresholds (Khalique et al., 2020).

Notes:  *The off-diagonal values are the correlations between the latent constructs and diagonal are square; values of AVEs.

To test the proposed research hypotheses structural model was used, the path coefficients and their corresponding t-values were generated through the bootstrapping sub-samples with 5,000 cases as suggested by (Hair et al., 2011; Khalique et al., 2020). The R2 for the structural model is 0.405 which showing that 40.5 percent of the total variance was explained by academic, entrepreneurship and intellectualism towards the business performance of SMEs operating in Pakistan. Table 5 showed that two path relationships were appeared as positively significant at 95 % confidence interval namely (IP→ BP, ß = 0.154, t= 3.118, p<0.05 while AP → BP, ß = 0.087, t = 0.963, p < 0.05) and EP → BP, ß = 0.174, t = 1.632, p < 0.05) was appeared as insignificant contributors. Based on the empirical findings this study concluded that only one-research hypothesis was supported while remaining were not supported. In Table 5, the empirical findings reported that the f2 for intellectualism perspective (IP) has a large effect, academic perspective (AP) has medium and entrepreneurial perspective has no effect on the business performance of SMEs in Pakistan.

Like other research studies, this study also has some limitations that offer avenues for potential researches. Bigger size of respondents would give clearer picture about the result. The potential researchers can validate the intellectual entrepreneurship model (IEM) in various sectors such as banking, pharmaceuticals, garments, hotels, electronics and other knowledge intensive organizations. In this study, the cross-sectional data were used therefore, the findings of this study may not be generalized to other organizations. Future research can use longitudinal data for getting the better results.