Training and Entrepreneurship in People with Disabilities1

As a collective, people with disabilities can be sometimes integrated and in other occasions socially and professionally excluded. There is no doubt that full participation and inclusion of this group in society involves work activity. Although labour inclusion of people with disabilities is small, it is even smaller if we aim at self-employment or entrepreneurship (Manzanera, 2018). as a matter of fact, there are not only data which indicate the progress in the development of policies that facilitate the process of inclusion of persons with disabilities in the labour market, but also several studies, which confirm the impact of education in this inclusion process. The objective of the present article is to examine whether or not education also has a significant impact on one of the forms of access to the labour market of this group: entrepreneurship.

This article uses data which result of a survey which was conducted between November and December 2018 on a sample of residents in Spain with physical, sensory and organic disabilities. The technical sheet of such survey appears referenced in the Article of Barba-Sánchez, published in this review. It was developed by the University of Murcia within the framework of the Project "Disability and entrepreneurship. Competence Analysis" (CSO2016-75818-R) and was funded by the National R+D+I Plan.

The authors of this article formulate following general hypothesis: depending on the training level of people with disabilities, there will be more possibilities for these people to create new companies and they will be affected to a lesser extent by the aspects that hinder entrepreneurship.

To define the respondent profile of entrepreneurs or prospective entrepreneurs in this article, “the respondent training level” (p. 18) has been considered as an independent variable and the following ones have been considered as dependent variables: “entrepreneurship of people with disabilities” (p. 5) and “different aspects which, on one hand, hinder entrepreneurship” (p. 6) or “which, on the other hand, promote it” (p. 11), according to the importance given to them when deciding to either give up or develop a business.

As can be seen in Figure 1, having a level of education up to Compulsory Secondary Education (ESO) motivates to launch a business or to have intentions to do so. In such figure, there is evidence that, on one hand, 32.6% of persons with disabilities and such a level of education could in fact be considered entrepreneurs or prospective entrepreneurs because they have a business or intend to have it. On the other hand, 37%, even if they had a business, gave it up. Last but not least, the resting 30.4% of persons with disabilities and such a level of education neither have a business, nor are interested in having one. While these data are similar to those offered by people with disabilities who hold a High School Degree or an Intermediate Vocational Training Degree, they differ with respect to those who pursued Higher eHducation or Superior Degree Vocational Training studies, since the percentage of people with disabilities who have launched a business or intend to do so is between 10 and 11 percentage points higher when they have reached that education level. Therefore, the relationship between a higher educational level and a higher predisposition to entrepreneurship is obvious. 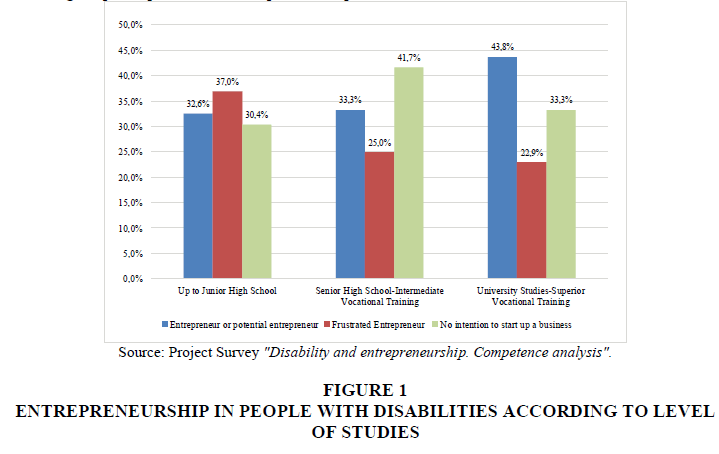 Among the aspects that hinder entrepreneurship, interviewees place them on a scale where 1 means "nothing" and 5 "a lot". In that scale, "lack of economic resources" receives the highest average value (4.0). It is followed by "doubts about the profitability of the business" (

=3.8) and "lack of institutional support from the administration, either national or regional" (

=3.7). Less important for people with disabilities is the aspect "lack of confidence in their abilities" (

=2.7), and even less "lack of stimuli in the immediate environment (family, friends, associations)" and "training deficiencies" (both aspects with an

Thus, lack of training is not perceived to a large extent as one of the aspects that negatively affect the self-employment initiative of people with disabilities. However, when we analyze these aspects according to the level of studies of the interviewees, we observe how "training deficiencies" have following average values: 3.3 is the average among those interviewees who have achieved a level of education up to Junior High School; 3.1 among those who have studied at Senior High School or a Vocational Training Intermediate Degree Institution; and 2.4 among those who have pursued higher Education Studies. In Table 1, we also check how, in general, with respect to all aspects, the importance given to training by the interviewees is lower among those who have pursued studies at a Higher Education (University-level education) or at a Superior Degree Vocational Training institution.

On the other hand, it is noted that, for 53.8% of the population with disabilities who start up a business, the main motivation to launch a business, given the scarcity of work alternatives in the labour market, has been the need to find a job while, for 37, 6%, the main motivation to start a business has been having identified opportunities which were not used in the market. Comparing this data is with that of the general population, who develop a business, we find notable differences: 38.3% have started up a business "by necessity" and 68.5% "by opportunity" (GEM, 2018).

In Figure 2, it can be observed that, although in all cases there is a higher proportion of people with disabilities who indicate that they launch a business out of "necessity" than such of those who do it out of “opportunity”, however, the more the level of studies increases, the more entrepreneurs with disabilities start a business out of "opportunity" (almost 19 percentage points of difference). This allows us to affirm that, depending on the educational level, there is greater similarity. In relation to entrepreneurship, between people with and those without disabilities. 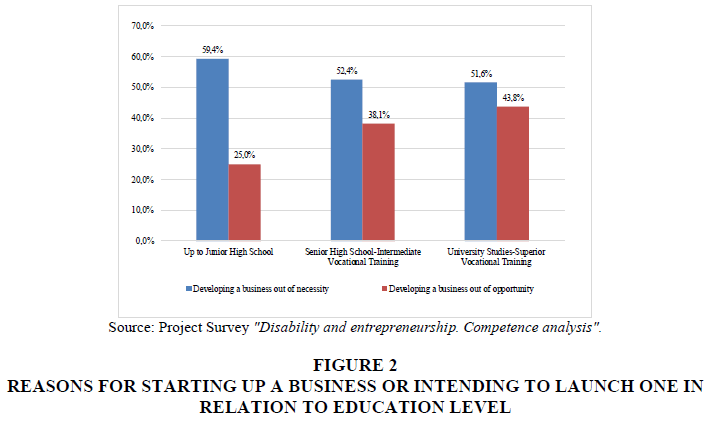 The analysis sheds light on the fact that, depending on the educational level, people with disabilities will have access to the business world to a greater or lesser extent. In fact, that collective is more or less vulnerable to the aspects that hinder entrepreneurship due to the training level. In addition to that, most of the times better training of people with disabilities means that they do not make the decision to launch a business because they lack better options in the labour market, but rather because they perceive business opportunities which have not been used by existing companies.

Delmar, F., & Davidsson, P. (2000). Where do they come from? Prevalence and characteristics of nascent entrepreneurs. Entrepreneurship & regional development, 12(1), 1-23.

Le Roux, N., & Marcellini, A. (2011). The professional integration of students with disabilities in France. Review of questions and lines of research. ALTER-European Journal of Disability Research, 5(4), 281-296.

ODISMET. (2016). Observatory on disability and labor market. The situation of people with disabilities in the labor market. Zero Report. Revista Española de Discapacidad, 2(2), 271-272.