Companies carry out tax management to minimize tax. Tax planning reduce the tax burden as maximum as possible to increase efficiency and competitiveness (Suandy, 2016). One of the tax planning methods used is the transfer pricing. Companies do transfer pricing to maximize profits and minimize taxes since taxes are considered a burden that will reduce profits.

Ernst & Young in (2010) conducted a survey entitled Global Transfer Pricing Survey with Taxpayer respondents from Europe, America, and the Asia Pacific. The survey results indicate that taxpayers in various countries consider transfer pricing as the most critical taxation issue.

The Directorate General of Taxes has issued a regulation regarding transfer pricing in Article 18 of Law Number 36 Year 2008 concerning Income Tax. Article 18 paragraph (3) of the Income Tax Law regulates that according to the principles of fairness and business normality, The Directorate General of Taxes has the authority to re-determine the amount of taxable income for Taxpayers who have special relationships with other Taxpayers.

One factor that influences a company's decision to do transfer pricing is bonus mechanism at companies. The bonus scheme implemented by companies will affect management behaviour. They will try to manipulate profits to look good so that the bonuses earned will be high and remuneration will increase. One of the ways to increase profits is by minimizing the tax burden through transfer pricing.

State revenue is measured by multiplying the current tax rate with company profits. State revenue shows the company's contribution to the state in the form of taxes paid. Yuniasih et al. (2012) found that a more significant tax burden causes companies to carry out transfer pricing. The probability of companies to carry out transfer pricing practices will increase if a country sets a high tax rate. Companies with high profits in countries with high tax rates will shift their profits to countries classified as low-tax countries.

The study combines variables from the previous studies regarding the effect of state revenue and bonus mechanism on transfer pricing decisions. The tax minimization variable, which acts as a moderating variable between state revenue and bonus mechanism, has not been widely studied in the previous research studies. The measurement for the dependent variable is also different from most of the measurements used by the previous researchers, where this study uses RPTAL (Related Party Transaction of Assets and Liabilities) to measure transfer pricing. This is different from the previous studies that use dichotomous measurements, such as in the research conducted by Noviastika et al. (2016), where transfer pricing is measured with the presence or absence of sales to related parties.

Agency theory explains a relationship between shareholders who act as principals delegating authority to managers as agents. The managers are given the duty of managing the company to get the profit expected by the principals. They report to the principals to determine whether the company's performance is running according to the target. The managers will get incentives or remuneration for the level of achievement of success in managing the company (Anissa & Handayani, 2015).

Agency theory also explains that management chooses accounting methods to increase earnings in financial statements, which can distort the quality of financial statements (Febriyanto & Firmansyah, 2018). Mispiyanti (2015) explained that agency problems arise due to opportunistic actions taken by managers as agents to precede their interests as opposed to the interests of principals. According to Septiyani et al. (2018), Agency theory states that there is information asymmetry between managers (agents) and shareholders (principals) as managers know better about the company's internal information and prospects in the future than shareholders who do not have access to the information.

Tax management through tax avoidance is carried out because of differences in interests between managers and shareholders. On one side, managers as agents want an increase in compensation, while shareholders want to reduce tax costs (Jensen & Meckling, 1976).

Positive Accounting Theory by Watts & Zimmerman (1986) explains how accounting policy making can be a problem for companies and related parties with financial statements. This theory is also used to predict which accounting policies the company should choose under certain conditions.

Klasen in Lo et al. (2010) found evidence that there was a shift in earnings that multinational companies had made in response to changes in tax rates in Canada, Europe, and the United States. Yuniasih et al. (2012) found that a more significant tax burden causes companies to carry out transfer pricing. The tax burden shows the company's contribution to state revenue.

To reduce the total tax burden, the company chooses to carry out tax management by making transactions with other companies located in other countries that are still affiliated. Companies' probability of carrying out transfer pricing practices will increase if a country sets a high tax rate. Companies with high profits in countries with high tax rates will shift their profits to countries with low tax (Aharony et al., 2010).

The bonus plan hypothesis presented in Positive Accounting Theory explain the relationship between bonuses and profits. Managers at the company with the bonus mechanism will tend to choose accounting procedures with changes in reported earnings from future to present periods. In their research, Lo et al. (2010) explained that the tendency of management to take advantage of transfer pricing transactions to maximize the remuneration of the bonuses they receive would increase if bonuses are based on profit. Pramana (2014) also argues that managers will prefer to take policies to regulate net income to maximize the bonuses they receive, including by doing transfer pricing. The greater the company profit generated, the better the directors' image in the eyes of the company owner. Several studies, such as Hartati et al. (2015), Pramana (2014), and Saraswati & Sujana (2017), proved the positive effect of the bonus mechanism on transfer pricing decisions.

H2: Bonus mechanism have a significant positive effect on the decision to carry out transfer pricing.

Tang (2016) states that tax revenue can be one incentive for tax avoidance. Companies can make tax savings by diverting company profits from countries with high tax rates to countries with low tax rates.

H3: Tax minimization significantly moderates the effect of state revenue on the decision to carry out transfer pricing.

The bonus mechanism will affect the company's strategy. Managers will try to get bonuses by increasing company profits, one of which is by doing transfer pricing. The greater the company profit generated, the better the directors' image in the eyes of the company owner. The bonus plan hypothesis explains that company managers tend to prefer methods that increase profit for the current period (Cahyadi & Noviari, 2018; Djumena, 2009).

Figure 1 show the research model used in this study. 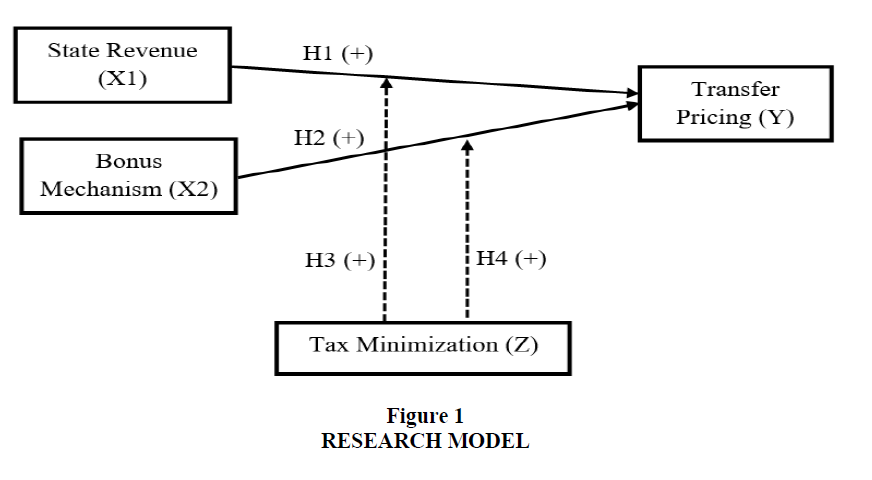 The research used secondary data in annual reports and financial reports of the manufacturing companies listed on the Indonesia Stock Exchange (IDX) in 2013-2018. The data were sourced from IDX website (www.idx.co.id) and companies' website. This study used purposive sampling technique with some criteria. The population was 145 companies, the sample was 18 companies, and the units of analysis were 108. Table 1 shows the sample selection criteria. Table 2 shows the operational definition and measurement of variables used in this study (Chan et al., 2016; Kurniasih & Sari, 2013).

The normality test is used to determine whether the research data is usually distributed or not. One of the requirements for a good regression model is that the data must be normally distributed. The results show that the data for the variables of bonus mechanism, tax minimization, and transfer pricing have fulfilled the requirements as data with a normal distribution. This can be seen from the Asymp-Sig. (2-tailed) values for unstandardized residuals have values of more than 5% or 0.05 significance, equal to 0.200, so the variables can be used to conduct regression tests (Santoso, 2004).

The results of the heteroscedasticity test through the Glejser test show that all independent variables used in this study, namely bonus mechanism and tax minimization, have a significance level (Sig.) above 5% or 0.05. This can conclude that there is no heteroscedasticity in the regression equation model used, so the regression model is feasible to predict transfer pricing (Mutamimah, 2009; Septarini, 2012).

The results of the Run Test show that the Sig. (2-tailed) value for the unstandardized residual variable for bonus mechanism, tax minimization, and transfer pricing is 0.461. This indicates that the regression model has met the requirements to be free from autocorrelation symptoms as the significance value based on the test results is more than 5% or 0.05 (0.461> 0.05).

The regression equation is:

The Adjusted R Square value is 0.146. This means that 14.6% of the transfer-pricing variable is influenced by state revenue and bonus mechanism variables and the interaction of these variables with the moderating variable of tax minimization. While the other 85.4% is influenced by other factors not included in the research model.

The Effect of State Revenue on Transfer Pricing

The state revenue does not affect transfer pricing. This result may happen because companies in Indonesia apply the Advance Pricing Agreement process under the Income Tax Article 18 paragraph 3a Law. Companies are more careful in conducting transfer pricing transactions with foreign parties even though they have a subsidiary-parent relationship.

The Effect of Bonus Mechanism on Transfer Pricing

The bonus mechanism does not affect transfer pricing. This result may occur because the companies have a Good Corporate Governance mechanism that prevents management from manipulating tax to increase their bonus. They have an audit committee with the capacity in financial supervision and audits, which can detect fraud by company management. This study indicates that the management commits to not enormously increasing profit but maintaining the company’s value.

A bonus plan hypothesis in Positive Accounting Theory is not supported in this study. The bonus plan hypothesis explains that company managers tend to choose accounting procedures with changes in the reported earnings from future periods to present periods. If their bonus depends on the net income, they are likely to increase the bonus in that period by reporting the highest possible net income as they want high bonuses.

This study supports the previous research conducted by Saraswati & Sujana (2017) and Septiyani et al. (2018), proving that the bonus mechanism does not affect transfer pricing. The explanation is that sample companies' net income data shows a stable value from year to year. This study contradicts Hartati et al. (2014), which finds that management would use more transfer pricing transactions to maximize the bonuses they receive if the bonuses are based on annual profits.

Tax minimization cannot significantly moderate the effect of the bonus mechanism on transfer pricing. This condition explains that tax minimization does not affect the relationship between bonus mechanism and transfer pricing. This may happen because the companies carry out tax planning to minimize tax burdens through other schemes such as delaying tax liability payments, optimizing tax credits, capital repatriation, tax treaty protection/facilities, and so on (Noviastika et al., 2016). The sample might already have a suitable stakeholder supervision mechanism. Good supervisions make companies reduce inappropriate accounting measurements and disclosures to reduce fraud by management.

This result does not support the bonus plan hypothesis discussed in positive accounting theory which explains that company managers seek to enrich themselves through bonus maximization by increasing the annual profit.

This study only uses related party transactions of asset and liability as a measurement of transfer pricing. Future research can use another measurement, such as related party transactions of sales and expenses. This study uses Indonesian companies as samples. Future studies can use other developing countries as samples to know whether it gives the same result.

McColgan, P. (2001). (34) Agency theory and corporate governance: a review of the literature from a UK perspective. Department of Accounting and Finance University of Strathclyde. https://doi.org/10.1021/bm900520n