Intensity to capital accumulation, size of the market and scale of the production generally serve as the key determinants of FDI in any country. It is also discovered that the imported capital goods and intermediate products work as catalysts to augment the production in the manufacturing industries. This study aims to find out the relation between Foreign Direct Investment (FDI) and manufacturing sector in India. It analyses data from 1996 to 2020. It extracts a long run cointegration between the two variables. Analysing the short run scenario, the article considers error correction model to define the short run shocks and its effectiveness on these variables. There exist thirty seven percent chances to move from short run disequilibrium to long run stable equilibrium. Also, the error correction term proves long run causality from FDI to manufacturing sector. The cumulative sum and cumulative sum square test prove the economic model to be stable. Finally, the study suggests the Indian policymakers to relax FDI inflows norms and enable an automatic route up to 74% towards all the manufacturing sectors, as done for defence manufacturing in order to augment the overall development of Indian economy.

The industrialization of Indian economy indicated a positive environment for foreign investors since 1991. Specifically, construction and power sectors were highlighted during the expansion process. Limits of investment were increased to 51 percent and more for the prioritized manufacturing industries in India. Beginning of 2000 faced a sharp hike in the valuation of foreign investment as overseas corporate bodies could invest further here. Foreign Direct Investment (FDI) inflows and manufacturing sector outputs were mutually supporting each other throughout the period of 1990.

Cross border learning through enhanced communication and capability to imitate new technology will bring forward the specific development in the manufacturing sector in India.

The relaxation in FDI policies also facilitates better production environment in Indian economy as proved by sufficient literature reviews. Ease of entry, threats for imports, and encouragement towards manufacturing production will boost the productivity curve of Indian manufacturing sector. It will be followed by decrease in average cost structure for the same. Keeping these important areas in consideration, the article concentrates on finding a relationship between FDI and manufacturing sector in India.

The emergence of service sector has been working as a driver for growth for the developing economies for long period. Employment generation is also an outcome of the enhanced productivity created by service sector. Next to service sector, the manufacturing sector played a key role in determining the growth in overall output of any economy. A substantial amount of foreign funds is highly required to generate a considerable level of manufacturing productivity growth. Both developing and developed economies are beneficial of foreign funds in generating higher proportion of output from manufacturing sector that contributes to Gross Domestic Product (GDP) in a specified economy. The global trade due to manufacturing sector’s output growth plays a crucial role in shaping the future of economic development giving way for the current study.

The article is spanned between the subsections as follows: Section two explains review of the literature. Section three describes the methods of data collection and analysis of the data. Section four illustrates findings. Section five enters the discussion. Section six provides the conclusion.

The research and development related to productivity growth especially in manufacturing is crucial as it creates the innovation in production. In this respect, the foreign funds play an important part to augment the growth in innovation as many developing economies are not making enough domestic investment to spare for the development of the same. Cross border technology transfer can only happen through conduit foreign inflow of funds in the host country. The managerial skills, the technological know-how, the production structure – are the benefits that can be reaped through FDI. The inflow also depends on the political structure of an economy, though. It is noticed that relaxation in FDI policies brings upliftment in the status of the host country along with its export facilities. Hence this article concentrates on finding the association between FDI and production sector, that is, the manufacturing sector in India and also tries to find out the long run and short run relation between them. It looks into the current Indian scenario and finds out the trend existing between these two variables, to suggest some policy measures for the economic development in India.

After reviewing all the available literature, the researchers found that not much of research has been done to find out the association between FDI and manufacturing sector. Further, different studies have deployed different definitions of manufacturing sector in their research. With, manufacturing sector being considered as a high growth sector in India, FCCI has identified the potential of this sector to reach US$ 1 trillion by 2025. Therefore with the right kind of policy support and positive measures taken by the government, this sector has the probability to account for 25-30 per cent of the country’s GDP and would create up to 90 million domestic jobs by 2025. Considering all these predictions, the current study has taken up the index of industrial production in manufacturing sector with a different econometric approach to analyse the available data and to find out the solid outcomes for the policy makers to act upon.

Wang (2009) theoretically explained the relationship between manufacturing sector output and FDI in his model. The study concentrated on establishing domestic firms with the new and enhanced technology brought by foreign firms. The study analyzed the importance of input generation through foreign market capital. The study also extracted the impact of FDI on various sector of the economy. The present article also focuses on the study conducted by Romer, (1990) and Borensztein et al. (1998) that gave importance on human capital generation with the help of foreign aided technologies.

Based on the theoretical framework, the current study analyses the conceptual framework. The study investigates the relationship between FDI and manufacturing sector expenses in India. The interrelationship between two variables is to be found out for understanding the importance of FDI on expanding the production in manufacturing sector. The conceptual model is depicted in Figure 1. 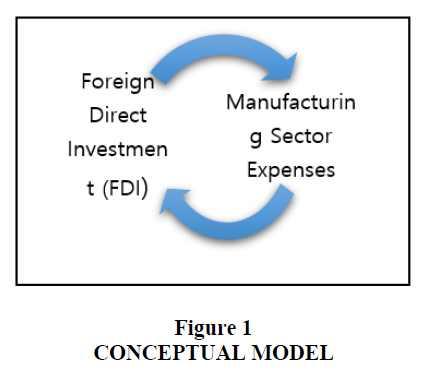 1. To find out the association between FDI and manufacturing sector in India.

2. To find out the long run and short run influence of FDI on manufacturing sector in India.

3. To find out granger causality between FDI and manufacturing sector in India.

Auto Regressive Distributed Lag (ARDL) modelling approach has been considered to analyse the data set. The effectiveness of ARDL is that it can be applied to all the ranges of data integration say, whether it is I (0), or I(1) or I(2), the method is applicable to all the integrated order of the data. The long run cointegration is proved at the first level. Augmented Dicky Fuller (ADF) and Phillips Perron (PP) test are applied for testing the stationarity. After performing the cointegration, the short run and long run influence are checked through Error Correction Model (ECM). The long run direction of causality is also found at this stage. Finally, the short run direction of causality is found through the application of Granger Causality (GC) test.

H01: There is no long run co-integration among FDI and Manufacturing in India

H02: There is no long run significant impact of FDI on Manufacturing in India

H03: There is no short run significant impact of FDI on Manufacturing in India

H04: FDI does not granger cause Manufacturing in short run in India

H05: Manufacturing does not granger cause FDI in short run in India

Tables 1 and 2 explain the results of ADF and PP tests. It shows both FDI and manufacturing sector data are integrated of I (1).

Table 3 shows the result of cointegration. The value is 4.1 which is more than the I (1) value at 10 percent. It proves the existence of long run association among the variables. Hence, we reject H01 and conclude that there exists a long run relationship between manufacturing sector and FDI inflow in India.

The Error Correction Model (ECM) is formed to analyze the short run causality among the datasets. The short run impacts as well as the long run direction of causality are also ensured through this model. The result of ECM is presented below in Table 4.

Table 4 analyses the short run influences of FDI on manufacturing sector. The result proves that there exists a positive impact of FDI on manufacturing sector in India. Higher the inflow of FDI, higher will be manufacturing sector output. It leads to reject H03 and assures a significant short run influence of FDI. The error correction term is negative and significant. It assures that any short run shocks will be overcome by Indian economy with possibility of thirty seven percent. Hence, the long run causality running from FDI to manufacturing sector has also been established by this percentage. This also leads to rejection of H02. The normality of the data is proved by Jarque-Bera statistics (0.45) with probability 0.8.The R square and the adjusted R square of the model are satisfactory to conclude the required goodness of fit of the model. The result of Breusch-Godfrey Serial Correlation LM Test (4.92 with probability 0.03) signifies that the data are serially correlated. The Breusch-Pagan-Godfrey Heteroskedasticity Test (3.60 with probability 0.03) explains that the data are not homoscedastic in nature. The Durbin- Watson statistic is 2.17 here, which proves that the model performs reasonably to explain the actual phenomena.

Table 5 analyses the result of granger causality. It signifies that there does not exist any short run directional causality between these variables. This leads to acceptance of both H04 and H04. Finally, the stability of the model is judged through Cumulative Sum (CUSUM) and Cumulative Sum of Square (CUSUMQ) test. The result proved that the model is stable. The results of CUSUM and CUSUMQ are presented in Figure 2 and Figure 3. 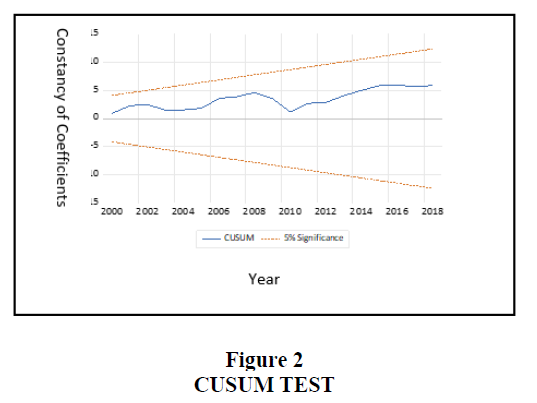 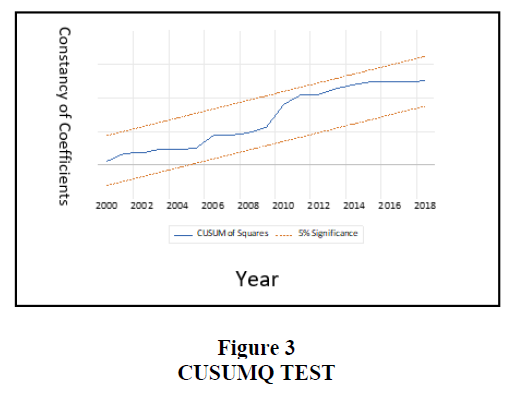 The study explains the relationship between FDI and manufacturing sector in India. It shows a cointegration between the two variables. It proves the long run association between these two variables in India. The impact of FDI on manufacturing sector has also been found to be significant. This means, if inflow of FDI occurs to India, there will be growth in manufacturing sector in India leading to overall economic growth. The result also proves the long run direction of causality from FDI to manufacturing sector as there exists a significant error correction term in it. The possibility of short run correction from shocks and the movement to long run stability is thirty seven percent. The R square and the adjusted R square values are sixty-five and fifty two percent which proves that the model performs satisfactorily to explain the actual scenario. The Jarque-Bera statistics explains that the data in the model are normally distributed proving that the FDI in manufacturing sector is indispensable. India, which specifically focuses on service sector, needs to put in much effort to encourage the manufacturing sector to notice a commendable growth in its development process. The current need is to divert FDI to the manufacturing clusters namely Maharashtra, TamilNadu, Gujarat, AP, Telangana, Karnataka and Uttar Pradesh through “Make in India” move.