For many people, managing their careers has become increasingly difficult. Due to massive corporate downsizing, frequent career changes and increased cultural and demographic diversity in recent years, there has been a shift away from long-term relational contracts in favour of shorter-term transactional alternatives (Albert, Ashforth & Dutton, 2000). Career research uses broadly theoretical lenses to examine how individuals cope with these changing environments and manage their careers.

OID research provides one such theoretical explanation vis-à-vis organizational careers and boundary-less careers. OID research examines “a psychological bond” (Riketta & Van Dick, 2005) between an individual’s identity and organizational identity. This is important in order to understand why some people remain employed by the same organization.

In response to the dynamics of individual career paths, career research suggests that careers without boundaries are an important conception (Authur, 1994). In the same way, OID research has also explored the separation between individuals’ identities and organizational identities. In the context of boundary-less careers it is important to understand and explain why some people want to leave particular organizations and change careers.

The Essence of Organizational Identification

OID research was re-conceptualized by Ashforth & Mael (1989) who applied social identity theory (SIT) in an organizational context. OID is “the degree to which a member defines him or herself by the same attributes that he or she believes define the organization” according to a well-known definition by Dutton, Dukerich & Harquail (1994). First, how do you explain people’s identification processes and preferences using SIT?

SIT is based on the assumption that people are motivated toward self-enhancement. The self-enhancement motive means that people are motivated to enhance self-esteem (Hogg & Abrams, 1988). People discriminate on the basis of in-group versus out-group by social categorization and social comparison to enhance their self-esteem and thus people can identify groups or categories pursuant of that objective (Tajfel & Turner, 1986). Social categorization means that people categorize themselves in a specific social group or social category. For example, “I am a student at Kobe University.” Whereas social comparison means that people evaluate social groups or social categories which they join as higher than those which they do not join (Hogg & Abrams, 1988). For example, “I am proud to be a student at Kobe University; I hold it in higher regard than Tokyo University.”

The Problem of Organizational Identification

However, some research has criticized the overly deterministic accounts of people’s engagement processes. Alvesson & Sandberg (2011) pointed out two tenets of OID research, which can serve to create problems. One is that “individuals and organizations are constituted by a set of inherent and more or less stable attributes.” The other is, “the attributes of the individual are comparable with the attributes of the organization through a member’s cognitive connection” (p. 261).

Bergami & Bagozzi (2000)’s OID scale is a good example by which to illuminate the problems with these tenets. They proposed a new scale of OID that measures the extent of an individual’s OID in order to quantify how individual identity on the one hand and OID on the other, manifest themselves differently in people. As such, they view OID as an objective entity. In other words, OID is out there. This understanding has led OID research to consider the individuals’ distances’ from OID. Moreover, previous OID research has framed the OID process in terms of how to reduce this distance so that individuals converge upon OID (Figure 1). 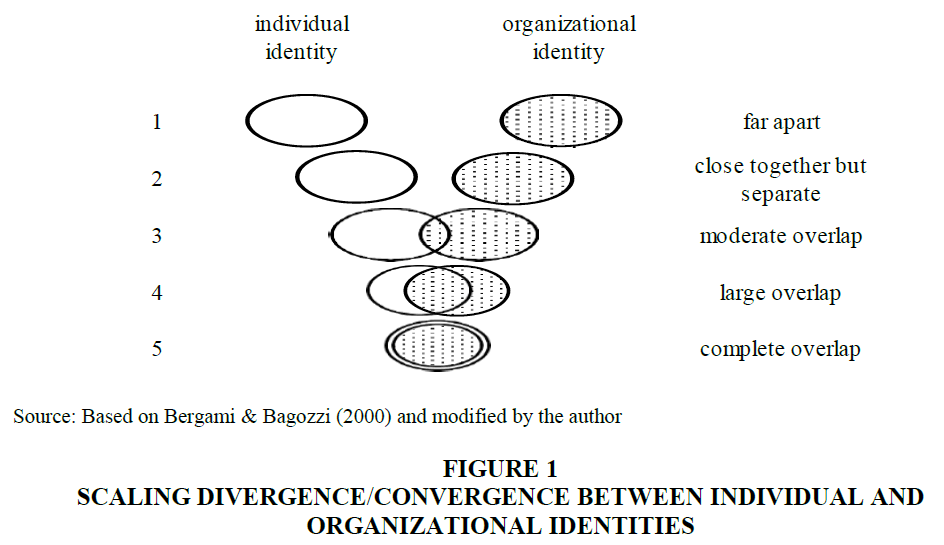 Here, the taken-for-granted assumption is that individuals are recipients of OID. In other words, they accord with the socially deterministic view of people’s engagement processes (Koerner, 2014).

Moreover, some authors have called for more attention to people’s engagement processes in the context of OID research. Ashforth (2001) noted that there is a dearth of research,” which aims to explore “how individuals struggle to create coherent and more or less stable definitions of themselves” (p. 10). Similarly, Kreiner, Hollensbe & Sheep (2006) pointed out a theoretical gap in terms of “understanding of the process of identity negotiation how identification waxes and wanes as individuals and their contexts evolve” (p. 1032). 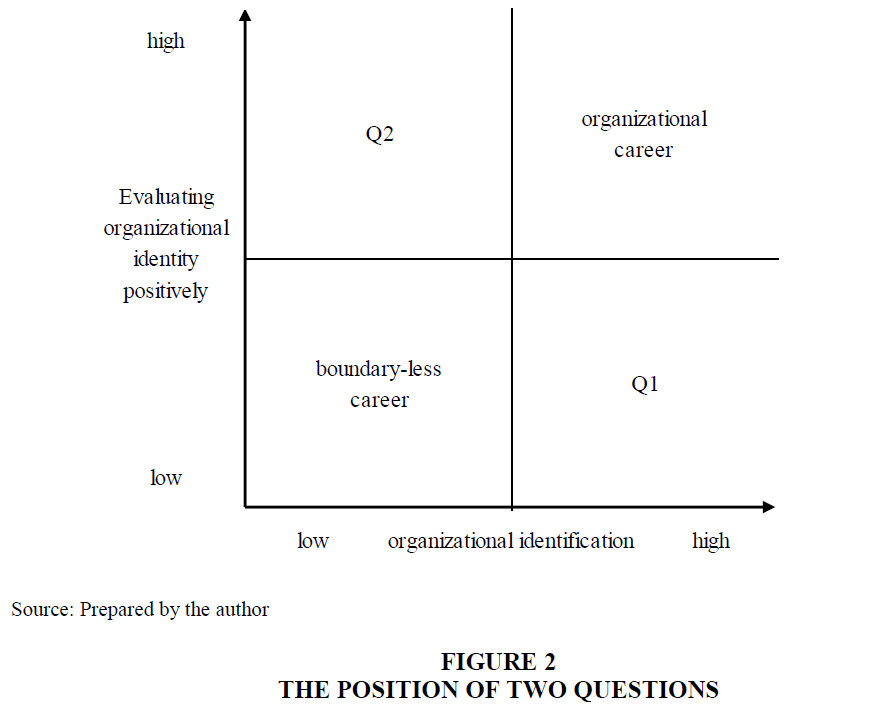 Figure 2:The Position Of Two Questions.

This study concludes that it is important to focus on these situations. Because we could get and deliver some knowledge of practices how to manage people’s own or their career. For individuals, to explore these situations means improving their engagement, whereas for organizations, it means finding out problems in and around the organization. Next, I will discuss the new framework; identity work.

The Essence of Identity Work

It is important to note two points to understand this framework. First, the word “work” is not a noun but a verb. For example, in suspense a drama people usually say, “It seems to work by an invisible force.” Second, consequently, we identify per se what is being worked. Changing the words to “invisible force works on us” enhances the understanding (Figure 3).

In particular, this framework is useful when there is a large gap between working on social identity and individual identity. For example, there is a gap between the ideal occupational identity as a doctor and what medical residents actually do (Pratt, Rockmann & Kaufmann, 2006) or between the assimilation demanded of a priest which may conflict with the individual’s desire to maintain distinctiveness (Kreiner, Hollensbe & Sheep, 2006).

Elsbach (2009) investigates toy car designers who sense a gap between the demand for making ordinary toys and the desire to think, “I am creative.” In other words, she focused on the point when toy car designers’ identity works on them and how they engage to maintain, revise or form the individual identity of “I am creative.” She shows that toy car designers develop and express “signature styles” and these styles allow them to affirm their creative and professional identities while making ordinary toys. Here the signature styles are not advertised, stamped on products or even recognized in official corporate marketing communications; however, the designers know they exist.

Identity work research can overcome the socially deterministic view of people’s engagement processes. If social identity works on people’s individual identities, people’s responses or acts are not unilateral or unidirectional. For example, Kreiner et al. (2006) investigate how Episcopal priests conduct identity work to negotiate an optimal balance between personal and social identities. They examine identity demands, which denote the situational and vocational demands placed on those in challenging occupations. Social identity, as a calling, means that a vocation is a calling, not just a job or traditional occupation. Identity expectations, functional or ontological, denote what should be done or said or what his or her identity or image should be. A strong situation means specific contexts invoke or cue the identity demands. However, they also explore how Episcopal priests ameliorate these demands by several identity work tactics. They present three examples of these tactics. Differentiating tactics means that Episcopal priests consciously separate personal identity from social identity. Integration tactics means that they blend their personal identities with the occupation and/or organizational identity. Finally, neutral or dual-function tactics denotes that they could pursue either differentiating and integration tactics.

Thus, it can be concluded that identity work is a useful framework to enhance research into OID processes because it offers two mechanisms for overcoming problems with OID research. First, this framework converges on individuals’ engagement processes by showing when organizational identity works on them. Second, this framework allows individuals and organizations to have fluid and dynamic attributes rather than rigid and static alternatives, which lack empirical support.

However, identity work research is not without problems. It is thus far unclear how to deal with complicated or multiple competing social identities, which create impediments to individuals pursuing identity work. Consequently, the previous research has tended to assume that every individual is able to do identity work when sensing such a gap. Indeed, Brown (2015) argues, “there is much we still do not know about how contexts affect individuals’ identities and identity work” (p. 31).

This section suggests future research directions based on the two short cases. These cases show people’s engagement process that they proactively (re)create or maintain individual identity. Previous OID research have focused individuals in a somewhat reactive role or viewed them as socially deterministic, responding to negative or positive image of organizational identity. OID research, however, missed this engagement process. Thus, it is useful to introduce the new framework; identity work.

However, Ashforth & Kreiner (1999) also pointed that individuals engaging in dirty work tend to retain relatively high occupational identification and Ashforth et al. (2007) examined the practices that they actively counter tainted identities or rendered them less salient. This study’s discussion is based on these researches and expands the situation of organizational corruption. Here, I pick up on the case of Petriglieri (2015).

In this respect, Petriglieri (2015) rationalizes that this “perhaps reflects the human tendency to attend to bad rather than good situations” (p. 548). On that basis, Petriglieri (2015) suggests that it is important to engage with identity reassessment in future research.

Investigating whether identity destabilization can also arise from events that appear beneficial, such as rapid organizational growth or unexpected success, would be a helpful extension in this area. Rapid growth, for example, might challenge an organization’s ability to retain its identity attributes because of an influx of new recruits, which could destabilize the identification of previous members. This problem has been suggested in anecdotes about fast-growing technology companies such as Google. (Petriglieri, 2015).

However, the positive image no longer corresponded to Spaghetti Organization. Over time, changes in internal policies and practices brought members’ daily experiences to become gradually detached from the ‘old’ policy of Spaghetti Organization. So, members seemed to perceive a new discrepancy between old organizational identity and their organizational reality. This discrepancy resulted in widely perceived ambiguity about Oticon’s organizational identity and members’ OID. However, to borrow Kjaergaard et al. (2011) words, ‘the members reported their increasing frustration at the reluctance of managers in choosing between a celebrated past identity that they were not inclined to implement any more and a yet-to-be-defined new identity that they were unwilling to articulate’ (p. 535). Kjaergaard et al. (2011) called this condition as ‘identity captivation’ which means that ‘they perceived as no longer being truthful, but which still ensured them considerable social recognition’ (p. 535).

Understanding when and why individuals find it difficult to do identity work is particularly meaningful in the context of studying modern contemporary careers. Where tainted organizational or social identities manifest themselves, we get and deliver knowledge on how we could be “proactive in shaping and crafting their identities to carve out a life worth living” (Kreiner & Sheep, 2009). Identity work tactics are examples of proactive work behaviors that lead to thriving at work. Thus, this is a highly proactive and intentional approach to positive identity development. (Kreiner & Sheep, 2009).

The purpose of this article was to review theoretically and critically extant OID research concomitant with introducing and positioning the concept of identity work in order to overcome problems with OID. In conclusion, this review puts forward three theoretical implications.

Third, we discuss significance of the people’s career who were not well-know. This research generally supports the argument that “we are making about the need to take nuances, complexities and ambiguities seriously. The identity aspect here became quite complicated. (Alvesson & Robertson, 2016).

Finally, this theoretical review also provides practical implications. Through these discussions, we could call for an examination of what resources are deliverable by organizations for individuals’ identity work in a given context. It is important to understand the situations of individuals who are finding it difficult to manage their own career and for organizations who are struggling to provide appropriate support for individuals’ careers in dynamically uncertain environments.

Callea, A., Urbini, F. & Chirumbolo, A. (2016). The mediating role of organizational identification in the relationship between qualitative job insecurity, OCB and job performance. Journal of Management Development, 35(6), 735-746.

Pratt, M.G. (1998). To be or not to be: Central questions in organizational identification. In D.A. Whetten & P.C. Godfrey (Eds.), Identity in Organizations: Building Theory through Conversations (pp. 171-207). Thousand Oaks: SAGE.

Riketta, M. & Van Dick, R. (2005). Foci of attachment in organizations: A meta-analytic comparison of the strength and correlates of workgroup versus organizational identification and commitment. Journal of Vocational Behavior, 67(3), 490-510.