The purpose of this study is to examine the impact of GDP per hour worked, total hours worked and labor force on GDP growth in advanced countries. The broad objective of the paper is to find out the relationship among variables. Gross Domestic Product (GDP) growth rate has been selected as dependent variable and GDP per hour worked, total hours worked and labor force is independent variables. We have collected our data for the period of 1870-2006. We used EViews 9 for data analysis. Different statistical tests were performed to fulfill the objectives of the paper. We used Augmented Dickey Fuller Test for testing unit root. For testing cointegration Johansen Test for Co-Integration has been used. We also used Error Correction Model (ECM), QUSUM and QUSUM square test for testing stability of the model. Paper shows that there has relationship between variables. GDP hour worked total hours worked are negatively correlated with GDP growth rate. Labor force is positively correlated with GDP growth rate.

The information based economy was discovered most prevalent example of economic development, trailed by the trade based economy. Neither the reserve funds based nor the ethnic religiously influenced example was discovered huge in influencing financial development founded by Kim (2014). His study also revealed that the trade based and knowledge based economy has positive significance on economic development. Lin & Rosenblatt (2012) showed that for global economic development not only developing countries are playing significant role, but also middle income countries also playing crucial role for overall development. It’s very important role for developing countries that they are contributing advance knowledge for practical and academic. Winters et al. (2008) tried to examine pattern of rural development for 15 developing countries. Their analysis shows that there is a strong positive significant relation between share of income and per capita income in rural non-agriculture activities. Their study also examined that the relation between agriculture production and per capita income is negative. Chen et al. (2014) examined the impact of urbanization of economic growth. They have selected 30 years panel data for finding out their study goal. Last there decade the level of urbanization have been changed dramatically. They have found that there is no significant correlation between the speed of urbanization and the growth of economic development at global level. Kim (2017) tried to examine the pattern of world economic development with consider of quality of life. Study reveals that there have several pattern of economic growth: trade based, knowledge based and savings based. Out of different types of economic growth, the most predominant pattern is knowledge- based economy. Fritz & Koch (2016) found that social connection can be set up under various institutional and economic conditions. Higher economic developments provide individual social prosperity, but it is matter of sad it can be destroy our environment for huge carbon emotion. Zahonogo (2017) tried to find out in developing countries how economic growth is affected by globalization by considering the period 1980-2012 in Sub-Saharan African (SSA) 42 counties. For SSA counties the relationship between economic growth and globalization is not linear.

This paper is based on secondary data. For collecting data we have used different types of sources like, the World Bank development Indicator, International Monetary Fund report and different journals. For collecting data we have consider period of 1870-2006. For analysis all those data EViews 9 software used. For conducting the study we used different types of statistical tools. Firstly we tried to show stationary of data by following Unit root test (Augmented Dikky Fuller Test). For testing cointegration Johansen Test for Co-Integration has been used. It also used Error Correction Model (ECM) test, QUSUM test and QUSUM square test. Here QUSUM test and QUSUM square test has been used for checking stability of the model.

From Augmented Dickey Fuller (ADF) unit root test (Table 1), it can be said that all these variables are stationary at 1st difference. By testing Johansen Test (Table 2) for Conintegrating it has been estimated that at least there has 1 co integrating equation in this model, Trace statistic and Max-Eigen Statistics also support this co-integrating equation Zahonogo (2017).

From Table 4, it is very clear that the relationship among all those variables were stable during 1870-2006. From R-squared value it is worth of saying that the data sets is relatively good for this work. Here GDP growth rate can be explained properly because F-Statistic is robust enough at 5% significant level.

Figures 1 and 2 showing QUSUM and QUSUM square statistics. Basically graph showing that most of the time green line is within red line so we can say that our model is stable Kim (2017). After lots of analysis and study, paper shows that for advanced countries (1870- 2006) the pattern of economic growth is really amazing. Our study found that GDP affected by GDPPH, total hours worked and total labor force. There have strong relationship between all those variables. The findings of analysis show that the relationship between GDP growth and labor force is positive. But GDP per hour worked and total hours worked are negatively correlated with GDP growth. Our QUSUM and QUSUM square test suggest that out model is stable over the year 1870-2006. 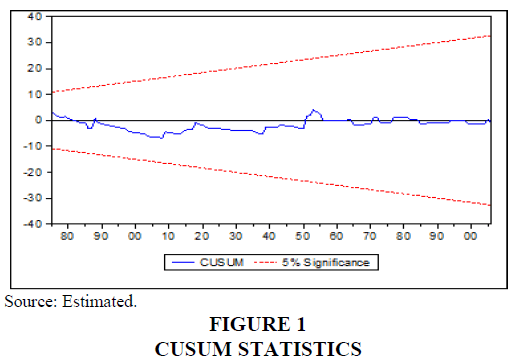 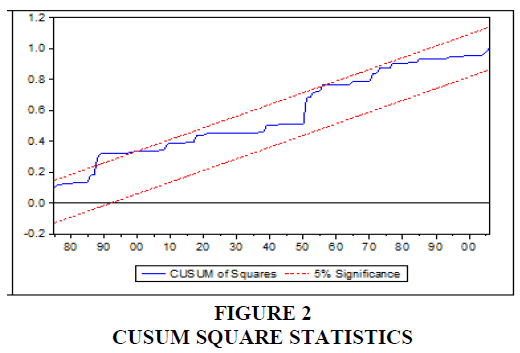