Do Competitive Strategies Moderate the Relationship between Learning Organization and Performance of Higher Education Institutions?

Modern Higher Education Institutions (HEIs) are moving from being merely public service organizations to market-driven organizations; hence, they are confronted with the need to reform many of the management practices. One of the most significant of the current issues faced by HEIs is improving performance. However, improving performance of organizations, especially the HEIs, requires various characteristics that would lead to the achievement of the goals and objectives of the management. Therefore, HEIs must adopt promising managerial approaches and practices to improve their performance, including becoming learning organizations (Watkins, 2005); competitive strategies (Mathooko & Ogutu, 2014).

HEIs have increasingly begun to look at interventions of organizational learning as significant ways to understand how knowledge is employed and exploited (Jane et al., 2018). There are as several definitions as there are different approaches and models for defining and conceptualizing the learning organization (Örtenblad, 2018). A learning organization maximizes the capabilities of individuals in the organization to bring about change, to survive in a volatile environment, to sustain competitive advantage and to boost the organization's overall performance. Like other organizations, HEIs should develop and adapt new strategies to respond to the rapid changes in the regulatory environment where they operate and to sustain competitive advantage. Individuals in a learning organization will compete with their counterparts and always endeavor to excel. On the other side, suitable competitive strategies can also enable organizations to best exploit their own core competencies to capture opportunities in their external environment (Porter, 1985). Competitive strategies can facilitate HEIs to perform better to attain a successful and sustainable position, to confront the forces that determine market competition (Mathooko & Ogutu, 2014).

Improving the performance of HEIs is a common concern in different countries around the world. Yemen is one of those countries in which its HEIs are operating in a volatile environment. This requires the HEIs to adopt new strategies to strongly curb the challenges, adopt new ways to survive and cope with changes imposed by the environment. This is because currently, HEIs in Yemen are operating in a highly dynamic and complex environment due to the presence of many executors in the higher education sector (Supreme Council for Educational Planning, 2014). Hence, their strategies need to be realigned and focused on the needs of their clients, such as the community, the government and the students at large.

As with any HEI in the developing countries, Yemeni HEIs face many obstacles in a volatile environment; they suffer many shortcomings that prevent them from attaining higher levels of performance and productivity. In this regard, Al-haimi et al. (2018) pointed out that Yemeni HEIs face several issues that affect their institutional performance in a competitive environment, similar to institutions in the same region or the rest of the world, which have led to fail to be listed among World Class Universities. For instance, HEIs in Yemen suffer from weak educational processes and a decline in institutional performance (Supreme Council for Educational Planning, 2014; World Bank, 2010). Therefore, solutions must be sought for all these challenges and issues experienced by this sector, which stimulate to conduct this study.

Evidence from prior studies has indicated that the learning organization is an essential determinant to improve organizational performance (Marsick & Watkins, 2003) and is useful for creating competitive advantage. On this note, strategy adoption might enhance or obstruct the good practices of the learning organization in the relationship with organizational performance. Based on the Resource-Based View (RBV), the resources and capabilities owned by organization are critical determinants to enhance the performance of the organization, which in turn, contribute to the achievement of sustainable competitive advantage (Wernerfelt, 1984). Related literature deem the processes of learning within organizations as a fundamental strategic capability for organizations to outperform their rivals (Goh, 1998). This leads to the following hypothesis:

H1: There is a significantly positive effect of the learning organization on performance of HEIs.

Figure 1.The Framework Of Study.

H2: Cost-leadership strategy moderates the relationship of the learning organization with performance HEIs.

H3: Differentiation strategy moderates the relationship of the learning organization with performance HEIs.

H4: Focus strategy moderates the relationship of the learning organization with performance HEIs.

The research employed a cross-sectional research design where the population of the study is all institutions in the public and private sectors which are classified as HEIs in Yemen. The study used the census approach to collect data from the entire population rather than sampling, to avoid any sampling bias and error because the size of the total targeted population is small and manageable (Zikmund et al., 2010). The questionnaire was distributed to deans, deputy deans or their representatives. In total, 189 out of 292 questionnaires were returned. But according to the suggestion of Hair et al. (2010), three questionnaires were not utilized as more than 50% of the questionnaire was incomplete. Through an appropriate data screening process, two questionnaires were deleted because extreme outliers. In total, the number of valid questionnaires for the further analysis was 184, specifying an effective response rate of 63 percent.

Organizational performance was measured using 22 questions adapted from previous studies and by following Chen et al. (2009) and Hussein et al. (2016). Learning organization has 21 questions adapted from DLOQ of Marsick & Watkins (2003) and Watkins & Marsick (1997). Competitive strategies were measured using 12 questions adapted from previous studies and based on the measurements of Dess & Davis (1984) and Luo & Zhao (2004). All items of organizational performance and learning organization were evaluated by a five-point Likert scale, ranging from 1 to 5 (strongly disagree, disagree, neutral, agree, and strongly agree), while the items of competitive strategies were evaluated on a five-point scale, ranging from 1 to 5 (very low, low, average, high, and very high).

The majority of the participants are deans of colleges (57.5%), followed by deputy deans (39.3%), while other positions constituted 3.2%. Descriptive statistics also show that the majority of the respondents are between 40 to 49 years old (64.5%), followed by 50 years old and above (18.3%), while the lowest percentage is those less than 30 years old (0.5%). These results show the importance of work experience to have a top management position in Yemeni HEIs.

Before proceeding to assessment of measurement and structural model, it is essential to ensure that the collected data are suitable for conducting the analysis using PLS-SEM. The correlation matrix was employed to detect the presence of multicollinearity or not. Additionally, tolerance and Variance Inflation Factor (VIF) were also assessed to identify multicollinearity issue. According to Hair et al. (2017), tolerance value should be higher than 0.20, while VIF value should be lower than 5. Table 1 shows Pearson correlation matrix and the collinearity statistical results, the correlations values ranged between 0.412 and, 0.775, while the tolerance and VIF values for the independent variables are within the acceptable limit. Therefore, the results signify no violation of the multicollinearity issue.

For evaluating the reflective measurement model, the authors followed the recommendations of Hair et al. (2017). The internal consistency reliability and convergent validity were evaluated by examining the following: firstly, all indicator loadings must be 0.70 (Table 2 and Figure 2); secondly, the Composite Reliability (CR) of latent constructs and Cronbach’s alpha coefficient must be more than 0.70; and thirdly, the Average Variance Extracted (AVE) of latent constructs must be higher than 0.50, as illustrated in Table 2.

For assessing the discriminant validity, there are several methods to do this, such as using the Heterotrait-Monotrait (HTMT) ratio criterion and cross loading matrix. Table 3 shows the results obtained from the HTMT criterion; according to this criterion, all constructs have acceptable discriminant validity because all values of the constructs are less than the cut-off of 0.85 (Kline, 2011). Further, the indicator loadings of constructs are larger than the cross-loadings on the their other latent constructs (Hair et al., 2017). Thus, this confirms that discriminant validity is sufficiently established. Then, the measurement of the model was established. Figure 2 fshows the reliable and valid measurement. 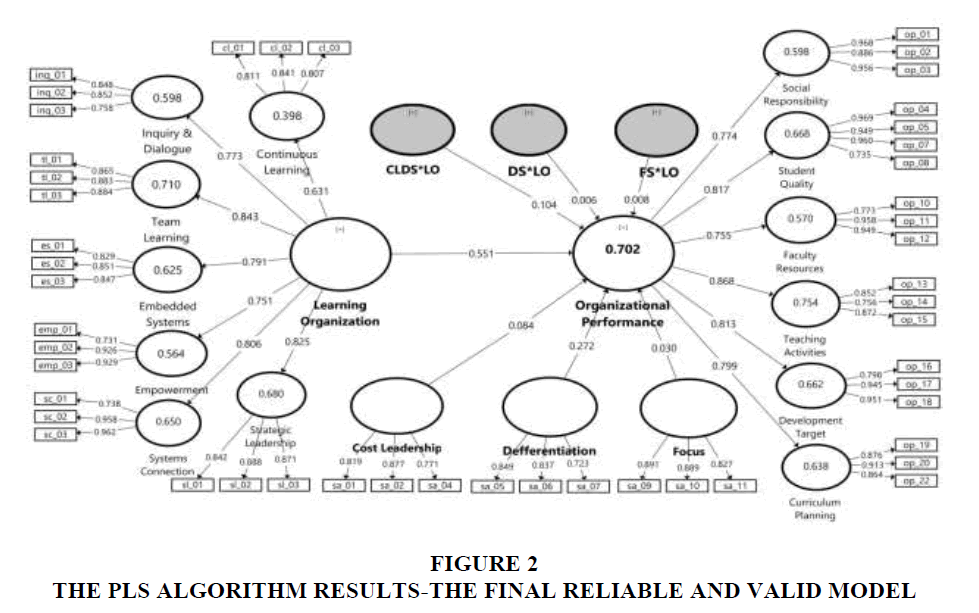 Assessment of the Structural Model

For assessing the structural model, the authors followed the suggestions of Hair et al. (2017) by including the coefficient of determination (R2) value, effect size (f2) values, predictive relevance of the model (Q2) and path coefficient. The value of R2² indicates the measuring of the predictive accuracy of the model. R2 with 0.75, 0.50 and 0.25 is deemed as the rule of thumb for endogenous latent variables, which is described as substantial level, moderate level or weak level of predictive power, respectively (Hair et al., 2017). Effect size was also evaluated to determine the size of effect of each construct on the endogenous construct. According to the suggestions of Cohen (1988), the f² value of 0.02 is considered as small effect size, 0.15 as medium effect size and 0.35 as large effect size.

Furthermore, as recommended by Hair et al. (2017), the model will have predictive relevance when the cross-redundancy (Q2) values are found to be higher than zero. In this study, the result shows that the Q2 for organizational performance is 0.329, which means that this model has a sufficient predictive relevance.

The last step in assessing the model was to examine the proposed relationships by using bootstrapping resampling estimation procedure. As shown in Table 5, H1 is supported (p<0.01), which means that there is a significantly positive effect of the learning organization on performance of HEIs. In addition, H2 regarding the moderating effect of cost-leadership strategy on the relationship of learning organization with performance of HEIs is supported (p<0.05), this means that cost leadership strategy has a moderating effect in strengthening the relationship of learning organization with performance of HEIs. Table 5 also shows that differentiation strategy and focus strategy have no moderating effect on this proposed relationship; therefore, H3 and H4 are not supported (p>0.05).

On the contrary, the differentiation strategy and focus strategy do not have a significant role in strengthening this correlation. As results, the non-significant findings of the differentiation strategy may be attributed to the fact that Arab HEIs including Yemen, do not employ modern technological methods that can distinguish their educational programs and services, and they do not have enough budget for research and scientific innovation (Muqdadi et al., 2012). Focus strategy also shows an insignificant result as a moderator. This may be due to the fact that the majority of educational institutions seek to target a large segment of students, customers and a large sector of the market and not focus on specific sectors of the market.

This study has some implications for the HEI’s top management, deans, departments’ heads, academics and other staff, in terms of the importance of promoting the principles of learning to reinforce higher performance and to attain competitive advantage.

The research recommends that there is a critical need to inculcate the learning organization practices and strategy adoption concepts among staff and academics for enhancing their inputs to organizational performance individually and collectively. The research also highly suggests that it is necessary to mobilize resources and make efforts to instill learning and strategic thinking not only among top management but also among staff and academics within the institution.

The modest contributions of this research are of varied importance. Firstly, since this domain of research is considered as new in the HEI context, it is a critical to bridge the gaps on the topic, especially in the Middle East. Secondly, from a theoretical perspective, this research has a unique model and contains a set of variables, which supports and expands the literature review in managerial development and strategic management. More clearly, this research highlights vital and unprecedented insights on learning organization and competitive strategy as predictors of organizational outcomes, in terms of organizational performance, especially performance of HEIs. Theoretical insights that cost-leadership plays prominent role in moderating the link between learning organization and performance were confirmed empirically, underpinned by the RBV and dynamic capabilities theories to ensure exceptional performance. In addition, this study relies on data from the population as a whole by surveying all subjects in public and private institutions, which gives strength to the results and reduces bias and sampling errors (Zikmund et al., 2010).

Supreme Council for Educational Planning. (2014). Education indicators of the Republic of Yemen: Stages and various types for the year 2012\2013. Sana’a: Prime Ministry.

Watkins, K.E. (2005). What would be different if higher educational institutions were learning organizations? Advances in Developing Human Resources, 7(3), 414-421.