Does Labour Costs Matter for the Airline Industry?

The whole world has entered a new stage, and air travel will have the ability to deliver anyone to any corner of the globe in a matter of hours (IATA, 2014). In addition to the contribution to tourism and tourism, air transport represents an important industry. Hence, US airlines technical efficiency is a topic that worthy of attention.

Researcher Carlos et al. (2013) conducted a study by exploring the use of the B-convex model as a tool for assessing the technical efficiency of US airlines, by combining operational and financial data. Carlos et al. (2013) stated that since the terrorist attacks in September 11, 2001, the US airline industry has been in the financial crisis in the near future (Lai & Lu, 2005). The result shows a sharp decline in passenger demand, and the cost of a substantial increase. Some airlines merged with the name, such as the Eastern, TWA, Pan Am, Republic, Piedmont, Ozark and Texas Air disappeared from the market. After the September 11th terrorist attacks, one of the major difficulties that the airline industry faced came about, the problem that airlines industry faced after the attacks was government required them to pay the enormous costs for security precautions and this caused airline prices increase drastically (Kahn, 2004). Besides, Santosuosso (2014) said that “ROA is progressively less dependent on factors that could affect technical efficiency and increasingly influenced by many other firm and market variables.”

In addition, Return On Equity (ROE), as one the performance models, a strategic key performance indicator on demonstrating the level of airline technical efficiency. Moreover, on time consider as service quality of airline and a significant loyalty factor, according to Choi et al. (2015), integrates service quality would be critically important for various service industries, while we strengthen service quality, it leads to higher level of customer satisfaction, and therefore airlines perform better. Based on Tsionas et al. (2017) research, we can conclude that there is cause-effect relationship between technical efficiency and flight delays, higher technical efficiency levels are correlated with lower delays. Besides, customer are willing to pay a high amount to avoid the schedule delay (Zhang, 2012), which means customer regard this as important issue. In fact, this factor has a negative effect on customer complaints; it will affect airline’s reputation. Based on Tsionas et al. (2017), we can conclude that delays consider as an undesirable output within the ambit of airport operations.

Airlines reduce their labour cost to achieve competitive advantage over competitors, and also employees are willing to accept lower real wage. Meanwhile, airlines encourage employees to comply with cost-control strategies (Chang & Shao, 2011). Airlines might control employee working hours to lower the real wage of employee and avoid overtime pay. Consequently, the profit of airline industry will increase through reduction in labour cost. Major of literature reviews studied within this scope of area and industry applied exogenous variables as inputs including costs and expenditures, then result in term of performance and efficiency of airlines, as the endogenous variable. The paper written by Yayla-Kullu & Tansitpong (2013) studied about whether the labour expenses and operating expenses can be used as inputs to turn them into a good quality services, eventually boost up the airline technical efficiency.

By substituting the chosen variable into Cobb-Douglas production function as following:

Stochastic Frontier Analysis (SFA) is a parametric method of economic modeling. It was independently introduced by Aigner et al. (1977) and Meeusen & Van denk Broeck (1977) and this econometric theory is used to estimate pre-specified functional form and inefficiency is modeled as an additional stochastic term. The stochastic frontier method treats the deviation of the production function as both the random error (white noise) and the inefficiency (Mortimer & Peacock, 2002). This enables a distinction between a random symmetrical component which accounts for measurement errors and stochastic effects (e.g. due to weather influences) and a symmetric deviation component which represents the inefficiency. The SFA as a parametric approach requires assuming a specific function form a priori, the frontier is estimated econometrically by some variant of last squares or maximum likelihood (Coelli et al., 2005). SFA is based on econometric regression model, frontier is smooth, curved and appropriately.

The SFA is a model for generating technical efficiency scores and methodologies that seek sources of inefficiency. SFA determines the lowest cost incurred. In order to achieve the high operational efficiency of domestic airlines, airline managers must strive to reduce operating expenses (input) while increasing operating income (output). This can be achieved by implementing the SFA model for the efficiency estimation from those airlines’ performances in term of technical while analysts’ attempts are to achieve one of the concepts from SFA saying that producing the output at the optimal level with using the least amount of input.

Besides that, our study will provide method that contributes to the estimation which is the two-stage analysis which the first stage is to generate the technical efficiency score by inserting the input and output factors; while the second stage is to form the linear regression by serving the technical efficiency as the dependent variable, internal and macroeconomic factors as the independent variables that could explain the relationship among both sides of the variables. For second stage analysis, panel data (fixed and random effect model were employed) to test relationship between internal factors and technical efficiency of US airlines. The model as follows:

To interpret the technical efficiency, it refers how productive a business can be given by least amount of inputs or resources which is required to produce the product or to offer the service. It also can be defined as the effectiveness of input to produce output over the business. So, among these airlines, only Frontier Airlines, JetBlue Airlines and US Airway are determined at well level of technical efficiency and other airlines are with low technical efficiency especially in Southwest Airline. All the airlines dropped their efficiency scores in recent year between 2015 and 2016. It means that the input or resources to produce output, which is the flight services, were not at well optimization.

To conclude the above discussion, after conducting the SFA to determine the technical efficiency score, the results showed that, after the merger and consolidation of passengers, available seat miles and operating costs, the operating revenue has implied low efficiency across the subsequent years. However, in some years for the respective airlines (Frontier Airlines and JetBlue Airlines), the technical efficiency of the airline performance has reached at optimum score of 1.000 due to the adequacy of the inputs. The other airlines should improve the inadequacy in optimizing of those inputs to drive well of level of technical efficiency. 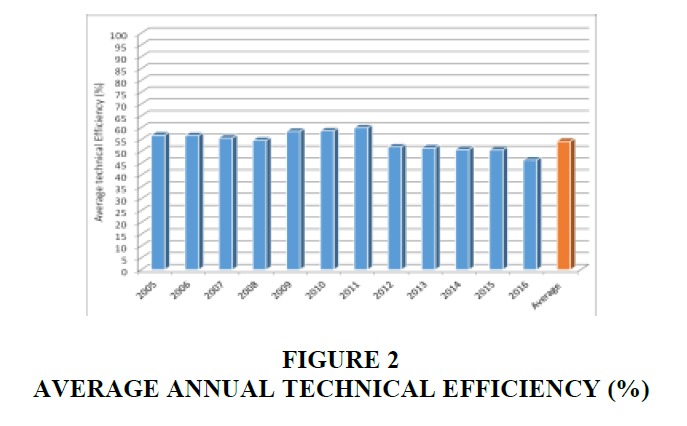 Notes: *, ** and *** implies that the rejection of the null hypothesis of non-stationary at 10%, 5% and 1% significance level respectively.

However, ROA show as weak significant to explain the technical efficiency at the 10% of significant value. For the other two variables, labor cost and return on equity show a strong significant in explaining the model at the 1% of significant value. Major of literature reviews apply exogenous variables as inputs including costs and expenditures, then result in term of performance and technical efficiency of airlines, as the endogenous variable. Most of airlines by carrying on with low cost carriers which consist of cost cutting from aspect of labour as well as airline operation tend to be efficient compare to others. It has been proven that by cutting off of labour cost could bring the airline a more efficient performance. ROA as a measure that provides superior annual stability as compared with other measures and identified ROA as particularly valuable in multiple industry studies.

In a nutshell, internal factors consist of on-time arrival, labour cost, Return On Equity (ROE) and Return On Assets (ROA), after conducted the Hausman test, we can conclude that both the on-time arrival and ROA have a positive relationship to the technical efficiency of the airline. On the other hand, labour cost and ROE are inclined to the opposite direction of movement to the technical efficiency.

For internal aspect, government should take actions to improve the airlines performance based on the significant criteria that we found in our study. First of all, government should regulate the schedule of airlines within the nation. Government should regulate both ways of route from the hub to the destination and back again. This policy is to isolate weather issues from certain geographical areas. For instance, by implementing this method, weather in Chicago will not affect the rest of routes. Thus, on-time arrival will be improved. On the other hand, government should regulate overbooking problem and protect the right of passengers. Legislators can also write a law to govern airlines that person who has purchased the ticket cannot be forced off due to overbooking issue. With this regulation, passengers are under law protection, thus services of airlines can be guaranteed to be consumed. Therefore, ROE and ROA of airline firm will increase; eventually enhance airlines’ technical efficiency.