Within the context of the research, loyalty is integrity strongly held to repeatedly purchase certain product in the future regardless conditional intervention and marketing department’s capability to convince behavioral change (Kotler & Keller, 2016). Loyalty is a positive posture or good sentiment given by customer to service provider (Zangmo et al., 2014). Loyalty cannot be forced but must be given voluntarily by customer. Repeated purchase and willingness to give recommendation to other individual are the reflection of loyalty (Gupta et al., 2018). Any companies find as important to the increase of customer loyalty because strong customer loyalty helps the companies to save corporate cost. It is said so because customer loyalty enables the companies to reduce marketing cost, to decrease transaction cost, to minimize customer turnover, to activate mouth-to-mouth promotion, to improve cross-selling to customer, and to cut down failure cost (Griffin, 2002). Student shows strong loyalty to a certain study program at higher education because student has intention since the beginning to select that study program, to recommend that study program, and to plan to continue the study at the postgraduate study program on the same department (Erdo?mu? & Ergun, 2016). In that case, loyalty is significantly affected by service quality and satisfaction. On service sector in Pakistan, loyalty is greatly affected by service quality with the mediation of satisfaction (Satti et al., 2020).

Satisfaction is a feeling of joy after comparing the performance of product that has been used with the expectation (Kotler & Keller, 2016). Satisfaction is one element used to interpret the retention level of the existing customer or the curiosity level of new customer. The relationship between desire, hope and necessity and also its fulfillment can be seen from the satisfaction in getting what is expected. Satisfaction can be defined as post-sale evaluation where the selected alternative will give same result or beyond expectation. Dissatisfaction emerges because there is difference between what has been gotten and what is expected. The tolerated difference between the service delivered and the expectation is called zone of tolerance (Nadiri, 2012). Previous researches mentioned that satisfaction affected loyalty. For instance, Zangmo et al. (2014) discovered that satisfaction affected the loyalty of customer of Drukair, Bhutan airline enterprise. It was Barusman & Riorini (2016) who said that customer satisfaction affected customer loyalty at Bank Mandiri. Moreover, Leninkumar (2017) revealed that customer satisfaction has positive effect on customer loyalty at commercial banks in North Srilanka Province. Fida et al. (2020) found that customer satisfaction has positive effect on customer loyalty at at Islamic Bank of Oman Sultanate. Regarding to the explanations above, the second hypothesis is written as following:

H4 Zone of tolerance mediates the effect of satisfaction on loyalty

H5 Zone of tolerance has positive effect on loyalty

By taking into consideration of several findings from previous researches, it can be said that loyalty is created through service quality, satisfaction and zone of tolerance. The relationship of each construct is shown in Figure 1.

Sample size is determined using the procedure provided in the scheme of Partial Least Square-Structural Equation Modeling (PLS-SEM). Sample size plays important role in predicting the result of research. The needed sample in PLS-SEM scheme is usually five times indicator minimally. In the current research, sample was selected randomly using a sampling technique called proportionate stratified random sampling. This research involved 34 indicators. Several students were selected from management study programs in five private universities, and the obtained number was 409 students. This number passed minimum limit of sample requirement. Data from each university were different one another because the percentage of students who actively attends the lecture at the management study program on each university was also different. The percentage was divided by total of active attendant students. The collected data are then processed and analyzed with an application program named WarpPLS.

Data analysis technique of the research is Partial Least Squares (PLS)-Structural Equation Modeling (SEM). The analysis technique is carried out with a computer application named WarpPLS 7.0. The current research is both predictive and explorative in nature. The use of PLS-SEM is decided based on two benefits. First benefit is that PLS-SEM can still work efficiently in small sample size and on complex model. Second benefit is that the assumed data distribution at PLS-SEM is relatively loose than other techniques such as CB (Covariance-based)-SEM. For testing Hypothesis 1 to 5, two equations are developed as following:

In regard of the contents of the Table 3 above, it is shown that research constructs are in very good category because the rule of thumb for <3.3 is fulfilled. In accordance with the situation, it can be said that research model is free from problems of vertical collinearity, lateral collinearity, and common method bias. 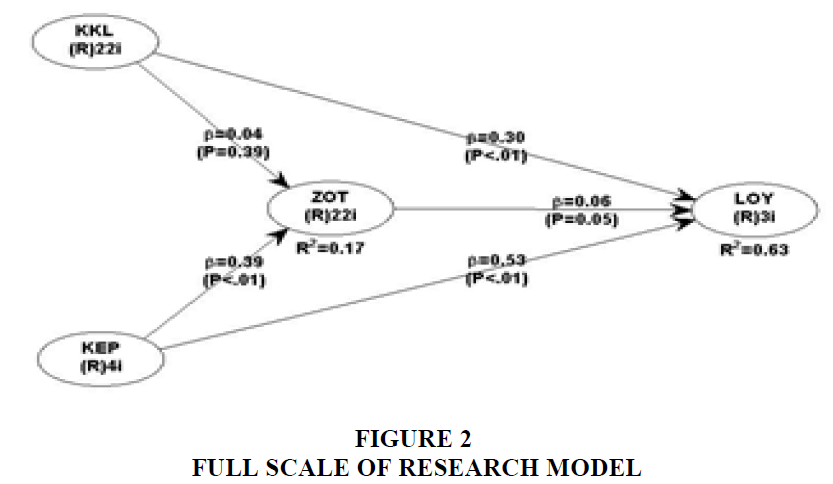 After conducting test on indirect effect relationship (mediation hypothesis) (Table 5) involving SQ→ZOT→LOY, the coefficient value of the indirect effect is 0.404 with p-value of 0.002 (p<10%). The result indicates that ZOT value significantly mediates to the effect of SQ on LOY. Direct effect relationship (direct path) involving SOQ→LOY was also tested and the obtained value was significant at level of <0.001. Other mediation path is SAT→ ZOT→ LOY. After testing the mediation hypothesis, it is found that the coefficient value is 0.390 with P-value <0.001. Regarding to all these results, it can be said that there is partial mediation where SAT affects LOY (loyalty) through ZOT (zone of tolerance) as mediation variable.

Hypothesis test (Table 6) was conducted on the first hypothesis stating that service quality has positive effect on loyalty. Result of the test shows that p-value of the hypothesis is <0.001. It means that the first hypothesis is accepted. Logically, if service quality is good, then customer will be loyal. In the context, customer loyalty is defined as the allegiance given by certain individual to certain product or service. According to Bell et al. (2005), service quality is determiner of customer loyalty. If customer loyalty is high, then corporate income is also high. Hypothesis test was also conducted on the second hypothesis stating that satisfaction has positive effect on loyalty. Result of the test indicates that the p-value of the hypothesis is <0.001, which confirms that the second hypothesis is accepted. If the position is understood with logic, it can be said that if customer feels highly satisfied, then customer will be loyal to the product or service offered. Hallowell (1996) and Bowen & Chen (2001) declared that the relationship between satisfaction and loyalty is the determinant of high profitability.

The aim of the current research is to examine and analyze the effect of service quality and satisfaction on loyalty with the mediation of zone of tolerance. Population of research includes all undergraduate students who actively attend the lecture at five management study programs on five private universities in Jakarta. These five universities are selected with two conditions. First condition is that management study programs in these universities have been given Accreditation A by the National Agency for the Accreditation of Higher Education (BAN-PT). Second condition is that the number of student enrolled in management study programs on these universities is relatively greater than the number of student on other equivalent higher educations in Jakarta. Direct effect and indirect effect have been tested. Result of direct effect test shows that service quality and satisfaction have significant effect on loyalty. Significance value of this effect relationship is <0.001. Result of indirect effect test gives several findings. The mediation of zone of tolerance in the effect of service quality on loyalty is rejected. If the attractiveness toward customer is low, then customer loyalty to any product or service offered is also low. The effect of satisfaction on loyalty is mediated partially by zone of tolerance. Furthermore, the effect of zone of tolerance on loyalty is also significant at level of 5 percents. By virtue of all these results, it can be said that research has been able to answer Hypotheses of 1, 2, 4 and 5. Therefore, the current research has been successful in reducing the gap of previous researches.

Leninkumar, V. (2017). The Relationship between Customer Satisfaction and Customer Trust on Customer Loyalty.

International Journal of Academic Research in Business and Social Sciences, 7(4), 450-465.

Narteh, B. (2015). Perceived service quality and satisfaction of self-service technology the case of automated teller machines. International Journal of Quality and Reliability Management, 32(4), 361-380.

Wu, L.W. (2011). Satisfaction, inertia, and customer loyalty in the varying levels of the zone of tolerance and alternative attractiveness. Journal of Services Marketing, 25(5), 310-322.