The article raises an important scientific point of increasing the efficiency of integration processes of international corporations based on the concepts of strategic management. There were identified main motives for corporate integration, were identified the barriers to synergistic effect, were proposed methodical approach to differentiation of corporate effects strategies in corporate integrations, which increases market and profit effects for merged corporations.

In the process of development and complication of the structure of international production mergers and acquisitions have become an integral component of corporate policy and a major factor in the development of productive forces. At the same time, it should be noted that the mechanisms of the effects of mergers and acquisitions on the state of corporate finances, as well as the factors that determine the effectiveness of integrations for corporations that are reorganized, have not been fully understood. Specifically, the conventional explanation for the fact that up to 40% of mergers and acquisitions in the world are financially unprofitable (do not give the initiator corporations an increase in cash flow and value) is a wrong estimate of the value of the corporation-target and poor financial structuring of the transaction itself.

Corporate integration issues and the use of mergers and acquisitions are being actively investigated (Gaughan, 2007; De Wit & Meyer, 2005). A number of scientists Gupta (2012); Makedon & Korneyev (2014); Vo et al. (2017) pay considerable attention to the search for the economic effect of mergers and acquisitions, while the issues of primary motivational factors, both external and internal, remain unaddressed (Drobyazko et al., 2019 a & b). The presence of these factors determines the relevance of scientific research in this sector of corporate management.

The purpose of the article is to determine the main factors that shape the performance indicators of mergers and acquisitions in the environment of international corporations. 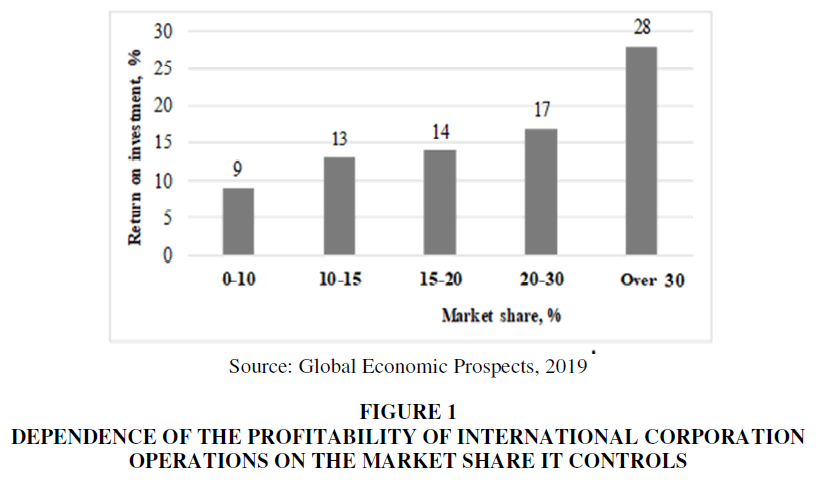 For small corporations, a very important factor is expanding their niches in the market, strengthening their competitive position and enhancing economic security on this basis. Naturally, in this case, such “classic” motives of mergers and acquisitions as the synergistic effect, the need for a complementary asset structure, and so on, are simply ignored and not calculated by the merging corporations. It is more important for them to eliminate a competitor, to gain an additional part of the market and to provide, thus, a competitive advantage (Boohene & Williams, 2012). As it is obvious that large corporations have significant competitive advantages compared to relatively small and poorly integrated industries.

It is easy for a large corporation to oust from the market a small corporation that produces products of the same type than the other way around, since a large company controls the proportional share of consumer demand for a given product, which significantly increases its financial sustainability. Even if a smaller competitor releases a more competitive product with better consumer properties, in most cases it will not undermine the competitive position of a larger corporation, which controls most of the demand in this commodity market, since a small corporation will not be able to quickly increase production to the required volumes (which is especially important in the low-resilience goods sector, which demand changes little with the change in prices) (Cunliffe, 2008). There are many examples of strategic acquisitions in the world that aim not at increasing efficiency but simply at expanding production, obtaining low-cost (but not always liquid and profitable) assets.

The competitive “monopolistic” factor of mergers and acquisitions is especially important when merging corporations with the same production structure that produce the same mass production (horizontal merger).

More than 50% of the mergers and acquisitions of corporations taking place in the world are determined by the motives of competition, and only 30% of the transactions are aimed at increasing the market value of the merged corporation, expanding the product range, creating a production chain and concentrating value added at finished product (Chakrabarti & Mitchell, 2004). Figure 2 shows the ratio of mergers and acquisitions to their real motives. 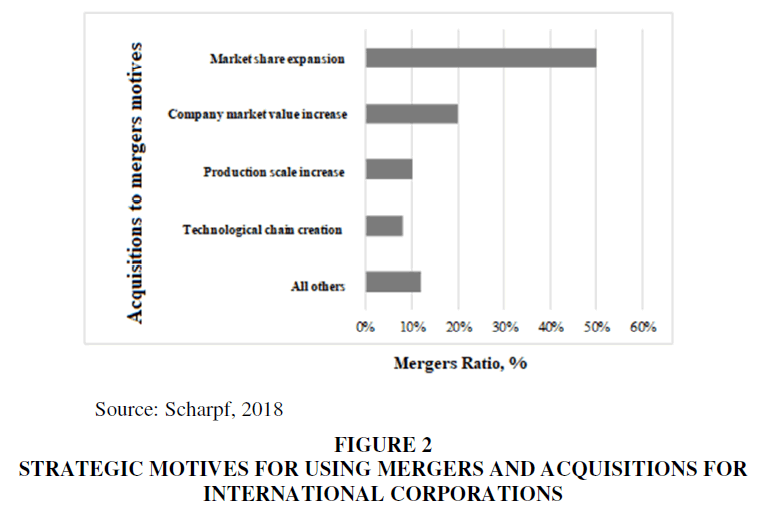 The statistics of the impact of mergers and acquisitions on production efficiency are dramatically exacerbated by those operations which do not have the immediate purpose of obtaining a synergistic effect (and, conversely, those operations which, initially, aim at improving efficiency are in most cases successful). This also explains the significant differences in the assessment of the effectiveness of mergers and acquisitions by different researchers reaching 35-40% (which can hardly be explained only by differences in methodologies and approaches).

Thus, it can be stated that not only the expected synergistic effect is the main motivating factor for integration operations. Too often, corporations try to increase the level of competitiveness of their products, increase market capitalization, or create an effective mechanism of production activity. It is proved that the accelerated growth of equity of a merged corporation in a merger is a further proof that the market value indicators are the most representative and accurate, at least, most accurately reflect all the variety and complexity of financial and economic processes of modern production.

Chakrabarti, A., & Mitchell, W. (2004). A corporate level perspective on acquisitions and integration. In Advances in mergers and acquisitions. Emerald Group Publishing Limited.

Drobyazko, S., Okulich-Kazarin, V., Rogovyi, A., & Marova, S. (2019b). Factors of influence on the sustainable development in the strategy management of corporations. Academy of Strategic Management Journal.

Gupta, P.K. (2012). Mergers and acquisitions (M&A): The strategic concepts for the nuptials of corporate sector. Innovative Journal of Business and Management, 1(04).