We analyzed the features of ethical issues in e-business. Having summarized consequences of the everywhere introduction of information-and-communication technologies in all spheres of economy, we justified the occurrence on the new type of the e-business. The e-business is characterized by the introduction of information-and-communication technologies in various types of business-processes. When forming a development strategy for e-business enterprises, you should take into account the following trends of business in the world network: E-ethics, e-safety, e-payments, logistics, forecasting of activities, big data analysis, and increase of effectiveness of labour, social component of the activities of e-business enterprises.

It is indisputable that humanity is in the midst of transformational changes driven by the high speed of technology development around the world. In this regard, scientists are introducing new concepts into the scientific circle that characterize the new type of society that arises as a result of these transformations. The concepts of the Post-Industrial Society, Information Society, the Knowledge Society, Net-Intellect Society, Global Society, Digital Society, and Silicon Society are often used to refer to the new type of society, but the first three names are the most popular in scientific papers on economics.

The American Marketing Association has recently added an internet usage code to the general code for marketing purposes. But ethical codes do not include norms of conduct regarding new phenomena of life and professional activity. Therefore, professionals should use ethical beliefs to analyze new problems and make ethical decisions. In addition, in today's market conditions, success requires strong and long-term relationships with clients and partners, and ethically balanced solutions contribute to this, and therefore they are the most appropriate for a successful business.

The information society and e-business are the result of human interaction and information-and-communication technologies. This symbiosis became possible due to the new scientific approach, which progresses on the information foundation created by the industry of supercomputers-the electronic theory of scientific knowledge (Yanina & Andriy, 2016). The latter, who is based on the triad "Experiment-Theory-Computing," positions itself as a hyper-science. Computing means the boundless "rhizome" of cognitive practices, the subjects of which use the digital equipment technology park for the purpose of computer assembling, systematization, processing, storing and broadcasting socially relevant information (Benitez et al., 2018). Before the invention of computers, the scientific knowledge and human functioning in the environment was based on an analogue cestus (sensory organs), which helped it to orient itself in the outside world and study it by taste, touch, sound, etc. (Gregory et al., 2017).

When developing the model of e-business enterprises, the method of modeling has been applied. The basics of forecasting the prospects of e-business development have been defined using the approach of self-organized criticality.

The use of Big Data in the economy is carried out in the following areas: accumulation of a considerable amount of transparent information; making mathematically grounded decisions; increase in the speed of decision-making due to complex analytics; narrow segmentation of the client base taking into account personal wishes; the development of goods and services of the next generation.

The prospects for using Big Data are related to the formation of macro indicators on their basis. Sometimes statistical information is somewhat conditional due to the shortcomings in collection of information and methods for calculation of individual indicators. The use of significant amounts of information of Big Data and analysis on its basis of indirect indicators that characterize the state of a particular phenomenon allows you to get the required indicator with a higher precision.

For example, Space knows has selected 6,000 companies in China to regularly update their photos database on their websites (Case Study: On China's Economy through an Unbiased Outlook; SpaceKnow, 2016). Using the analysis of these photos (building activity, number of cars in the parking lots, level of emissions into the atmosphere) and big Data technology the country's business activity indicators were determined for a certain period, and the results obtained differed on average by two points from official statistics.

Consequently, the development of information-and-communication technologies and information-and-computing technologies has changed the world, society, and economy on a qualitatively new level (Tetiana et al., 2018). Tools that can either substantially change the world, or even destroy it, are in the hands of a human who does not always have high moral and ethical values. Despite the new resource capabilities created as a result of the application of new technologies and, which should facilitate human life, a human is in a situation where it is under the pressure of a huge amount of information that is constantly growing and responsibility for the existence of mankind in its entirety. The entrepreneurs who have dared to create their business in the electronic environment are the most involved in this process in the economic aspect (Nakashydze & Gil'orme, 2015).

Economic sectors that are directly related to information-and-telecommunication technologies, as compared to traditional industry, are growing at a faster pace and gaining dominance.

The Internet gradually and organically covers such industry sectors as commerce, communications, media, advisory services, etc. Moving a large number of business processes into virtual space has led to the emergence and further development of a new sector of the economy-e-business.

1) Electronic economic activity of enterprises of the real sector of the economy, which transferred part of their activities in the electronic environment.

The development of technologies and innovations creates the preconditions for the intensive growth of e-business in the world. The most rapid growth is noted in the business segment to consumers (B2C). In 2016, the turnover of the e-business market in the world amounted to 1.9 trillion US dollars. Compared to 2014 Total turnover growth was 43.3%, compared to 2015-by 23.7%.

The trends established give grounds for experts to argue about further market expansion, where e-business enterprises operate in the world.

At the same time (taking into account the trends from 2014), the average annual growth rate will be 20.3%.

Analyzing world retail turnover in 2016 by region, it is important to note that the largest share of e-business in the retail segment was 12.1% in the Asia-Pacific region (Figure 1). 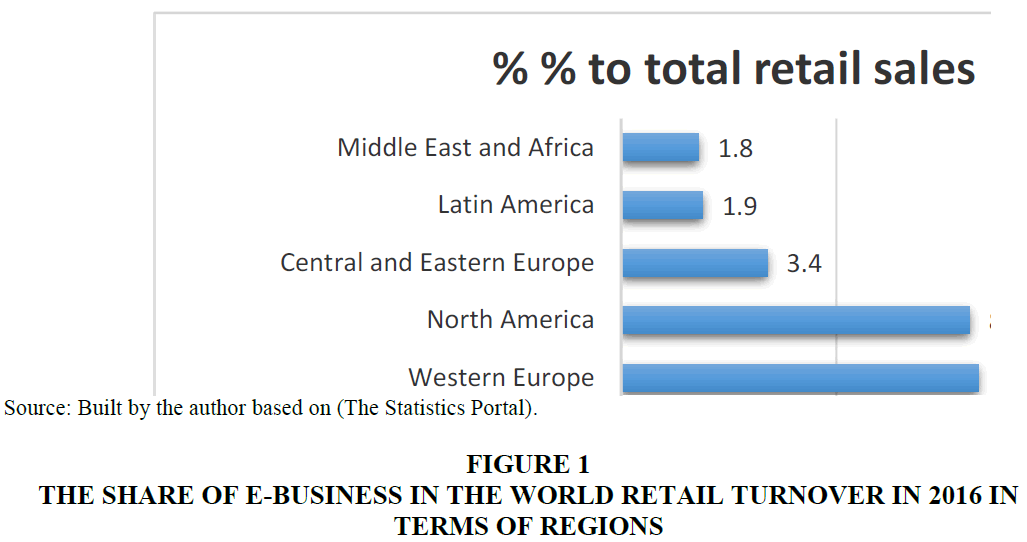 Moreover, the gap within the region is significant. In particular, in 2016, around 19% of all retail sales in China were made via the Internet, while in Japan this share was only 6.7%. The region also ranked first in the number of annual online transactions per capita: 22.1 for 2016. The countries of Western Europe and North America are significantly behind the average indicator of the Asia-Pacific region: respectively 3.8% and 4%. At the same time, the highest penetration of e-business in the world market-76% was recorded in the fourth quarter of 2016 in the UK, while South Korea ranked second with 72%. The number of online transactions of e-business enterprises reached 19% in North America in 2016.

In subsequent years, the planned growth of the share of e-business in retail trade is expected to grow to 14.6% in 2020, which is 1.97 times higher than the current indicator in 2016.

Among the countries with the most developed e-business market, China is ranked first (Figure 2); according to other studies, Brazil and Russia are also among the leading countries in this area; according to expert estimates, the turnover of e-business enterprises in 2016 amounted to 975 billion US dollars, which is by 208.5 billion US dollars or 27.2% more than in 2015. 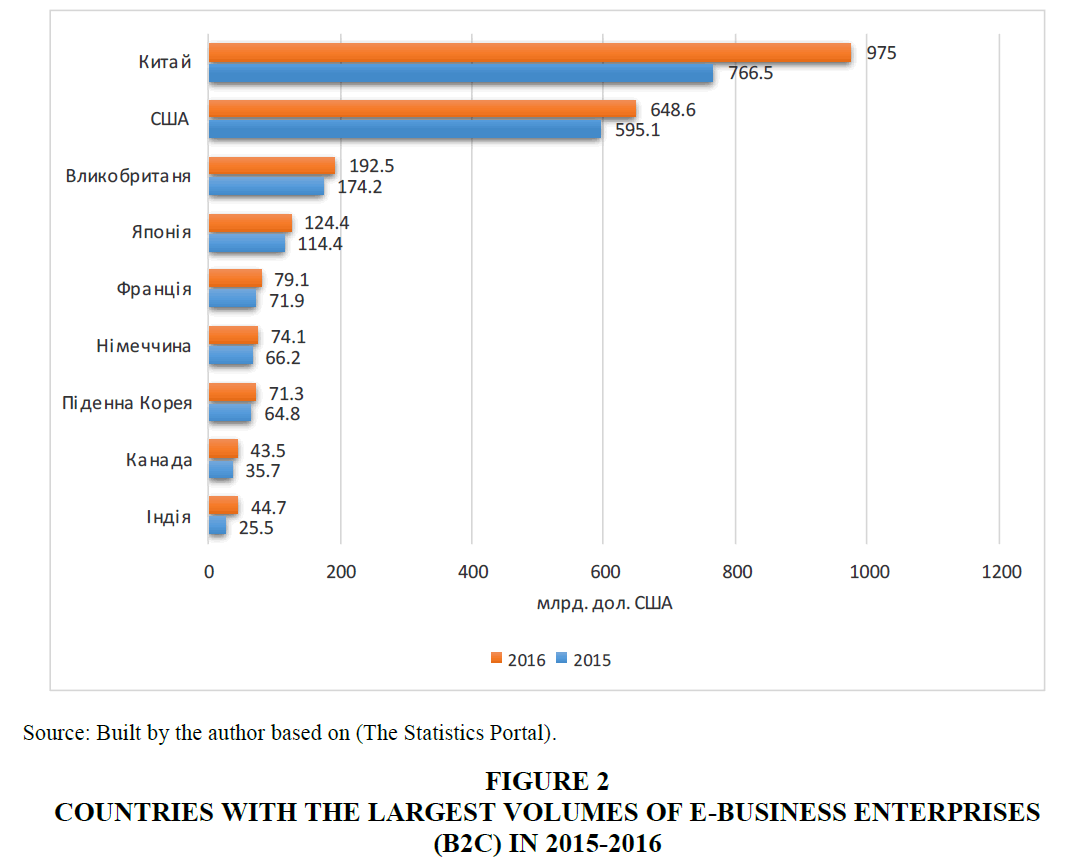 The United States are ranked second by the number of enterprises operating in the field of e-business. The market volume was 648.6 billion US dollars (66.5% of China market) in 2016. The growth of the e-business in the US market is not as dynamic as in China. In comparison with 2015, the turnover increased by 53.5 billion US dollars USD or 9.0%.

The results of our study are confirmed by the following studies. At the moment, computer science is a necessary cognitive practice through which theoretical and applied research is carried out, it is a powerful catalyst for scientific activity and society as a whole (Chen & Sun, 2017). Using computing, a digital cestus is created that helps a modern person to know the world and modify it.

The results of our study are confirmed by the following studies. At the moment, computer science is a necessary cognitive practice through which theoretical and applied research is carried out, it is a powerful catalyst for scientific activity and society as a whole (Chen & Sun, 2017). Using computing, a digital cestus is created that helps a modern person to know the world and modify it.

Within the framework of this research it was determined that for the further development of e-business in the world it is recommendations to: increase the purchasing capacity of the population; provide access to the Internet to as many people as possible; develop the infrastructure of the country (communication channels, roads); improve the current legislation aimed at support of the development of e-business (for example, the use of electronic money, use of e-business registers of settlement operations and provision of online buyers with the potential capability to make payments with credit funds, etc.).

Chen, X., & Sun, Y. (2017). A study on regional e-commerce development in china and its influencing factors.

SpaceKnow (2016). Case study: On China’s economy through an unbiased outlook. Retrieved from https://www.spaceknow.com/case-studies/china/

Yanina, R., & Andriy, Y. (2016). Formation of the mechanism of energy efficiency management on the basis of predator-prey concept. Problems of Development Modern Science: Theory and Practice.