This paper has investigated the effect of inflation, CPI and GDP on real exchange rate. The main purpose of this paper is to find out that how much selected macroeconomic variables influencing real exchange rate in Bangladesh in 1986-2017. Firstly, the paper showed descriptive statistic. This paper tested ADF unit root for showing whether panel data is stationary or not. By testing Johansen Test for co-integration paper has shown the relationship between real exchange rate with Gross Domestic Product (GDP), Consumer Price Index (CPI) and inflation rate. The results showed that in Bangladesh Purchasing Power Parity (PPP) did not hold and there had negative relationship among those variables. For measuring the stability of the model ECM, CUSUM and CUSUMQ tests have been applied. The results showed that the model was stable during 1986-2017. So at the end of this study, it is appeared that the trend of this model will continue in the next following years in Bangladesh. Purchasing Power Parity (PPP) didn’t hold and real exchange rate is highly influenced by selected macroeconomic variables.

Purchasing Power Parity (PPP) is a well-known non-classical theory of macroeconomics. It is well known because this theory indicates that in certain period of time, between two countries’ goods and services price should be equal. We can easily compare one country to another county’s production. Every economy calculates their annual production by their own currency by comparing all countries’ output determined by PPP. Generally PPP is highly concern for real exchange rates. This concept was developed for the purpose of determination of exchange rate model. In the days of financial liberalization and globalization international business were highly affected by the exchange rate not only in large economy but also is all over the world economy. In market exchange rate there is lots of limitation, like if one country’s currency value changes then exchange rate also changes. In every economy market exchange rate is determined by demand and supply, but for comparing different economy, PPP is appropriate. The objective of this research is to find out how much PPP are influenced by selected macroeconomic factors like Gross Domestic Product (GDP), Consumer Price Index (CPI) and Inflation Rate (INF). In every economy it is so much crucial to analyze which factor highly influences exchange rate for taking course of actions to develop the policies. That’s why this research topic has been selected.

Chen & Devereux (2003) found that US cities’ prices are lower compare to OECD countries. They didn’t found positive strong stationarity that might help PPP in United States of America (USA).

Christidou & Panagiotidis (2010) examined the effect of single currency in fifteen European countries on PPP are face to face US dollar ($) after and before appearance of the euro (€). Their unit root test has accepted PPP and at time stationarity didn’t support PPP.

Tweneboah (2010) found a long run relationship among exchange rate, interest rate and prices in Ghana during 1997-2007. PPP and UIP didn’t hold strictly relation between USA and Ghana over period 1997-2007.

Khan & Qayyum (2011) tested Johansen co-integration and bound test to find out the existing relationship between exchange rate and PPP. Their result showed that in long run there is a positive relationship. For eliminating deviation of long run PPP, error correlation suggested that nominal exchange rate was significantly playing a role.

Hoquea & Banerjee (2012) found that real exchange rate were not constant in Sri Lanka, Pakistan, India and Bangladesh over the period of 35 years. PPP did not hold in long run in those countries by considering unit root test.

The purpose of the study is to find out the factors that influence PPP in Bangladesh during 1986-2017. The general objective is to measure the relationship between real exchange rate, inflation rate, CPI and GDP. The specific object of this paper is to find out the effect of inflation rate, CPI and GDP on real exchange rate in Bangladesh economy with reference to 1986-2017.

This paper is fully based on secondary data; it didn’t attempt to deal with any primary data. For collecting data, difference sources like Bangladesh bank library, difference journal, newspapers especially world development indicator reports, different websites etc. have been used. This paper has used some macroeconomic variables like as Real Exchange Rate, Inflation Rate, CPI and GDP. To find out the stationary of time series data, Augmented Dickey-Fuller (ADF) test has been tested and Johansen long run co-integration model has been used to detect the long run association among these variables. To test the stability of the PPP model Cumulative Sum of Squares (CUSUMQ) and Cumulative Sum (CUSUM) have been used, Error Correction Model (ECM) has been applied to test structural stability. This paper also showed Descriptive statistics of variables. 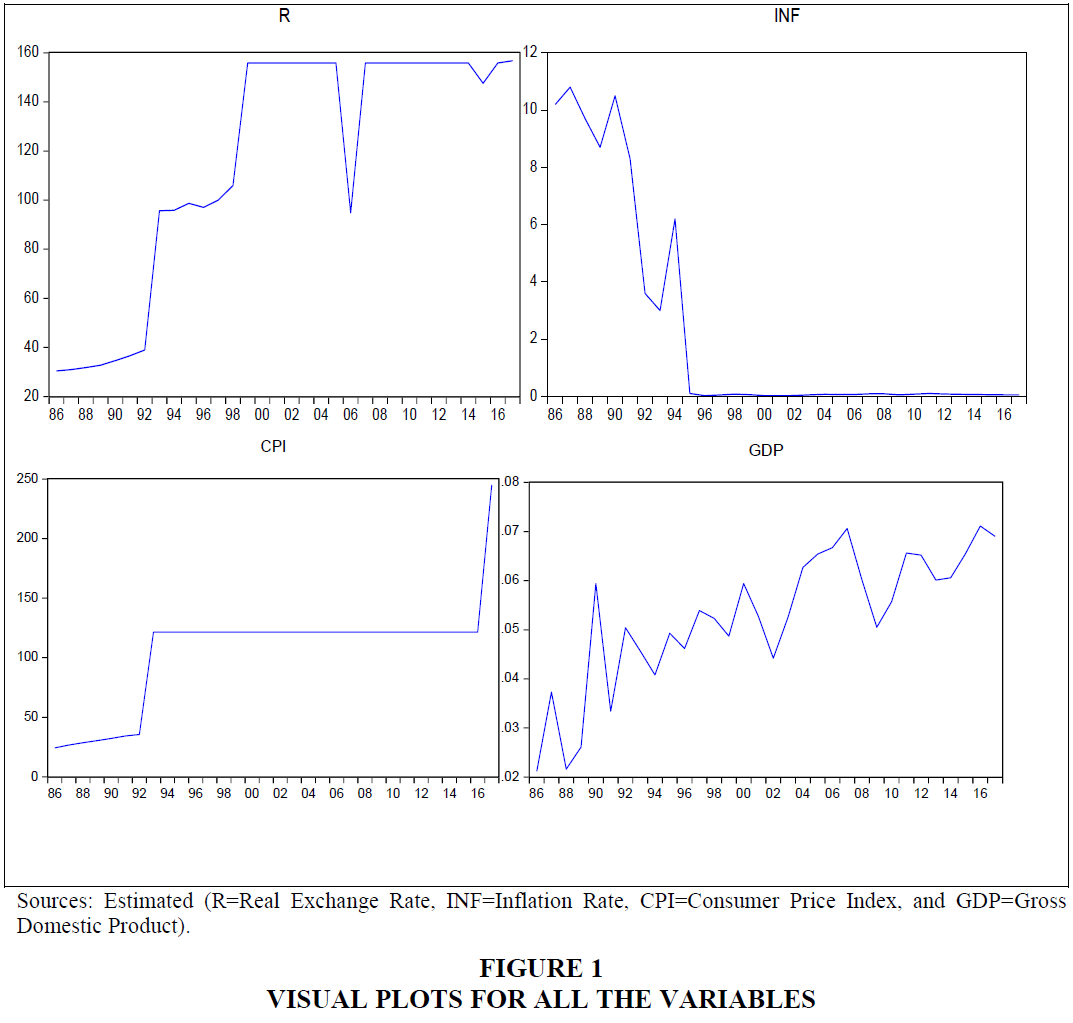 Figure 1: Visual Plots For All The Variables 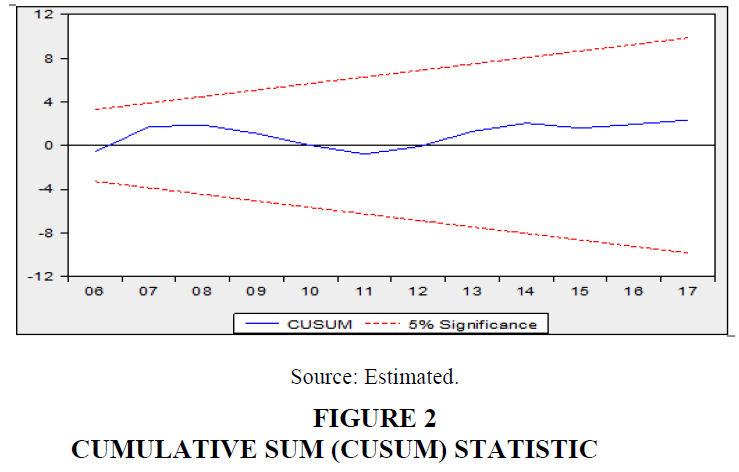 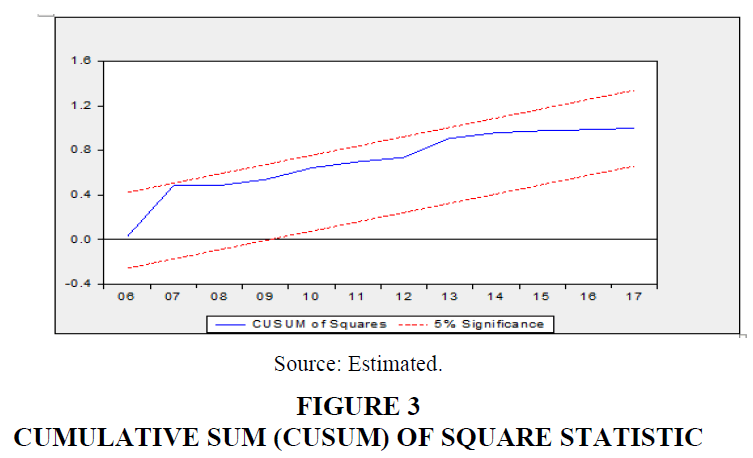 From Table 5, it is very clear that the relationship among all those macroeconomic variables were stable during 1986-2017. From R-squared value it is worth of saying that the data sets is relatively good for this work. Here real exchange can be explained properly because FStatistic is robust enough at 5% significant level (Khan & Qayyum, 2011). From Figures 2 and 3, CUSUM and CUSUMQ tests suggest that this model is stable in long run.

Jammeh, K. (2012). Long-and short-run determinants of demand for money and its stability in the Gambia: An empirical investigation. Research Paper, Bachelor of Science in Economics, University of the Gambia.