This study is aimed to determine the factors that influence student decisions in choosing private universities in Medan. The variables that observed were: education fee, promotion, brand image, motivation and facility as exogenous variable and student decision as endogen variable. The sample was determined by quota sampling on 150 students as respondents. The research data was obtained by surveys, questionnaires and interviews that then tested by testing the validity of the construct (indicator) and reliability test of the value of construct reliability. Data analysis used factor tests with regression weights and Confirmatory Factory Analysis (CFA). The model feasibility test used sample size, normality test and goodness of fit test. The results of this study indicate that the fee of education, promotion, brand image, motivation and facilities have a positive and significant effect on the decision of students in choosing private universities in Medan. All constructs forming each variable can explain its existence to latent variables. Moreover, the results of respondents' answers were also found that accreditation is a determining factor for prospective students in choosing private universities in Medan.

every new school year, universities in Indonesia are involved in the registration of new students. State Universities attract new students more easily than Private Universities. Various efforts have been made by Private Universities in Indonesia, especially in Medan City to attract the attention of prospective new students. It is no secret that there are a high number of private institutions that get little number of students. This is influenced by several factors such as public perception on the quality of education, the amount of school tuition (Shammot, 2011), the availability of facilities, facilities and infrastructure. Meanwhile, other factor such as the atmosphere conductive learning is also considered as one important factor to choose a university (Kitsawad, 2013). Other research factors that influence the interest of prospective students in choosing tertiary institutions is the factors that determine the decision of school graduates in choosing higher education studies, namely educational factors (in the family: education style, in school: teacher recommendations and career guidance), information factors (open, exhibitions, mass media), economic factors (study fee, career prospects), and other factors (geographical location, ranking, personal and demographic) (Eidimtas & Juceviciene, 2014). Other research results suggest that some factors that influence prospective students choose colleges are because of parents and friends suggestions, job opportunities, well-structured programs, quality of teaching, socialization, and flexibility in requirements (Ryan et al., 2014). The results of subsequent studies stated that the study program offered, qualified lecturers, flexible lecture schedules, student and staff relations, and campus environment influenced the choice of prospective students to continue their education degree, besides this study also found students' dissatisfaction with weak policies, study programs offered in each semester (Fosu & Poku, 2014).

Cost is the cash value or cash equivalent purchased for goods and services that is expected to bring current or future benefits to the organization (Hansen & Mowen, 2011). Promotion is the process which the company creates value for customers and builds strong customer relationships to capture value from customers as return. A brand is a name, term, sign, symbol, design, or combination thereof, which identifies a product or service from a seller or group of sellers and distinguishes them from competitors (Kotler & Armstrong, 2014). Brand image describes the extrinsic nature of a product or service, including the ways in which brands try to meet the psychological or social needs of customers (Kotler & Keller, 2012). Meanwhile, motivation is a desire within a person that causes the person to act (Mathis & Jackson, 2011). Moreover, facilities are physical resources that are exists before a service can be offered to consumers (Tjiptono, 2006). Provision of facilities is very important to support services that are non-physical. In addition, decision making is an integration process that combines knowledge to evaluate two or more alternative behaviors, and choose one of them (Peter & Olson, 2010). This study is aimed to determine the factors that influence the decision of students to choose private universities in Medan.

This research subject was students of private universities in Medan. The variables that were observed consist of education fee, promotion, brand image, motivation and facility as exogenous variable and student decision as endogen variable. Determination of the number of samples was used quota sampling that distributed to 150 students. The research data was obtained by survey, questionnaire and interview, then the data was tested by Confirmatory Factory Analysis (CFA) test or construct validity test (indicator) which measured whether the construct (indicator) was able or not reflecting the latent variable with the criterion of Critical Ratio (CR)>1.96 and Probability value (P)<0.05, and reliability test with criteria of construct reliability value of at least 0.7. The data analysis used factor test with regression weights and CFA, and the data processed with Amos 21 program. The feasibility test of the model used: (1) sample size of at least 5 times estimated parameters (Hair et al., 2010), (2) normality test with criteria critical ratio skewness ± 2.58 at the significance level of 0.01, and (3) goodness of fit test.

The respondents as the object of this study were 150 people. Meanwhile, the distribution of respondents was distinguished by gender (Table 1), the origin of private universities (Table 2) and semesters (Table 3).

The results of the validity test shows that each construct has a value of C.R.>1.96 and Probability value (P)<0.05, which means that all constructs observed are valid and have good convergence. While the reliability test results shows that the latent variable has a value of 0.873, in the value of the cut reliability construct 0.7, which can be concluded that the latent variable is reliable.

The results of the questionnaire (Table 5) showed that the average respondents who answered agreed as much as 42% and answered strongly agree as 35%. This indicates that the respondents choose private campus because the quality of graduates that is no different with the campus of the country. In addition, respondents also have strong willingness to study. The status as a student now makes the respondents confident; the tuition fee is in line with the quality of the study program, and the cleanness and tidiness of study room on the campus.

In addition, the results of respondents’ answers also found that accreditation is a determinant factor of prospective students to choose private universities in Medan.

The result of factor test was done with feasibility of model as follows (Figure 1). 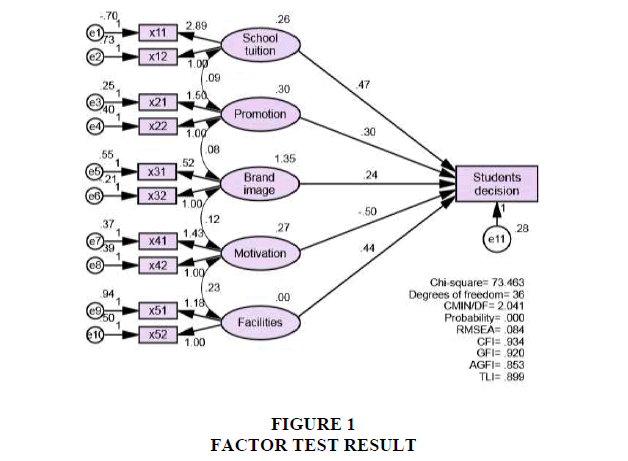 2. The normality test used the Critical Ratio value (C.R.) skewness ± 2.58 at the 0.01 level of significance. Normality test results show that the value of C.R. the entire construct skewness is in the range of ± 2.58, which means that it meets the normality assumption (Table 6).

The results of goodness of fit testing indicate that the Cut of value for Chi-square and GFI is good value, while for testing the Probability, CMIN/DF, RMSEA, CFI, AGFI and TLI, the values are marginal value.

The testing process of the hypothesis of this study used regression weights test to see the magnitude of the effect of education fee, promotion, brand image, motivation and facilities for student decisions. The test criteria were done by looking at the C.R. generated in the table regression weights value C.R.>2.58 at a significant level of 0.01 or C.R value.>1.96 at 0.05 significance level.

The testing process of the second hypothesis Table 9 used the CFA model (Confirmatory Factory Analysis), which means to test the construct theoretically (manifest) whether the construct is valid and reliable form as a latent construct. The students’ latent decay construct consisted of 5 dimensions of forming, they are: education fee, promotion, brand image, motivation and facility.

The result of the second hypothesis test shows that the value of C.R.>2.58, and each constructing construct has value of sig<0.01, which means that all constructing constructs were able to explain its existence to latent variables. Some of the constructs of this research are in line with the results of research (Padlee et al., 2010), which stated that the determinants of choosing colleges are: learning quality, cost, facilities, socialization and location.

Research of (Lien et al., 2015) also stated that brand image, price, trust and value influence the purchase intentions. In addition, the research of (Fure et al., 2015) also stated that simultaneously brand image, product quality and price significantly influence consumer purchase, meanwhile partially brand image and product quality significantly influence. In contrary, price variable have insignificant effect. Research of (Dahari & Ya, 2011) also stated that the main factors that influencing parents' choice of preschools in private institutions are brand, safety, quality of teaching and hygiene, besides English-speaking and faith-based schools as additional consideration. The same matter with this study was also stated by (Zain et al., 2013) who stated that there is a substantial positive influence of perception and promotion on the choice of students in choosing private higher education.

Conclusion And Direction For Future Research

The results of this study indicated that the cost of education, promotion, brand image, motivation and facilities have positive and significant effect on the decision of students to choose private universities in Medan, Indonesia. The whole constructor of each variable is able to explain its existence to latent variables. In addition, from the results of the respondents’ answers it was found that there were other factors, why prospective students chose private universities in Medan: because of accreditation. Thus, this study provides some suggestions and recommendations for private universities in the city of Medan Indonesia, in the form of: (1) private campus should provide more brochures containing various information about education on campus respectively to the community, (2) private campus sector should facilitate each classroom with air conditioners; (3) every private campus should be able to compete with other private campuses in terms of management; (4) each private campus should intensely inform their campuses to the public through various media as promotional media; (5) tuition fees set by each private campus should consider the capabilities of the surrounding community to pay. This research only focuses on the variable costs of education, promotion, brand image, motivation and facilities. The focus of further research is suggested to be directly at the developing of other variables in the improvement of the model that had been built in this study.

We wish to express our sincere appreciation to the Directorate of Research and Community Service, Directorate General of Research and Development Affirmation, Ministry of Research, Technology and Higher Education, Republic of Indonesia, for giving full sponsorship to this research work.

Polat, S. (2012). The factors that students consider in university and department selection: a qualitative and quantitative study of Kocaeli University, Faculty of Education students. Procedia-Social and Behavioral Sciences, 47, 2140-2145.