The Youth represent the hope and future of a country. They have a vital role to play with regard for fostering and strengthening of social consciousness against all social evils and lead the country to unity and prosperity. This is an unprecedented opportunity for global development: youth can be drivers of growth and development, if they are fully integrated in their societies and recognized as valuable human resources. The present paper dealt with profile of youth welfare programmes especially National Service Scheme (NSS) and Nehru Yuva Kendra Scheme (NYK) and their role to protect human rights. Participation of youth in the activities of NSS and NYKS has been examined in this chapter. Involvement of youth in protecting and promoting human rights has also been portrayed. The annual reports of NSS and NYKS were the major source of information. Focus group discussion also helped to gather details of the various programmes under NYK and NSS for youth volunteers. Both NSS and NYKS have enormous activities for improving the value system and personality of its representatives”.

“The Youth represent the hope and future of a country. They have a vital role to play with regard for fostering and strengthening of social consciousness against all social evils and lead the country to unity and prosperity” (Dewangan, 2005). “The immense resources of youth, if galvanized, can work as a major force of socio-economic change. It is therefore needed to create increasing opportunities for them to develop their personality and their functional capacity and thus make them economically productive and socially responsible (Ashifa, 2019). The ultimate criterion for development is determined by the extent in which each individual in a society is provided with opportunities to contribute to and gain from the development and advancement of the society (Amnesty International, 2005). But the youth faces a series of disparities that cripples them from participating in the development process. The situation of the youth in the world today is riddled with uncertainties because of the age as well as the changing socio-economic structures - as they are considered to be in a transition stage from adolescence to adulthood, facing many aspects of vulnerability” (Kumar, 2011).

“Youth development is a multi-faceted concept, it is equally necessary that all the relevant agencies, including the ministries and departments of the Central and State governments, and Local Self Government (LSG) bodies and Panchayati Raj Institutions (PRI) devise their plans and programmes bearing these aspects and features in mind” (Goi, 2004). “The youth policies recognize that an inter-sectoral approach is a pre-requisite for dealing with Youth-related issues. It, therefore, advocates the establishment of a coordinating mechanisms facilitating convergence in youth-related schemes, developing integrated policy initiatives for youth programmes (Amnesty International, 2007). The Union Ministry of Youth Affairs & Sports will be the Nodal Ministry for all such programmes and schemes and will oversee the implementation of the provisions of Policy. An effective mechanism to coordinate the activities of the Central Ministries/Departments, the State Governments and Community and Youth Organisations, would be evolved in order to facilitate timely execution of youth development programmes” (Walsh, 2008).

“The youth welfare programmes of National Service Scheme (NSS) and Nehru Yuva Kendra (NYK) serve as focal point for developing activities for student as well as non-student youth, particularly in rural areas to provide opportunities for development of their personality and skills enabling them to act as vanguard in the process of development. NYKS and NSS are the major schemes of the Ministry, encompassing a major part of activities in respect of institutional, functional and financial terms. They are involved in the engagement of youth in various initiatives like rural development, environment protection, blood donation, immunisation, disaster management etc. These have the potential to foster national and social values among the youth and develop a sense of responsibility towards the nation. The schemes like RGNIYD, Youth Hostel, NPYAD, NYCS constitute the core of the youth network. Under the rest of the schemes, financial assistance is provided to Youth organizations and institutions including voluntary organisations, for youth activities. The scheme of Youth Hostels is the only infrastructure scheme of the Ministry, aimed at promoting youth travel and hostelling. Under the scheme of Scouting and Guiding, grant-in-aid is provided to Bharat Scouts and Guides for conducting training camps and holding of jamborees etc. throughout the country. Their contributions in the field of human rights were scrutinized in the study”.

“Youth is best understood as a period of transition from the dependence of childhood to adulthood’s independence. That’s why, as a category, youth is more fluid than other fixed age-groups. Yet, age is the easiest way to define this group, particularly in relation to education and employment, because ‘youth’ is often referred to a person between the ages of leaving compulsory education, and finding their first job”(ILO, 2013). “Almost one in five persons in the world is aged between 15 and 24, the majority living in developing countries. India has the largest youth population in the world; around 66 per cent of the total population (more than 808 million) is below the age of 35. Nearly 40 per cent of the Indian population is aged 13 to 35 years” (ILO, 2013). Table.1 illustrates the share of youth population projection in India during the period of 2001 to 2026.

“According to the 2011 Census the youth in the age group of 15-29 years comprise 27.5% of the population. India is expected to become the 4th largest economy by 2025, contributing about 5.5%-6% to the world GDP, only after the United States, China and Japan. While most of these countries face the risk of an ageing workforce, India is expected to have a very favorable demographic profile” (Goi, 2003). “The population of India is expected to exceed 1.3 billion by 2020 with a median age of 28 which is considerably less than the expected median ages of China and Japan. The working population of India is expected to increase to 592 million by 2020, pointing to the fact that youth will make a significant contribution to the economic development of the country. This ‘Demographic Dividend’ offers a great opportunity to India” (Goi, 2014).

“This is an unprecedented opportunity for global development: youth can be drivers of growth and development, if they are fully integrated in their societies and recognized as valuable human resources” (Quinn, 2004). “Any idea of national development is just a myth without the active participation of youth in it. The youngsters are dynamic, have passion and are inspired. Their bubbling enthusiasm has to be regulated and utilized. Their surplus power has to be exploited for welfare of the country. Proper guidance and direction can bring them in the forefront of national development. The youth who do this work are amazingly courageous and passionate” (Rasi, 2020). “Standing witness and taking action helps shine light on issues and problems that need urgent change. The youth “are shaping social and economic development, challenging social norms and values, and building the foundation of the world’s future” (UN, 2007). “According to Dewangan, et al., (2005) young people have the capacity, the energy, the right to take responsibility and experience decision making in the life issues. They also have the right to be taught life skills and social skills so that they can become empowered adults. Youth Advocacy is at all times a human rights approach with young people” (UNOY, 2008). “This perspective rejects the welfare model which does not empower young people and at best still leaves the young person dependent on social structures. It aimed to prevent the diminution of a young person's self-respect, caused by paternalistic and authoritarian attitudes of those people who have professional authority over the young person's life -teachers, lawyers, law enforcement authorities as well as well-meaning but misguided social workers, youth workers, probation officers and others within the helping professions” (Ashifa, 2021).

Sources of Knowledge on Human Rights

As per the facts from figure 1, 86.6% of the youth got knowledge on human rights from the newspapers and 63.5% mentioned about the media. The influence of mass media is very high and information relating to human rights violation was provided authoritatively. Human rights information was also received through orientation in schools and colleges. Magazines, periodicals and books on human rights also helped to promote human rights awareness among youth.

Training is vital to impart knowledge on human rights among youth. The study examined the training for youth in human rights. Table 2 shows that youth participation in the training on the basis of group as NSS and NYK. 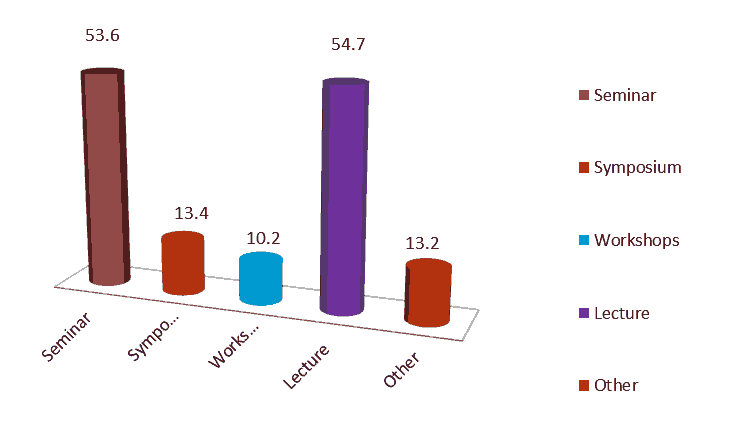 Figure 2 reveals that seminars and lectures were the major modes of training given to the youth. As 53.6% of the youth have attended seminar and 54.7% were attended special lectures on human rights. The study further revealed that 13.4% have attended symposiums and 10.2% have attended workshops on issues related to human rights. A part from this short term orientation, film shows, street plays and conferences were also organized for creating human rights awareness and knowledge. 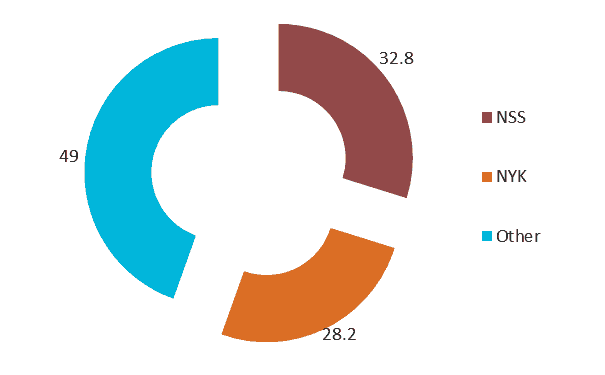 Figure 3 reveals that 32.8% of the youths National Service Scheme and 28.2% of the youths of Nehru Yuva Kendra. It shows that involvement of NSS volunteers in human rights activities is higher than the NYK club members. But 49% of the youth are involved through other source like political parties, social activity clubs and voluntary organization.

Human rights remain a dream rather than a reality. Violations exist in all parts of the world in various forms. Youth can protect the rights of fellow human being. Figure 4 illustrates that youth opinion of youth on human rights violations 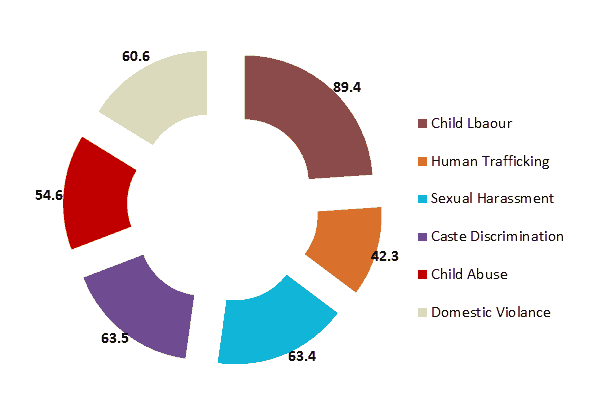 The State has to protect the rights of its citizen. In India, human rights monitoring and protection is being regulated through Protection of Human Rights Act in 1993. Human rights commission, child protection forum, Women’s commission, legal service authority is the major protective mechanisms in Kerala. 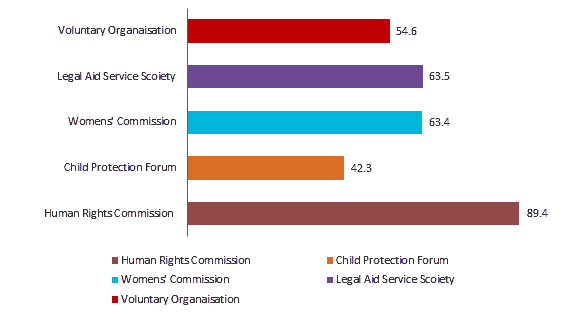 Figure 5 reveals that human rights commission is considered as the major human rights protective mechanism by 89.4% respondents. 43.5% had knowledge on the function of child protection forum and 54.6% appreciated the effort of voluntary organization for the protection of human rights. Women’s commission and Legal Aid Service Society had also played major role in protecting the rights according to 63.4% and 63.5% respondents respectively.

The present study was focused to find the role of youth to protect human rights and their involvement in the activities of welfare programmes as National Service Scheme (NSS) and Nehru Yuva Kendra (NYK). NSS is a major youth activity intended to engage the students of colleges and universities in community service on a voluntary basis. NSS volunteers work in adopted villages, colleges, school campuses and in urban slums for environmental protection, health literacy, and legal literacy. The study revealed that NSS provide various opportunities to its volunteers to protect human rights through its activities. NSS had collaboration with Kerala Legal Aid Service Society, District Legal Aid Service Society and Non-governmental organizations like Jananeethi, Nervazhi etc. These collaborative efforts helped to involve the NSS volunteers on legal as well as civil rights issues. The study further revealed that Nehru Yuva Kendra also organized activities of national and international relevance. Youth leadership camps, sports and cultural competitions, adventure activities and vocational training programmes were organized for the personality development of the youth. Discussion forums and seminars for creating awareness on current issues were given special emphasis as also women empowerment. National integration camps were organized to the rural youth to travel across the country to feel diversity of this great nation. Being the national agency for youth development, the NYK initiated a number of programmes to promote social integration and co-existence of the people in the society.

Anasica, S., & Sweta, B. (2020). Analysing the factors involved in risk management in a business. International Journal of New Practices in Management and Engineering, 9(03), 05-10.