Conceptually, the Constitution as a resultant in the field of politics, economics, social, and culture is interpreted as the Basic Law that contains at least 3 (three) aspects, namely the assurance of human rights and its citizens, the administration of the state of a fundamental nature, as well as the division and limitation of constitutional duties that are also fundamental (Nggilu, 2014).

4. Severs disputes on the results of elections; and

1. As the guardian of the constitution;

2. As a decision controller based on the democracy system (control of democracy);

3. As the supreme commentators of the constitution (the soul and the highest interpreter constitution);

4. As an of the citizen's constitutional rights;

5. As the protector of human rights.

It is undeniable that the placement of the legal testing of law against a country's constitution requires an interpretation activity that is related to the history of testing occurring in the case of Marbury vs. Madioson (Sardini & Suswantoro, 2016) and the history of Constitutional Court formation in Austria pioneered by Hans Kelsen as one of the designers of the Austrian Constitution (Asshiddiqie, 2010). change which in principle required an autonomous judicial institution that can regulate the implementation of basic legal provisions and ensure that the implementation of the Constitution shall be held responsibly.

The true testing is an act that is in the judges, even Haron Alrasyid (2004). mentions as a right that the judges have as well as an obligation. In accordance with the opinion of Harun Alrasheed, Bahtiar (2015) mentions the action of regulatory testing is inherently inherent with judicial power and is the nature of the innate of the judges ' duties in carrying out the adjudication function. Furthermore, mounts the use of the Constitutional Testing Ordinance of a regulation to submit a mechanism undertaken to ensure product legislation does not contradict the basic legal norms and does not harm the rights of citizens that are secured by the underlying law (Bahtiar, 2015).

According to Susi Dwi Harjanti, the interpretation carried out by the judges is no exception of th g vcbbe constitutional judge is the authority whose nature is inherent to the task of the judge in completing a cause, including also in the process of implementing a provision in the regulation to the concrete case filed into court (Harijanti, 2019).

"Any ruling of the People's Consultative Assembly is determined by deliberation for consensus or voting by prioritizing the first way" (Isra & Amsari, 2019).

1. Simply use (citing) the articles in the Constitution as a basis for testing (without further elaborating the meaning behind the text of the constitution);

2. Mention the principles or values of the Constitution as the basis of testing (without specifically mentioning the clauses in the basic legislation used as a tested stone);

3. Not mentioning the basis of testing norms (consideration of the Tribunal judges directly concluded that the norm is tested (not contrary to the Constitution).

"The people collectively were constructed by the Constitution 1945 providing a mandate to the State to hold policies (Beleid) and management actions (bestuursdaad), arrangements (regelendaad), Management (beheersdaad) and supervision (toezichthoudensdaad) for the maximum purpose of people's prosperity"

The court ruling has indirectly changed the sound of article 24 B paragraph (1) 1945 from the original meaning: 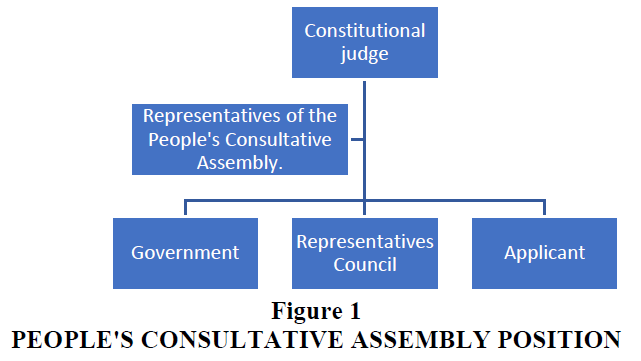 The involvement of other institutions to provide an interpretation of the Constitution in front of the Constitutional Court, for later consideration in issuing the right verdict is not something new. In comparison with the judicial institutions in other countries, call it the United States and Australia, the concept of deference is an approach used by the judiciary to open space from other institutions deemed to have a broad capacity and understanding in the testing of the courts. Deference is conceptually interpreted as an approach to the judicial review process conducted by the Court as a form of reconciliation between the rule of law and the parliamentary supremacy, more fully; Alan Freckelton provides the following explanation:

A reflection of the implementation of deference on the American Supreme Court can be traced to the resolution of the case of Skidmore v Swift & Con1944, as well as the case of Chevron USA Inc & Natural Resources Defense Council Inc 1984, while in Australia can be traced in cases of R v Hickman; Ex parte Fox 1945 the case is similar to the Chevron cases in the United States.

In this second scheme, it will reflect two concepts incorporated for the formulation of counterbalancing interpretation designs. The two concepts are:

2. The concept of constitutional dialogue. In describing this concept, it became relevant to describe the opinions of Anne Meuwese and Marnix Snel who formulated as follows:

"A sequel of implicitly or explicitly shaped communications back and forth between two or more actors characterized by the absence of a dominant actor-or at least by bracketing of dominance-, with the shared intention of improving the practice of interpreting, reviewing, writing or amending constitutions." (Meuwese & Snel, 2013).

Given the views of Meuwese and Snel (2013), the Constitution dialogue is a good stage in both expressed and implied ways that form two-way communication between two or more, actors to balance from the dominance of certain actors, intending to develop the practice of interpreting, testing, forming, or altering the constitution.

Figure 2 People's Consultative Assembly for the Interpretation of the Constitution

Bahtiar. (2015), Problems in the implementation of the constitutional court decision on judicial review of the law against the constitution. Self-Help Propagation Group: Jakarta.

Bisariyadi, A. (2016).  Interpretation of the constitution in the testing of the law against the constitution. Report on research centre results, assessment, and management of information and communication technology.