In the current economic situation, clusters are one of the most effective forms of financial/knowledge-based capital integration providing necessary competitive advantages (Breault, 2000; European clusters, 2004; Ruigrok & Van Tulder, 1995). In recent years, state programs implemented in the most developed countries are focused on developing the so-called cluster strategies (Herliana, 2015; Dohmann et al., 2016; Cheng et al., 2017), which purpose is to put the advantages of their own national economies into realization. Forming innovation clusters facilitates the effective integration of financial/knowledge-based resources both inside and outside the cluster (Eder et al., 2017; Park et al., 2016; Schindler, Fisher & Shonkoff, 2017).

The difference between an innovation cluster and other forms of economic integration (Njos & Jakobsen, 2016; Raines, 2017; Burdina, Kaloshina & Chizhik, 2017) is that companies that are under the cluster do not go for a full merger (Vaz et al., 2014; Lai et al., 2014; Lee, Lee & Oh, 2017), but create an interaction mechanism that allows them to retain the status of a legal entity and at the same time, cooperate with other enterprises forming another cluster (Bellandi et al., 2014; Krebs, 2016; Yoon, 2017). There has been a complex combination of competition and cooperation shaped within the clusters, especially in the context of innovation processes (Salvador, Mariotti & Conicella, 2013; Yim, 2014; Zheng, 2017).

The concept of the long-term socio-economic development of Russia for the period until 2020 indirectly determines the objectives of the cluster policy: the territorial-production clusters targeted at high-tech manufacturing in the priority sectors of economy with concentration of such clusters in the urbanized regions. The most well-defined suggestions came from the selected 25 clusters. Their consolidated revenues in 2016 amounted 3810,6 bln roubles, when compared to 2011 the increment equals to 105% if measured in 2011 roubles. The programs that put forward cluster development as a focal point or are in conformity with it were worked out in the Kaluga Region, the Novosibirsk Region, the Krasnoyarsk Region and Republic of Tatarstan (Akhmetshina, Ignatjeva & Ablaev, 2017; Ablaev, 2017; Ablaev & Akhmetshina, 2016). These programs are primarily aimed at increasing of competitiveness, encouragement of the innovative activity and new high-technology manufacturing, marketing development and expansion of the cluster geography (Ablaev, 2015, 2015b & 2015c).

The objectives that meet the interests of the subjects of the Russian Federation principally focus on the various aspects of their social and economic development. Thus, for example, in Moscow region the goal definitions of the regional cluster development programs prioritize such positions as the regional budget replenishment and the employment of population.

Thus, improving innovation clusters is an important task considered at the state level (Eder et al., 2017; European clusters, 2004; Garifullin & Ablaev, 2015). In this regard, the purpose of this article is to consider and determine the prospects for innovation cluster development.

The scientific methodology of this article is based on a system approach to the problem and a comprehensive analysis of economic interaction processes that occur within the clusters. The methodological basis involves domestic and foreign papers on the theoretical issues of innovation cluster development and economic cooperation, as well as project/program efficiency assessment.

As examples, we reviewed 13 regions of Russia.

The analysis of the regional ITC (International Technological Cluster) development programs shows that all the programs can be subdivided into two groups: the first one primarily focuses on the immediate interests of the subjects of the Russian Federation, while the second group regards the cluster functioning and the cluster development perspectives (Figure 1). 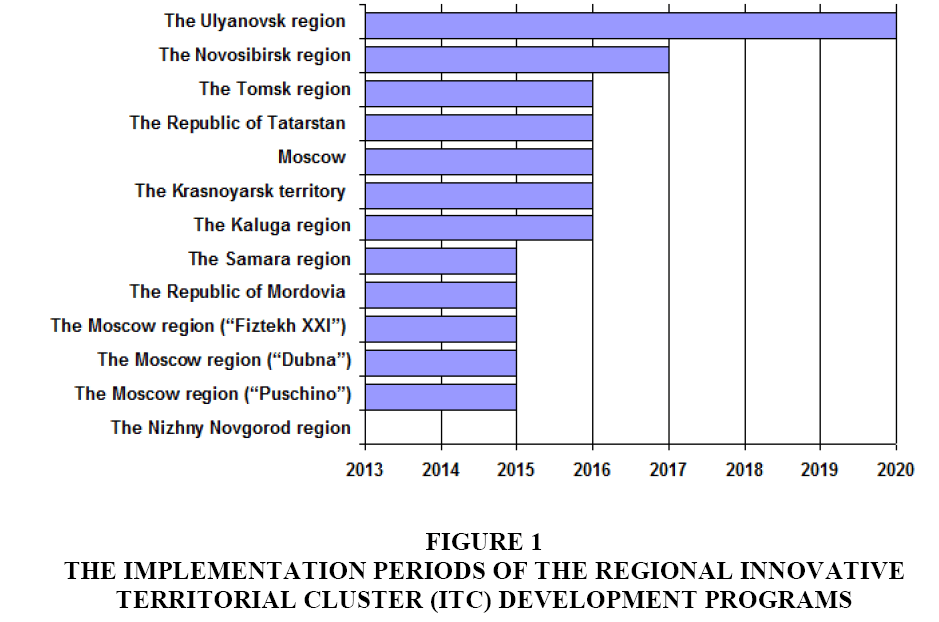 The analysis of the regional ITC development programs was undertaken by means of the Green Book methodology. This methodology presupposes grouping of all the goals set by the examined cluster initiatives in the 6 blocks (Figure 2): Research and Networking, Policy Action, Commercial Cooperation, Education and Training, Innovation and Technology, Cluster Expansion. 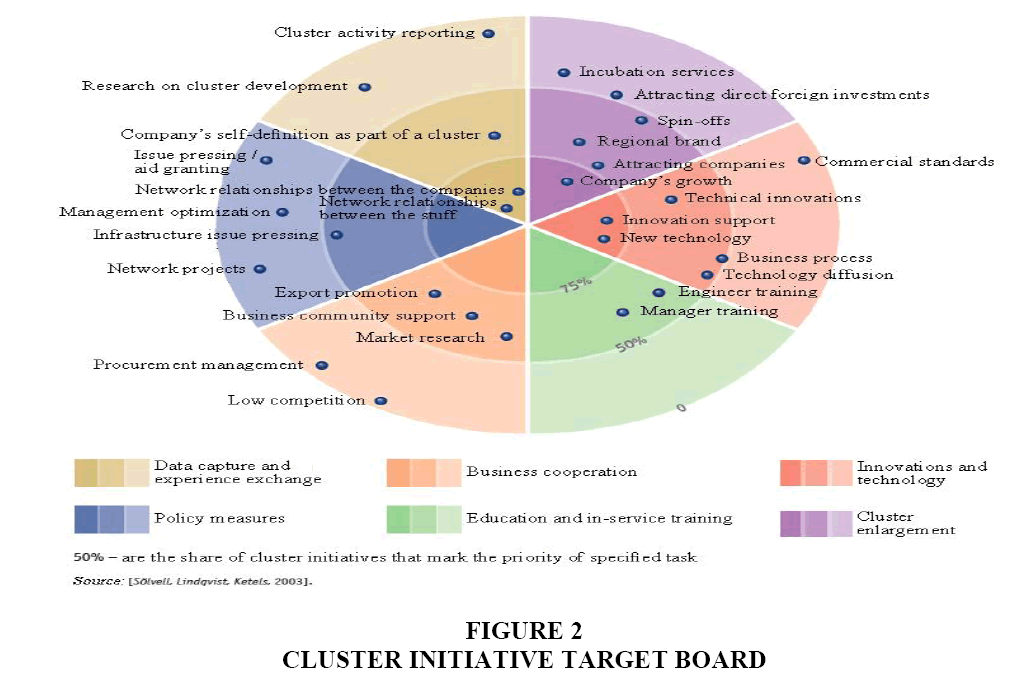 The range of the blocks selected for our investigation as well as the criteria of classification of the ITC program goals according to the given directions or target blocks (Figure 1) does not exactly conform the methodological approaches specified in the Green Book, but to a large extent they are matching. This is conditioned by the terminological peculiarities, specificity of the objectives listed in the programs and the current level of the cluster initiatives development in Russia. Many foreign clusters have a longer-term development history and as a result-more comprehensive range of priorities.

It is noteworthy that not all the mentioned directions were included in the objectives listings of each program (Figure 3). 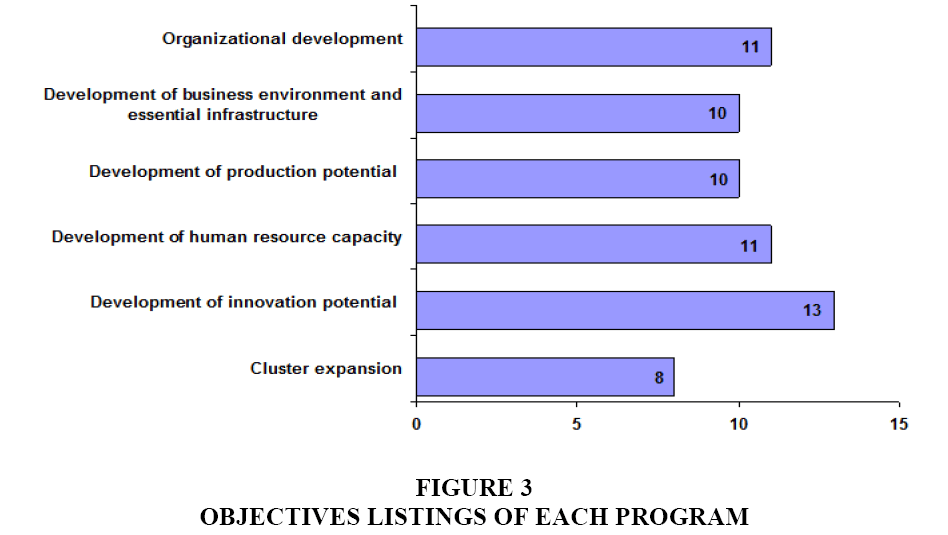 Figure 3: Objectives Listings of Each Program

The only exception turned to be the innovative potential development: all the 13 programs contained goals correlating with this sphere. The objectives regarding the cluster expansion were underrepresented. Probably, such a lack of attention to this development thrust may be attributed to the fact that ITC are still in a formative stage (Mikhailovich et al., 2017). For this reason they focus on the accomplishment of the current development needs to the detriment of more challenging tasks that require a certain anticipatory arrangement (Table 1).

Hence, the block “Organizational development of the cluster” comprises two groups of the objectives characterized by a medium frequency of mention. One of them is oriented to the development of the specialized organization (the goals of this group are present in 6 programs out of all 13), the other focuses on stimulation of the intra-cluster self-organization and communication (such goals are present in 7 programs out of all 13).

The block “Development of business environment and essential infrastructure” implies improvement of the essential infrastructure (social, engineering, energetically, transportation) and improvement of the institutional environment in the cluster territories in general-the goals of this type occur in 8 programs. At the same time the development potential of the ITC through optimization of regulation falls aside the priorities-the goals of this group were disclosed only in 2 programs. In further elaboration of the program documentation on the regional cluster policy regulation it is advisable to make a special emphasis on the problems of administration and development of the cluster support mechanisms on the side of the regional and local authorities.

The goals stated in the section “Development of the production potential” were united in two groups: intensification of the commercial and productive cooperation (it occurs in 7 programs) and stimulation of the investment activity (these goals are less popular-only 5 programs contain them).

As mentioned before, the goals of the block “Cluster expansion” are the most infrequent in the regional programs. Only 5 programs prioritize the encouragement of the small and medium-sized businesses, including startups and spin-offs. A greater emphasis is put on promotion of the cluster products and brands-8 programs contain such problematic.

The comparison of the domestic and foreign programs in the aspect of the goals placed before the cluster initiatives shows distinct differences: the Green Book suggests 28 priorities, while the analysis of the domestic program documents allows classification of the goals in 15 groups only. Such disproportion may be particularly attributed to the incommensurable numbers of the objects under consideration (more than 250 foreign cluster initiatives vs. 13 Russian ITC development programs); this mere fact limits the detectability of the goals often specific for the or another cluster.

The goals of the regional ITC development programs were also analyzed from the perspective of their orientation to the multiscale spheres of activity (Figure 4). 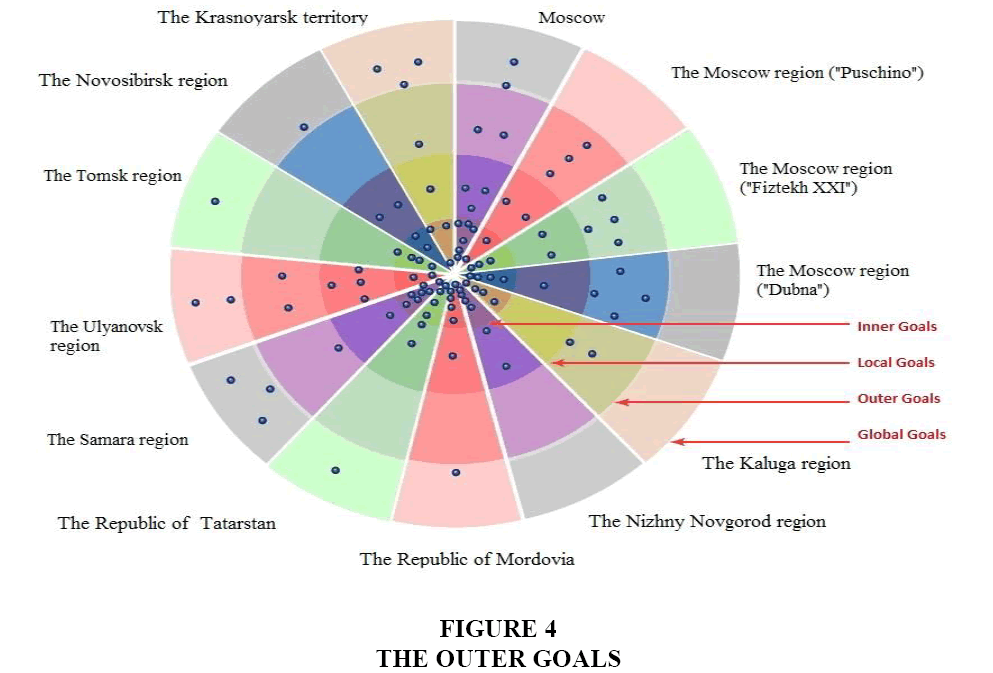 For this purpose all the goals were classified in the following categories:

1. Internal goals, focusing directly on the cluster and its members. They involve the problems of the self-organization and cooperation interaction of the cluster members within all the range of the joint projects including the innovative infrastructure development, advanced studies and professional training programs for the scientific personnel, engineers and executives of the firms of the cluster.

2. Local goals, focusing on the cluster territory and regarding the problems of the business environment improvement and development of the essential infrastructure objects.

3. Outer goals, focusing on the concrete subject of the Russian Federation, the immediate cluster location. The prevailing problems in this group are as follows: promotion of the region’s investment attractiveness and development of its industrial, educational and human resource capacity.

4. Overarching goals, focusing on the external sphere outside the cluster location-the subject of the Russian Federation where. This group comprises the following aspects: geographical expansion of the cluster’s influence, introduction of the cluster products to the Russian and global markets, development of the cooperation interaction between with the foreign partners.

The outer goals are missing in the regional programs of the innovative territorial clusters in the Republic of Mordovia and Tatarstan, in the Nizhny Novgorod, the Novosibirsk and the Tomsk regions.

The overarching goals are not provided for the ITC located in the Kaluga, the Nizhny Novgorod and the Moscow regions. The goals of this category typically occur in the programs of the city of Moscow, the Samara and Ulyanovsk regions, in the Krasnoyarsk territory. This peculiarity can be linked to the stable competitive positions of the clusters in the international markets; the improvement of these positions also is an aspect of the regional programs.

The elements of SWOT analysis were classified by analogy with the mentioned blocks of goals (Figure 5):

Figure 5: Swot Analysis of the Target Board

1. Organizational development of the cluster;

3. Development of the production potential;

5. Innovative potential of the cluster;

Such approach allows us to estimate the acuteness of the problems typical of the clusters and their territories and the relevance of the goal sets stated in the programs.

The program by the Ministry of Economic Development of the Russian Federation enacts formation of the cluster development organizations until 2025. In contrast to the foreign cluster initiatives, the Russian ITC give higher priority to provision of the essential conditions for clustering, for example to enhancement of the objects of innovative, basic and educational infrastructure. The frequency of this problematic reveals that the regional authorities primarily link the competitive potential of the pilot ITC to the realization of the sensible infrastructure projects.

The comparison of the domestic and foreign programs in the aspect of the goals placed before the cluster initiatives shows distinct differences: the Green Book suggests 28 priorities, while the analysis of the domestic program documents allows classification of the goals in 15 groups only. Such disproportion may be particularly attributed to the incommensurable numbers of the objects under consideration (more than 250 foreign cluster initiatives vs. 13 Russian ITC development programs); this mere fact limits the detectability of the goals often specific for the or another cluster.

The mentioned characteristics of the goal system typical of the regional cluster programs point to the regency of the domestic cluster initiatives. In prospect in the process of actualization of the program documents regulation on the ITC development the range of the problems and goals set forward by the clusters and regional public bodies will definitely expand.

Effective clusters give a boost to innovation while their members gain advantages, such as susceptibility to innovation, rationalization, outpacing productivity growth.

The innovation cluster includes the whole innovation chain: from generating scientific knowledge and business ideas on its basis to selling market products (Figure 6). 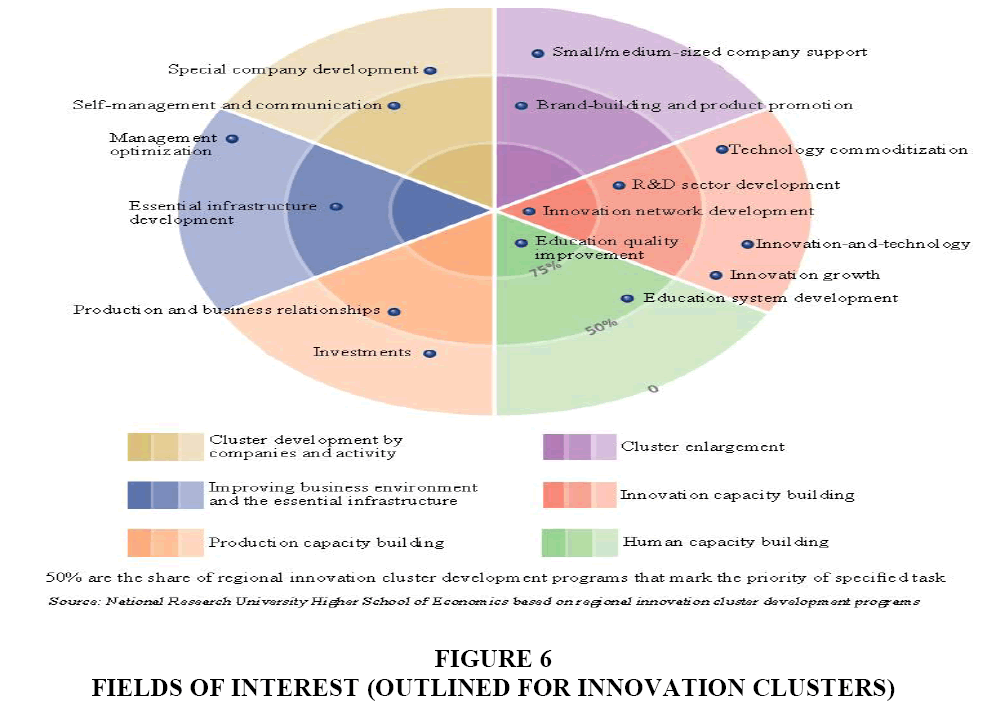 The main problems in the development of regional clusters that require follow-up solutions:

1. Lack of assessment of the potential cluster market. When using the cluster approach, the emphasis should not be on the existing system of production organization, but on the analysis of markets

2. Ignoring the "communicative" nature of the cluster. One of the strengths of the cluster approach is that it allows us to isolate the corporate structure (the main players) of a particular sector and also to form a potential partnership system, which is necessary for cluster development.

3. Solving these problems our article can be used as a theoretical source.

Ablaev, I.M. & Akhmetshina, E.R. (2016). The role of the public private partnership in the innovation cluster development. Journal of Economics and Economic Education Research, 17(4), 220-232.

Yoon, D. (2017). The regional-innovation cluster policy for R&D efficiency and the creative economy: With focus on daedeok innopolis. Journal of Science and Technology Policy Management, 8(2), 206-226.