Organizational leadership has been broadly described from schools of thought that can be categorized as either a leader’s personality disposition type (trait based school of leadership thought) and the capacity of the leader to engage employees for the accomplishment of organizational goals (task based school of leadership thought) (Gençera & Samurb, 2016; Shao, Feng & Hu, 2017). Task orientation of leadership focuses on the extent to which leaders are particular about responsibilities, maintaining communication linkages that ensure the realization of organizational objectives (Golmoradia & Ardabili, 2016). This study identifies that transactional and transformational leadership styles represent the task oriented leadership, while trait oriented leadership is largely associated with the leader’s personality, such as the extent to which the leader is receptive, hospitable, willing to work with a team and focused on the work. The trait leadership orientation includes: autocratic, democratic, charismatic and bureaucratic dimensions of leadership.

Transactional leaders are basically driven by the task that should be performed. Therefore, their operations in the organization are characterized by contingent rewards for performance of responsibility and management by exception (Hu, Parker, Lipsitz, Arriaga, Peyre, Corso, Roth & Yule, 2016; Falola, Salau, Olokundun, Oyafunke-Omoniyi, Ibidunni & Oludayo, 2018). Despite that this leadership style could achieve the task being pursued; a major limitation associated with it is that result in employee stress and their loss of commitment (Perry, Witt, Penney & Atwater, 2010). On the other hand, the transformational leader focuses on motivational patterns to accomplishing organizational tasks. Consequently, the transformational leader uses idealized influence, inspirational motivation, intellectual stimulation and individual consideration to influence subordinates interest towards getting work done. These two leadership orientations are generally described as task based leadership orientations because, broadly speaking, they influence how leadership in the organizational system and the flow of authority in the organization is perceived, rather than how individual lead subordinates towards the attainment of organizational goals.

As conceptualized in this study, the trait leadership orientation is personalized because it relates to the extent which leaders guide, motivate and inspire employees based on their personality. These dimensions of leadership are considered to be relational because they connect the leader directly with the subordinates in the process of work (Khalaj, Khabiri & Sajjadi, 2011). According to Popa (2012), democratic leadership style is traceable to the extent which leaders express extraversion and agreeableness with their subordinates, while autocratic leaders express conscientiousness towards tasks. The relationship between autocratic, democratic and laissez-faire leadership and higher institutional effectiveness has also been demonstrated (Tatlah & Iqbal, 2012). Therefore, in order to establish a fusion between the two ends of the task-based and trait-based dimensions of leadership orientations, this research operationalizes leadership orientation to reflect a real life situation. The theoretical framework presented in Figure 1, shows the direction of this study. 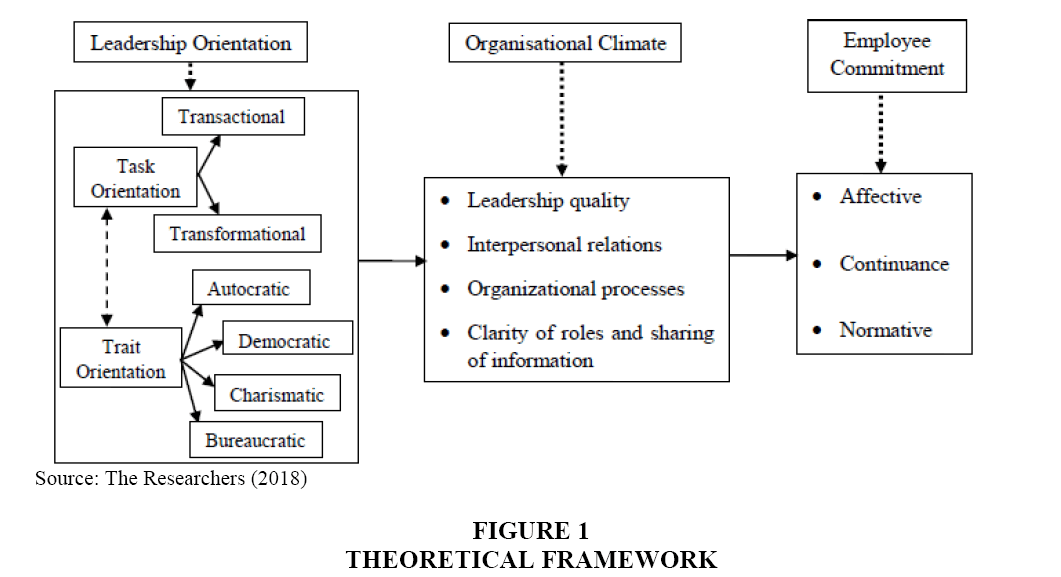 This research adopted well-structured questionnaires as a means of gathering opinion from respondents. Section A included questions that were targeted at gathering information on the respondents’ demographic and organizational information. Section B was designed to collect information on the opinion of respondents to the constructs used in the study. The questions in Section B captured the three dimensions of organizational commitments. The copies of questionnaire were administered to the respondents in the five banks used for this study. The banking industry formed the basis for this study because of the industry is associated with a high rate of employee turnover activities resulting from employees’ thirst for more ethically conducive working condition (Gberevie, 2010). The study population from which the sample was drawn for the study consists of five selected money deposit banks formerly known as commercial banks in Lagos state, Nigeria. The reason for choosing these five banks is because they have the largest asset base (The Banker, 2015; Uwuigbe, Uwuigbe, Igbinoba, Adegbola & Otekunrin, 2016). One branch from each of these five banks was selected for this study. The reason for selecting only one branch is because, operations of each bank is usually the same across all their branches (Ibidunni, Osibanjo, Adeniji, Salau & Falola, 2016). This is guided by the fact that each bank operates by a unique set of culture and philosophy which spans across all their outlets/branches nationwide. A sample size is 200 was determined for this study, using Yamane’s (1967) formula for determining sample size. The Multifactor Leadership Questionnaire (MLQ) developed by Bass (1995) was used to measure leadership styles with a 5 point Likert scale ranging from Strongly Agree (SA) to Strongly Disagree (SD) was administered to the respondent to measure organizational commitment. Items measuring organizational commitment were adopted from Allen & Meyer (1990).

Reliability and Validity of Constructs

The Cronbach’s alpha reliability and construct validity of this study was ensured using factor analysis. Table 1 reflects the details.

This study was carried out to establish the relationship between the task-trait leadership orientation and employee commitment. It also investigated the interacting role of organizational climate in that relationship. Utilizing responses from 167 respondents in Nigeria’s banking industry, the study concludes that managers’ leadership orientation can be viewed from either the task orientation, which is strongly tied to their commitment to the organization and the structure that governs it or the trait orientation which derives from the personality of the leader. The study also concludes that managers should focus on the influence of leadership quality and organizational processes because they are significant to enhancing both the task oriented and the trait oriented leadership styles.

We wish to express our sincere appreciation to the Management of Covenant University for giving full sponsorship to publish the research work in this journal.