Hofstede defined Power Distance to be, ‘the extent to which the less powerful members of institutions and organisations within a country expect and accept that power is distributed unequally’ (geert-hofstede.com). Hofstede showed differently across cultures on power distance index on his https://www.geert-hofstede.com. Table 1 shows part of it. The majority of Western countries, except France (score 68) United States, United Kingdom, Germany and Netherlands have a low power distance index. Meanwhile, the majority of Asian countries, such as Japan, China, South Korea, India and Turkey have a high power distance index. Likewise, ASEAN countries, such as Indonesia, Malaysia, Singapore, Philippines and Thailand have a high power distance.

Locke (1969); Hartline & Ferrell (1996) defines job satisfaction as, ‘the pleasurable emotional state resulting from the appraisal of one's job as achieving or facilitating the achievement of one's job values.’ Hauff & Richter (2015) stated that the relation of job characteristics with status and power are perceived to be different among different cultures and moreover, that job characteristics include: Income, advancement, job security, interesting job, independent work, qualification possibilities, opportunities for skills use, low workload, good relationships with management, good relationships with colleagues, opportunities to help others, usefulness to society and work-family compatibility.

Employee participation implies their input on organisation values and recognises their contribution to achieving company goals. Participation in decision-making provides employees with more opportunities to utilise their human capital (Park, 2015). Favourable opportunities for rewards, such as financial incentives and a positive valuation of employees’ contributions are involved (Park, 2015). When employees have opportunities to participate in decision-making or financial results, they will interpret these organisational actions to be indicative of the company’s commitment to them (Allen et al., 2003; Eisenberger et al., 2001; Rhoades & Eisenberger, 2002; Park, 2015). 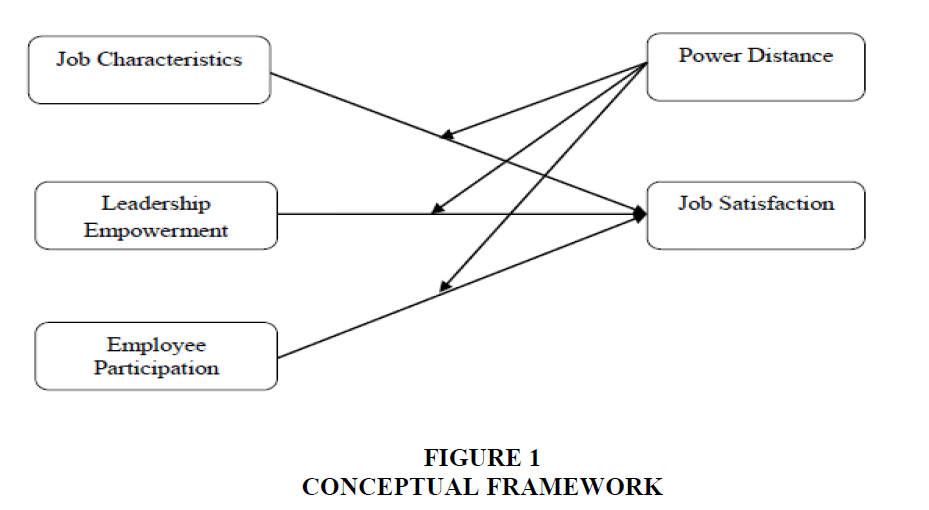 Furthermore, based on the above conceptual framework, it will be important to investigate it with empirical evidence. Here, a measurements scale can be used for research questionnairesin order to investigate by empirical data of the conceptual framework. The job characteristic scale can be adapted from Fock et al. (2013), the leadership empowerment scale can use Spreitzer’s (1996), employee participation can be measured by two items adapted from Park (2015), job satisfaction can be measured by two items adapted by Hartline & Ferrell (1996) from Brown & Peterson (1993) and power distance can be assessed using an 11-item scale developed by Brockner et al. (2001). Table 2 shows the constructs and measurements scale.

Firstly, future research should include the phenomena gap of international trade and capital internationalization activities in the era of globalization creating the complexity of business and corporate management. Culture is one of the main factors that create the complexity. The reality shows the importance of cross cultural knowledge in the management of people in the global management. Understanding country by country differences regarding the power distance dimension of culture, is one example. Specifically, Western culture with its low power distance and Eastern culture with its high power distance culture is important. The scores from conducting a comparison will influence success in human resource management in each country.

Secondly, theory gaps between the theory and future research can be explored. According to Thomas et al. (2004), job characteristics are the primary determinants of job satisfaction and this issue has become a longstanding debate between psychologists (such as Kulik, Oldham & Hackman, 1987; O'Reilly & Roberts, 1975). But according to Hauff & Richter (2015), people from across cultures perceive job characteristics differently as they are related to status and power. Therefore, these factors are important for job motivation and employee satisfaction in accounting for differences across cultures.

According to Monahan (2013), job satisfaction is “an employee’s affective reactions to a job based on comparing actual outcomes with desired outcomes” and “when expectations are met or exceeded, employee job satisfaction is often high”. Monahan (2013) investigated the effect of Leader-Member-Exchange (LMX) on job satisfaction. The LMX is a leader’s relationship with each individual organizational member. Monahan proposed that the LMX will influence employee work satisfaction. Jutras & Mathieu (2016) also state that employee perception of one’s leader and organization may influence overall job satisfaction. Furthermore, Amundsen & Martinsen (2015) built the proposition effect of leadership empowerment on job satisfaction. But according to Fock et al. (2013), the real meaning of empowerment is popular in Western societies, but it puzzles managers in Eastern cultures and causes them to be uncertain about how to empower their subordinates.

Yang (2013) said that fair labour practices and continuous employee training and development can improve their job satisfaction. Park (2015) argued that when employees have opportunities to participate in decision-making, doing so will be indicative of the company’s commitment to them. It logically applies to the low power distance societies, but how does this apply in high power distance societies? Rafiei & Pourreza (2013) state that in high power distance cultures “their employees do not have the power of making decisions and are not allowed to participate in their organizational affaires”. As a result, my future research will investigate the moderating effect of power distance on the relationship between job characteristics, leadership empowerment and employee participation on Indonesian employee job satisfaction.

Thirdly, the research gaps exist between future research and previous research. For example, Hauff & Richter (2015) investigated the moderating effect of power distance on the relationship between job characteristics and job satisfaction and they focus on 16 nations that have different degrees of Hofstede’s power distance index. They found the following scores: Australia (score 36, R2 is 53 percent), Germany (score 35, R2 is 43 percent), Great Britain (score 35, R2 is 51 percent), USA (score 40, R2 is 46 percent), Hungary (score 46, R2 is 28 percent), Sweden (score 31, R2 is 51 percent), New Zealand (score 22, R2 is 50 percent), Canada (score 39, R2 is 50 percent), Philippines (score 94, R2 is 20 percent), Israel (score 13, R2 is 48 percent), Japan (score 54, R2 is 43 percent), Spain (score 57, R2 is 44 percent), France (score 68, R2 is 58 percent), Switzerland (score 34, R2 is 42 percent), Finland (score 33, R2 is 53 percent) and Taiwan (score 58, R2 is 37 percent). Hauff & Richter (2015) found there is a different R2 among nations with a high power distance index, i.e., between Philippines and Taiwan (less than 40 percent) and Japan, Spain and France (more than 40 percent). Indonesia and the Philippines are country members of ASEAN and have high power distance index. Hauff & Richter (2015) found that for employees from the Philippines, low workload is most important for job satisfaction. It is interesting to investigate the moderating effect of power distance on the relationship between job characteristics and job satisfaction with its high score for the dimension.

But although Indonesia people accept power hierarchy, they want wise implementation from those people in the power hierarchy. A leader in Indonesia is expected to accept subordinates’ participation and still perceive his authority in directive form and with resolute decision making (Panggabean et al., 2014). There is difference between regarding a leader as the most powerful man and the most respected man. Indonesian society expects the most respect to be given rather than perception that leaders are the most powerful. In other words, respect and deference to a leader is more important than attitudes about power. Tepa slira is an idiom of Javanese that means to empathize, which must be given by leaders. The superior should empathize (tepa slira) with the inferior. Tepa slira, literally, to measure against oneself, means to judge, from what one’s own reactions would be in a similar case if the positions were reversed, how one’s deeds will affect others. A leader must be able to be a bapak, a father and reliable patron, who should be honoured and followed, with every whim and wish being a command and who care for his subjects (anak buah). And this image of social organization is rooted in the family and is projected onto society as a whole (Mulder, 2005). Referring to the culture of a country will support the hypothesis of the moderating effect of power distance on the relationship between employee participation and job satisfaction. So it is interesting to investigate the moderating effect of power distance on the relationship between leadership empowerment and job satisfaction as in the Indonesian case.

Rafiei & Pourreza (2013) investigated the moderating effect of power distance on the relationship between employee participation and job satisfaction in Tehran, Iran. Employees and managers of hospitals affiliated with Tehran University of Medical Sciences were their respondents. Iran has high scores of Hofstede’s power distance index (58) and one of their findings is that power distance had a significant effect on the relationship between employee participation and job satisfaction. Iran and Indonesia both have high scores of Hofstede’s power distance index. But Indonesian is unique. For Indonesia, respect to the leader has the purpose to preserve social order and harmony. Indonesians cannot accept an authoritarian leader. Order is created, in the Javanese worldview, if people live in harmony by knowing each other’s position and duties, respect to ones who have a higher position and favour and being responsible for ones who have a lower position. They need one another. Social order must be preserved by recognizing their own position in maintaining social harmony and loyalty. For example, in Pewayangan or shadow play, Semar is a figure who is much respected, but he just is leader of servants (Punakawan) of Pandawa. Pandawa is the protagonist five princes in the shadow play story. As a servant of Pandawa, Semar (as well as the other servants, Gareng, Petruk & Bagong) is a loyal servant. He serves their lords, but in many events he also becomes a counsellor for his princes. His princes very much respect him because they regard him as a panutan or patron, one who is nearer god. So we look to cultural storytelling to see that hierarchy structure is complex in Japanese culture (Darmaputera, 1997). Kompas, a popular newspaper in Indonesia, cited a survey report of Burson-Marsteller and reporting that 75 percent of the public regard the president or government leader to the most powerful people in the society, but just 49 percent regards the president as the most respected man. Corporate CEOs are not regarded as the most powerful men and they regard religious leaders to be more respected than president (Kompas.com, 2014). Self-control, beauty and elegance, politeness and sensitivity are keys of leader authority (Panggabean et al., 2014). It is interesting to investigate the moderating effect of power distance on the relationship between employee participation and job satisfaction as in the Indonesian case.

Finally, the above phenomena gaps, theory and research gaps can be the basis of future research. Investigations can focus on the moderating effect of power distance on the relationship between job characteristics, leadership empowerment, employee participation and job satisfaction.

Monahan, K. (2013). What do values have to do with it? An exploration into the moderating impact of work values on the relationship between leader-member-exchange and work satisfaction. Academy of Strategic Management Journal, 12(1), 95-111.

Rafiei, S. & Pourreza, A. (2013). The moderating role of power distance on the relationship between employee participation and outcome variables. International Journal of Health Policy and Management, 1(1), 79-83.