In today's world, important economic changes are taking place, related to the intensification of the accumulation and usage of intellectual capital.

The Analysis of Recent Research and Publications

The choice of priorities for scientific, technological and innovation policy should be based on the analysis of global directions of technical and economic dynamics, as well as the prerequisites for the formation of competitive advantages in entrepreneurial activity. Nowadays, as the formation of a new economy type in a number of countries takes on a new character, the main feature of the global economic is the change in the dominant type of capital and the nature of labor, they mostly from the types of intellectual capital of business structures (Acs et al. 2016).

5. Branded capital - trademarks, trademarks, corporate brand (name), service brands. The image of the entrepreneur or his business reputation can be classified in this category (Watson & Stanworth, 2006). 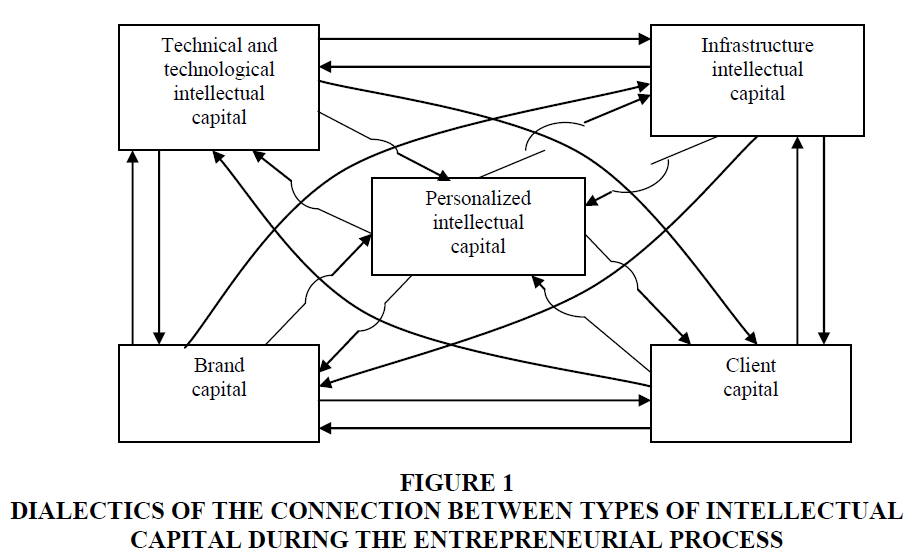 We propose to consider the following methodological approach to assessing the effectiveness of intellectual capital formation in business sphere. In order to evaluate comprehensively the effectiveness of the formation process of this resource, we have introduced three levels of entrepreneurial intellectual capital: high, average and below average. Let`s suppose Ki (i=1 ..., m) – a system of indicators that characterize the entrepreneur intellectual capital; Ki – the barrier normalized value of the indicator corresponding to the average level of intelligence of the entrepreneur. Change of values xi of the intelligence indicator Ki is carried out in the range o ≤ xi ≤ 1 and these values are determined by the following ratios: 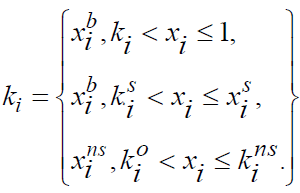 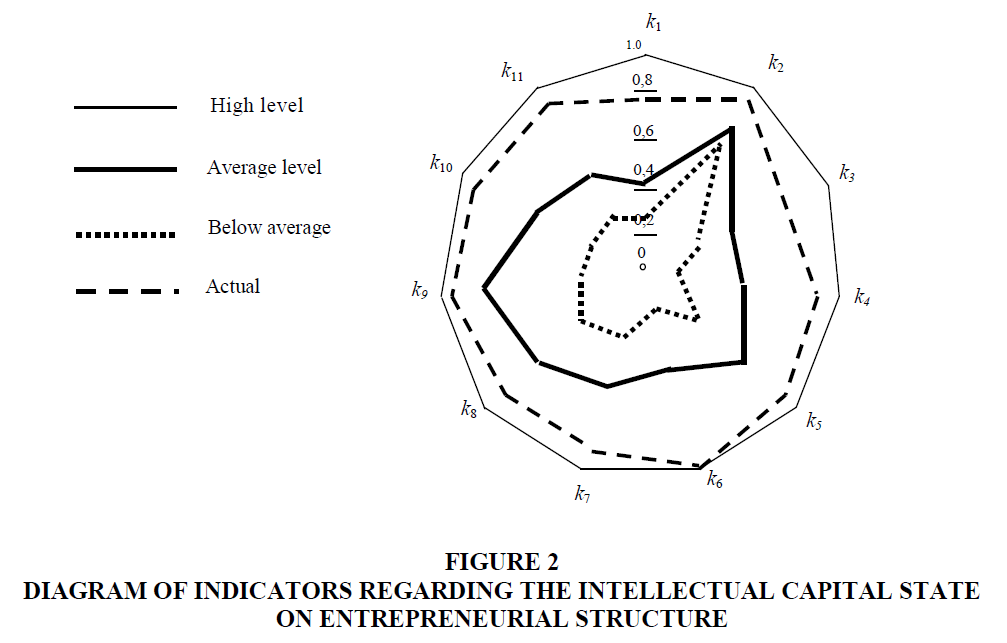 Graphical interpretation of the indicative analysis results regarding economic concepts, estimates, and calculations in practice contributes to a better perception and acceleration of obtaining both quantitative and qualitative values of indicators, which, in turn, plays an important role in the visual, operational, complex comprehensive assessment of the coherence of various factors that determine the status and prospects of the entrepreneur development.

The graph contains a lot of information, but its main advantage is that it gives a complete picture of the situation at the enterprise. The graph describes not only the current state of the entrepreneur, but also indicates the orientation of its development strategy. By having similar data on competing or related companies, you are able to compare yourself with others and evaluate your strengths and weaknesses, compare and match your capabilities with the capabilities of other companies. Also, by creating dynamics over the years, you can compare the status of the entrepreneur, as well as analyze the progressing or degrading entrepreneur is, identify and parry dangerous deviations from the normal condition.

As an example of assessing the intellectual level, we propose to consider a certain business entity, whose activity is characterized by a certain system of indicators (Table 1).

Each company must independently define its system of indicators for calculating intellectual potential and defining the strategy of development, due to the specifics of its activity and the individuality of the personnel organization. For the purpose of sustainable development, in the self-interest of the entrepreneur and sometimes for the sake of survival, it is necessary to be able to give self-esteem to the own potential and, first of all, to the intellectual potential, what is more, to compare its possibilities with the needs of the market (Ramezan, 2011; Tatiana et al., 2018).

While noting the uniqueness of this approach, we should highlight its positive aspects, such as complexity and clarity. At the same time, it is necessary to point out the following significant disadvantages. First, the use of expert polling method to assess intellectual capital is quite subjective, secondly, the indicators used for the assessment (Table 1) are of different nature and their significance in the complex assessment varies, moreover, the list of indicators does not reflect the objective picture of the intellectual capital usage on the enterprise Third, the adoption of a complex indicator of the polygon area (Figure 2) cannot reflect the adequate state of intellectual capital and the efficiency of its usage, since the indicators and, respectively, the sides of the polygon are not comparable.

An important methodological issue regarding the creation of a system for assessing the efficiency of the entrepreneur's intellectual capital formation is to change approaches in the perception of R&D costs from spending to investment. Comparison of data is extremely important for evaluating the efficiency of the intellectual capital formation obtained in the entrepreneurial environment (as a result of the mentioned indicators calculation) not only during the previous period, but also with similar indicators in the external environment.

Comparison of the results obtained by a certain entrepreneurial unit with similar indicators of competitors allows evaluating the efficiency level of the intellectual capital formation from the point of view of its socially necessary level.

It was proved that the effectiveness assessment regarding the formation of intellectual capital is basic for making appropriate commercial decisions and ensuring the process of self-regulation of the organizational and economic mechanism, also, it allows to influence effectively the current state and tendencies of the intellectual capital development, what is more, to set directions and scope of entrepreneurial actions and initiatives. Assessing the formation effectiveness of the personalized intellectual capital is a fundamental element of the overall evaluation system. In this aspect, we propose a system a system of performance indicators for the formation of personalized intellectual capital, which involves directing the entrepreneur to an intensive way of development and achieving a high level of efficiency in dynamics. It was determined that client capital is manifested through a steady positive attitude of clients to the entrepreneur and (or) its products, which is a means of generating additional income, also, it gives additional advantages in the market, on the basis of which a system of efficiency estimation of client capital formation is developed, which allows to carry out complex assessment regarding the current state of client capital.