Reward System: A Strategy for Academics Job Satisfaction and Retention

The reward systems are significant factors for employee satisfaction. Reward systems addresses the needs of workers, strengthens the relationship between the employee and the employer. Employees are valuable assets in any organization and expect to get rewarded for the job done. The survey method was employed in carrying out this research. A total of 200 academics’ were selected from Covenant University. The stratified sampling was used to distribute 200 copies of questionnaire among lecturers in four colleges in the university and 176 copies of questionnaire were adjudged usable for this research. Data collected was analysed using descriptive statistics on the Statistical Package for Social Sciences (SPSS) version 23. The study revealed that reward takes different forms and majority of the academics are not satisfied with the rewards system in the university. The study recommends that university management should pay attention to improving the reward system available so as to increase productivity and efficiency among academics.

The level of commitment of an employee to any organization is strongly linked to the level of satisfaction of such employee, and job satisfaction is derived from the rewards employees get from their employers. Job satisfaction is the degree to which employees are satisfied with their jobs, and the performance increases remotely when an employee is satisfied (Ngwa et al., 2019). Additional factors impacting employee job satisfaction include career growth, accomplishment, financial stability, self-esteem and a sense of belonging. If employees are pleased with the consequence of these variables, then they are satisfied with their jobs. If they are only moderately content, they are only satisfied with certain parts of their jobs or they are not at all satisfied with their jobs, which in turn would significantly affect the growth of every organization. Job satisfaction is founded on the idea that the happiest worker is the most efficient. Greenberg & Baron (2008) assert that job satisfaction has a positive or negative impact on one's work responsibilities. The degree to which workers are satisfied with their work influences how efficient an organization is. Therefore, employees need to be satisfied and committed to their jobs through various ways which include strong and effective motivation. Motivation is a psychological state. Human needs are insatiable but these needs can to a large extent be covered. In an organizational context, when these needs are not met, they are demonstrated in the employees’ behavior, employers must create a suitable environment in which motivation can take place. However, Elton Mayo, a prominent expert in the human relation approach, argues that employers need to be mindful of these 'social needs' and ensure that employees cooperate with the official organization instead of operating toward it., therefore humans should be seen as humans and not machines ensuring that productivity can also be achieved.

Reward and compensation have been noted as major factors that affect job satisfaction of employees in many organizations. Angima & Mwangi (2017) asserted that salary and compensation are important factors affecting job satisfaction of employees since they strengthened a positive emotional state. Job satisfaction is positively related to the degree to which one's personal interests are achieved in the work position. Employees place a high premium on jobs that offer rewards such as a sense of accomplishment, variety challenge, and individual development. Organizations should modify current positions so they can have features or results that are inherently rewarding for employees.

Armstrong's (2006) stated that rewards system consists of the integrated strategies, procedures and activities of a company to reward its workers in accordance with their commitment, ability and skills. Reward is extrinsically or inherently enhanced to preserve and enhance the conduct of employees in an organization. Reward is earned by an employee from an employer for the exchange of the employee's service or as a return for the work performed. Bau & Dowling (2007) noted examples that can be used to reward employee accomplishments, such as a fixed base wage, variable allowance and employee stock ownership plans. In addition, rewards can take financial and also non-financial forms such as recognition, empowerment etc.

It has been argued that intrinsic rewards originate from the content of the work itself and include enhanced performance-oriented variables such as: interesting and challenging work, self-direction and accountability, variety, imagination, ability to use one's skills and abilities and appropriate input on the effectiveness of one's effort. Intrinsic rewards are defined by Mahaney & Lederer (2006) to include performance-related incentives such as encouragement from co-workers and immediate bosses, appreciation of management for well-performed work tasks, status in the workplace.

Intrinsic or non-financial rewards are very important for stimulating improved effort and efficiency, according to Chiang & Birtch (2008), as they profoundly contribute to creating a positive impression in the employee's mind of the degree to which he or she sees the organization as helping and caring. Mahaney & Lederer (2006) also emphasized the importance of intrinsic rewards to include the stimulation of employee motivation towards work; an action argued to be influenced by several factors such as the level of pride one attaches to their job, the level of fun or joy derived from work, the belief that one's effort contributed to the group, department and organization's success.

In the other hand, extrinsic incentives are external to the work itself. Elements such as salaries, fringe benefits, job security, promotions, private office space, and the social environment provide financial or tangible incentives (Hafiza et al., 2011). Competitive wages, wage increases, merit awards and other indirect forms of payment as compensatory time off are further examples (Mahaney & Lederer, 2006). One of the oldest techniques implemented by business organizations to increase the productivity of workers is to pay a salary premium to workers, a wage that is above the wage paid for equivalent labor by other businesses.

A wage premium will improve efficiency by improving morale, fostering greater dedication to firm objectives, minimizing turnover and motivating. As a result people are often drawn to well-paid job, increase additional attempts to undertake tasks that get them more pay, and become dissatisfied if their pay is threatened or diminished. Extrinsic incentives shows that the organization values the contribution of employees.

Galanou et al. (2010) argues that job satisfaction is a very important aspect of human resource management as it affects the relationships between various work cultures, goals and rewards affecting their employees. The more satisfied employees are, the less likely they are to leave their jobs, the lower rates of absenteeism and the greater productivity they have. This is relevant because employers are now opting for actions that will make employees more satisfied and thus more productive (Galanou et al., 2010).

These suggest that satisfied employees are the best tool that can assist any organization in achieving its desired objectives (Özutku, 2012; Jiang et al., 2006; Hedge & Borman, 2012).

Increased level of employees’ job satisfaction often results in increase profitability of an organization. These would allow employers to be more willing and able to increase their employees' wages, salaries and benefits. The provision of reward system increases employees’ commitment to the organization. When employees are satisfied with their roles, they would be more likely to put extra time into working for the good of the whole organization. High job satisfaction will result in a series of positive results.

In organizational research, the word absenteeism is defined by the non-attendance of workers when they are supposed to attend scheduled work. Absenteeism has been aptly called the common cold of problems with organizations.

Patrice (2017) suggested that employees could support unions in expressing negative attitudes to the workplace. Employees who are more or less dissatisfied with their work in one way or the other are likely to enter a union to demonstrate such unhappiness. That is to say, it is not being unionized that makes employees less satisfied, it is being disappointed with an organization which makes one more likely to enter a union. The employees enter the unions because they believe they cannot make changes directly that will reduce the causes of job dissatisfaction. The extent of union operations has to do with job dissatisfaction. A low level dissatisfaction will only result in protests whereas higher rates of dissatisfaction will result in attacks on employees.

Relationship between Rewards and Job Satisfaction

Recent studies suggest that the job satisfaction of employees is highly influenced by the various types of rewards of the organizations. A research conducted reveals that employees tend to be more satisfied with jobs when rewards suit their needs. In addition, both the intrinsic and extrinsic rewards that an employee receives are essential predictors of job satisfaction.

Consequently, having appropriate rewards has a strong association with the morale and job satisfaction of employees. Rewards are strong job satisfaction determinants (Bustamam et al., 2014).

The survey method was employed in carrying out this research. The study population consist of academics in Covenant University. A total number of 200 respondents were considered for this study. The multistage sampling method was employed. The stratified sampling was used to distribute 200 copies of questionnaire among lecturers the four colleges in the university and 176 copies of questionnaire were adjudge usable for this research. They include College of Science and Technology (CST) with 169 lecturers, College of Business and Social Sciences (CBSS) with 127 lecturers, College of Engineering (COE) with 131 lecturers and College of Leadership and Development Studies (CLDS) with 52 lecturers. Data collected was analysed using descriptive statistics on the Statistical Package for Social Sciences (SPSS) version 23. Results were presented in frequencies, tables, percentages and charts.

Table 2 shows that a majority 63.1% of Covenant University lecturers are aware about the university’s reward system with only 36.9% ignorant of such provision. Nevertheless, 70.5% of the lecturers do not find the reward system attractive (Figure 1). 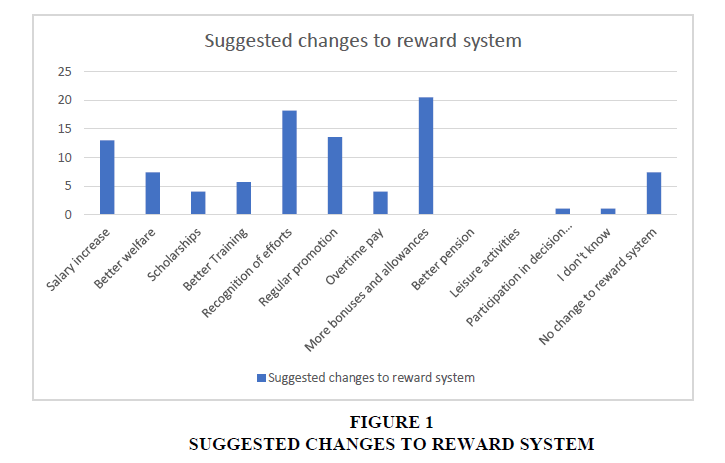 Table 3 shows that getting bonuses and allowances 20.5% is very important. Such allowances include travel, vacation; leave (especially maternity) allowances. It is the most considered among the other areas of improvement to the reward system noted by respondents. This is followed by the 18.2% who consider seeing their efforts and research recognized as more important. This is seen to boost their morale to work more and better. Salary increase is also not left out as 13% respondents see it as an area for necessary upgrade in the reward system.

The study revealed that reward could take different forms and is vital in ensuring job satisfaction among academics. There are reward systems available in the university but the academics are not satisfied with them. Majority of the academics suggested increase in salary, recognition for research and staff efforts regularly, fair promotion, bonuses and allowances amongst others. Employees are less motivated when they are not adequately rewarded or when the reward they get is not commensurate for the job done. This study recommends that the university management should make rewards system commensurate and available to academics’.

Chiang, F.F., & Birtch, T.A. (2008). Achieving task and extra-task-related behaviors: A case of gender and position differences in the perceived role of rewards in the hotel industry. International Journal of Hospitality Management, 27(4), 491-503.