The problems of gender education in its modern interpretation have practically been built in the context of the Soviet implementation of the women’s issue, the creation of institutional conditions for the legal equality of men and women in all spheres of public life, including in education. Proceeding from this, the posed problems are topical. The main goal of the work is to study the Soviet transformation of gender in post-war Kazakhstan. To achieve this goal, the authors used various methods of historical interpretation of sources, historical and chronological, comparative and historical, generalization and systematization. This made it possible to concretize the study. As a result, the historical experience of setting and solving issues of women’s education was analysed. Also, a large factual material was put into scientific circulation. The authors presented a modern interpretation of the understanding of the state policy nature regarding the educational level of women. It was also established that public policy played an important role in the education of women.

Understanding of the historical experience of setting and solving the issues of women’s education allows building up new modern educational models taking into account gender approaches. In this regard, it seems relevant to address the issue of gender and educational components of the Kazakhstani modernization of Soviet society in the post-war stage of its development. As is known, the post-war policy of the Soviet power was based on ideological foundations, in the context of which women were viewed as the most important economic and social resource of social development.

The importance of the educational level of the female population in the overall strategy of power prompted society to address the issues of compulsory and universal education. A distinctive feature of the educational policy of 40-50s of the XX century consisted in the involvement and coverage of all categories of the female population with various forms of training, stimulating the vocational guidance of women, and developing their demand for professional activities (Scientific and Analytical Review, 1992).

Therefore, the main task of the work is to study, from the perspective of the modern level of historical science, the issues of women’s education in the post-war period, the issues of training specialists among women, the formation of a number of scientific and pedagogical cadres of the higher school of Soviet Kazakhstan. The authors believe that the representatively of women in the academic staff of higher education is one of the significant qualitative indicators of the realization of their educational opportunities, professional growth and development.

The degree of study of the women’s status in the system of higher education and science of Kazakhstan in the period from 1946-1965 problems is determined by the range of works on women’s history, special works on the history of the development of education, science, culture. The well-known authors of the studies of the Soviet decision on the women’s issue were Bilshay & Chirkov, whose conceptual position was distinguished by ideological orientation (Bilshay, 1959). The works of Tatybekova (Kirghizia), Aminova (Uzbekistan), Arykova (Kazakhstan), etc., were dedicated to the study of national specifics of women’s issue solution in the USSR (Tatybekova, 1967; Aminova, 1975; and Arykova, 1930). A group of studies revealing the advantages of socialism in the emancipation of women in Kazakhstan, ways and methods of solving problems of women’s education is represented by the works of Kozgambayeva (1968), Sadvakasova (1969), Zhakipova (1971) & Kunantayeva (1978).

A group of studies that address the issue of the relationship between gender-education components of social development is presented by the works of such modern Russian (Zdravomyslova, 1999; Balgozina, 2006; Khasbolatova, 2005; and Temkina, 1996). The scientific works of Samakova, Solovyova, Altynbekova and Andirzhanova on gender policy, equality and political advancement of women should also be attributed to this group (Samakova, 2004; Soloviyova, 1999; Altynbekova, 2001; and Andirzhanova, 2004).

In the post-war period, the priority of the education’s economic function was due to the growing need for specialists in the spheres of economy and culture. In the 1945-1946 school years, in the schools of the Ministry of Education of the Republic, the teaching corps consisted of 36,154 people, including women-22,639. Out of the 37,523 teachers on January 1, 1946, only 17.5% had higher education and 28% had secondary pedagogical (Central State Archive of the Republic of Kazakhstan). The war exacerbated the difficulties of schooling; the state of schools was characterized by a weak material base, a decrease in the number of students by 30%, teachers by 14% (Akhmedova, 1960; and Sulyagina, 2013). In subsequent years, work continued in this direction. So, in 1952, 142 Kazaks were studying in the boarding schools in 8-11 grades in the Akmolinsk region (CSA RK D.2201.L.3, 5, 7). In 1946-1947 academic year, 4,932 students were studying in magisterial and pedagogical institutions of the republic, 3,211 of them were women, including 902 Kazaks (Archive of the President).

In 1952, the Soviet leadership of the republic made a special decision to improve the education and upbringing of Kazaks in schools, secondary specialized and higher educational institutions, which played an important role in the development of women’s education (Kunantayeva, 1980). For example, in 1953 the number of universities’ graduates was 17,926, 10,323 of which were women, including 2,063 of Kazakh nationality (CSA RK F.1692, D.2331, Op.1, L.49, 58, 59). The number of female teachers in educational institutions in 1950 was not too high (Figure 1). 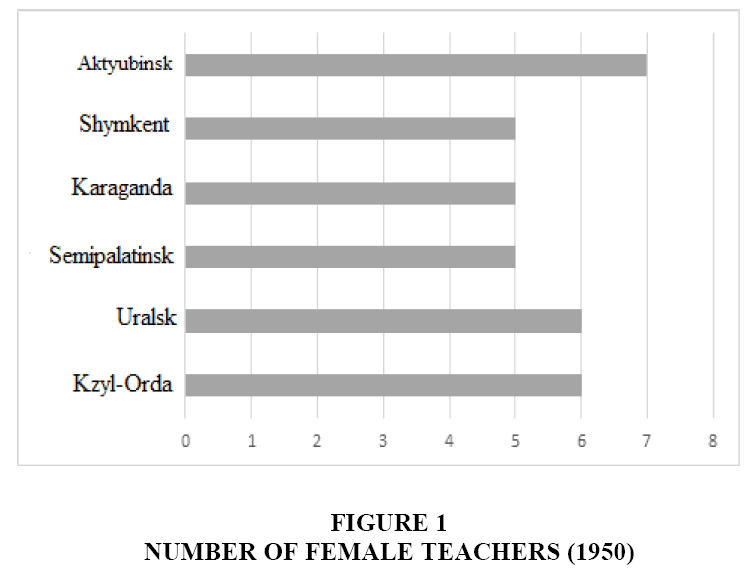 So, in 1951, 220 women, including 70 Kazaks, were already studying at the institute of post-graduate education of the republic (Shayakhmetov, 1951; and Beysenova, 1953). The specific data are presented in Figure 2. One of the tools for social adaptation of the indigenous population to the realities of Soviet actuality in the context of the large-scale Russification policy was the mastery of the Russian language (Sydykov, 1998). 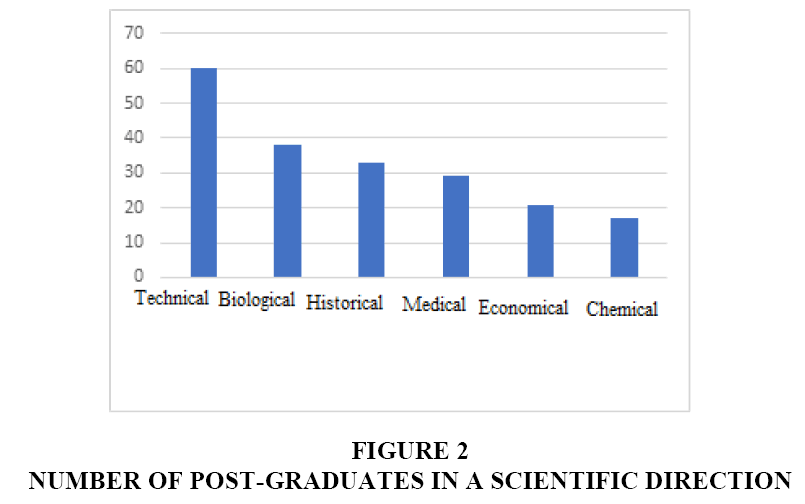 Figure 2: Number of Post-Graduates in a Scientific Direction

The above mentioned allows us to recognize that the level of gender relations development in the society influences the formation of the professional career of all women of the republic, including their promotion on the scientific and pedagogical ladder. As a result of our research, it was revealed that Kazakh women, who did not yet have a high level of professional training and, as a consequence, were not subject to wide involvement in scientific and production activities, were limited in access to managerial positions. Soviet policy used the institutional opportunities of gender as an ideological means of politics; the universal “style” of solving the “female” issue, the use of administrative methods by the state to solve it directly affected the female half of the population of Kazakhstan.

Modern changes in the world and public consciousness create prerequisites for a rethinking of the past, for studying its separate periods on a regional and national scale, different sides and aspects of social and political life. The Soviet modernization of the society, which continued in the post-war period, formed a certain cultural and educational environment for the further development of the women’s resource potential of society, overcoming gender disparities in the Institute of Education and Science.

Aminova, R.K. (1975). October and the solution of the women's issue in Uzbekistan. Tashkent: Publishing house “FAN”.

Karpykova, S.S. (1997). Women of Kazakhstan: The problems of historiography (20-80s of the XX century). A thesis for a Doctor’s of Historical Sciences degree. Almaty: Nauka.

Kozgambayeva, M. (1968). From the history of women's education in Kazakhstan. Alma-Ata: Publishing house is a jubilee, comiss. 10th Anniversary of Kazakhstan.

Samakova, A.B. (2004). Gender policy in the context of social transformation of Kazakhstani society. Diss. of the Cand. of Polit. Sciences. Almaty.

Shayakhmetov, Z. (1951). About shortcomings and tasks of ideological work in party organizations of the republic. Bolshevik of Kazakhstan, 7, 12.

Sydykov, Y.B. (1998). Russian-Kazakh relations at the stage of formation of the totalitarian system. Almaty: Master.

Tatybekova, Z. (1967). Women of soviet Kyrgyzstan in the struggle for socialism and communism. Frunze: Ilim.

The Congress of the Communist Party (Bolsheviks) of Kazakhstan. Work among women. (1952). The Bolshevik of Kazakhstan, 1, 59.

Zhakipova, A. (1971). Development of family-marriage relations in Kazakhstan. Alma-Ata: Kazakhstan.