Strategic and Innovative Teaching Approach Based on Mental Imagery

Purpose: The aim of this study is to review the potential application of teaching aid in reading 29 Arabic letters with Fatha vowel using a strategic teaching approach based on mental imagery techniques. Imagery strategies are said to be effective to improve memory and mastery in reading skills.

Design: This study is designed to review a strategic development of a teaching material of the Arabic Vowel Fatha Reading Aid in the teaching of Arabic reading skills for lower-level grades students using ADDIE (Analyze, Design, Develop, Implement and Evaluate) Instructional Model. The methodology of this paper consists four steps: The first step consists analyzing the main cause of students’ weaknesses in reading Arabic text. The second step consists designing the characteristics of material to be taken into account in building an effective teaching aid. The third step consists the process in developing the material and the last step consists implementing and evaluating the effectiveness of usage in teaching and learning Arabic. A total of 20 students from Year 1 were exposed to the intervention using the charts that are designed graphically using picture icons which resemble certain Hija'iyyah Alphabets for 7 weeks with a focus on 4-5 letters per week.

Findings: A significant result obtained from pre and post-test using T-test analysis proved that the strategic use of this technique is potentially an alternative method to overcome the problem of reading Arabic Hijaiyyah letter of Fatha lined vowels.

Implication: This innovative teaching aid and teaching technique has a great potential to be used in the Arabic Education subject to enhance students’ ability in reading skills. This material hopefully can be useful in helping pupils who are low-achievers in teaching and learning Arabic Language, Tasmik activities (Iqra 'reading guidance) and Quran Literacy Camp (Quranic recovery program) which is being implemented under the j-QAF program.

The scenario now shows that many Muslim students still could not pronounce and read the single Hijaiyyah letters containing the Fatha vowels and other various lines. Some scholars identify, the causes for this problem are related to the disadvantages of teacher’s teaching approaches and teaching materials which contribute to the teaching reading the Hijaiyyah letter to be less interesting and difficult (Noh & Tarmizi, 2009; Jusoh, 2013). Therefore, a strategic and innovative teaching approach is essential to be implemented in teaching and learning session to overcome these problems.

The use of imagery techniques has been widely discussed from various angles over the past decades in the issue of language proficiency in terms of grammar teaching, vocabulary learning, reading, writing, listening and comprehension aspects. These past studies have used various methods based on imagery approaches using illustrations and imaginations to enhance the mastery of second language learners (Dörnyei & Chan, 2013; Gerngross et al., 2006; Green, 2009; Cohen, 1987; Wright & Hill, 2008; Center et al., 1999).

Imagery technique is a technique that uses mental imagery to increase the ability to memorize and build relationships and conclusions with what you want to learn (Sadoski, 2014). In this regard, an innovation of auxiliary materials was developed to troubleshoot the problem of recognizing and reading the Arabic Hijaiyyah Letters of Fatha by using approaches and techniques of imagery.

The objective of this study was to review a strategic development of a teaching material of the Arabic Vowel Fatha Reading Aid in the teaching of Arabic reading skills for lower-level grades students.

There are several of instructional models that can be set in a teaching and learning aid that we want to develop. ASSURE Model, Product Orientation Model, Dick and Carrey Teaching Design Model and ADDIE Model are examples of models that can be applied. In order to construct this material, the researcher has chosen the ADDIE design model to be applied as guidance to make sure it’s systematic and strategic development.

ADDIE instructional model is a teaching design model which is focused on product orientation. It became the basis for the other designs of instructional models. ADDIE is an abbreviation of the words-Analysis, Design, Development, Implementation and Evaluation. But this study is only focused on three phases which are Analysis, Design and Development. The other two phases should be carried out in further studies. Figure 1 below shows the workflow under the ADDIE concept. 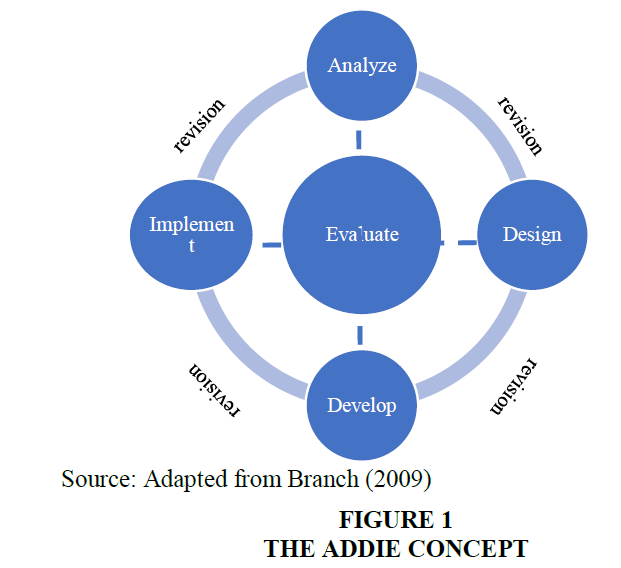 The main cause of students' weaknesses in the early stages of reading Arabic texts is because of the difficulty in identifying and distinguishing similar Arabic letters in most of its letters, student memory problems, teaching methods and teaching materials that are less interesting.

Strategic teaching approach using imagery technique is believed to successfully provide concrete experiences to students. According to Jean Piaget's Cognitive Learning Theory, these low-level grades children can solve problems involving concrete objects (things that can be seen or touched) and use much of the existing experiences in understanding the new experience (Piaget, 1964).

Mental imagery is defined as a process or event when individuals perceive a particular object, event or atmosphere, whereas the object, event and atmosphere are in fact not present at the time of the mental depiction process applies to the brain. It was born of a retrieval process of visual objects, events seen in the past and past experiences (Richardson, 2013). This memory technique was based on the Atkinson & Shriffin Information Processing Model and the Paivio Dual-Coding Theory since 1971 (Atkinson & Shiffrin, 1968; Clark, J.M., & Paivio, 1991).

The imagery approach used in the field of education, especially in the learning of second language and foreign languages, is called mnemonic technique (Clark & Paivio, 1991). The keyword technique as one of mnemonic techniques applied in the design of this Arabic Vowel Fatha Innovative Reading Aid because this technique builds a connection between the sound and an image to link the pronunciation of a foreign word that is not familiar with the learner's mother language.

The image network is built into the meaning of the foreign word in order to be easier to remember. The difference is that this innovation of the reading technique of Arabic Hijaiyyah is not related to the word pronunciation but the sound of the letter. This technique is found to be very effective for lower grades children, especially with the help of pictures as memory stimuli as they are still unable to generate their own imaginations and images in the memory store to build relationships between keywords and words (Atkinson, 1975; Clark & Paivio, 1991). Other than the technique applied, it was designed to be in the form of concrete materials to serve concrete experiences to students.

This material was developed in the form of charts and multi-purpose scratch cards as an alternative tool for teaching Arabic reading in the form of concrete materials. It is designed to overcome the problem of reading the 29 Fatha Arabic letters amongst the lower grades students in Arabic learning.

The imagery technique is applied in its graphical presentation when the picture icons resembling the writing forms of each Arabic Hijaiyyah Letters are displayed as a stimulus to the memory of the sounds of a few letters and the memory of the form of letters to facilitate the identification of the reading process. The use of the keyword method in this mnemonic approach is aimed at stimulating children’s brain cells and enhancing their cognitive development especially students who are visually intelligent-space to precipitate their memory and understanding.

This technique is based on the construction of a relationship between the Arabic lettering of the Fatha-lined vowels with an image of similarity with the letter and also the same as the prefix syllable pronunciation of the image name as stimulus object in the Malay language which is the mother language of Arabic learners in the context of Malaysia. This method creates a connection between the learned Fatha-lined Arabic vocabulary sounds which may be something strange and unusual to hear with their existing knowledge and experiences. According to Paivio (1980), little children face difficulty in generating effective interactive images when using the imagery approaches. Therefore, they need visual aid and visual support from teachers as stimulus.

For example, an image icon of a basket (means Bakul in Malay language) will be selected to represent the letter ب (Ba) for a matching form. Whereas the squid image (means Sotong in Malay language) represents the sound of letter ص (So) because of the approximate shape. Similarly, other letters are represented by a particular icon to help cognitive weak pupils in using the power of their imagination intelligence to distinguish and observe the differences in various shapes of the letters and to remember their pronunciation. This idea is based on the memory law expressed by Windura (2011) that we can much more memorize the picture easily than the writing.

However, not all of the sounds of Arabic Alphabet Hijaiyyah may be attributed to the initial syllable pronunciation of the name of an iconic object that has a similarity to its shape. Some references to the Hijaiyyah in this innovation are also associated with the natural sound of the environment. As an example, the sound of أ (A) is associated with the sound of a crow that opens its beak where the bird is perched on a tree trunk, and it becomes an icon of the letter. Therefore, when learning and teaching, pupils will be asked to imitate sound like crows. Another example, the letter ح (Ha) is illustrated with a dragon icon blowing fire. During the learning session, the pupil will be able to imitate the style of the dragon is blowing fire from his mouth.

The use of the iconic approach has existed in the history of the use of writing systems during early human civilization in the ancient Egyptian society that used a pictogram of images or symbols that resembled a real object, a phonogram of symbols representing a sound or word and a semantic symbol that defined the specific meaning. This writing system is known as the hieroglyphs as shown in Table 1.

However, the modifications made in the innovation of the so-called InRA-Imagine and Read Arabic is that if the hieroglyphic writing system used by the Egyptians and the nations in the world in the early part of human civilization is based on their native tongue, Arabic, this innovation is linking iconic images into the native language of Malaysian students, namely Malay.

In the construction of these auxiliary materials, charts and flash cards are built on both front and back sides. Behind each parable of the letters are also included instruction questions as

suggestions to be used by teachers in order to encourage and guide pupils' imagination so that they can associate the picture icons with the Arabic alphabetic Fatha-lined vowels taught (see Figure 2). This part of the graph is called as The Guidance. 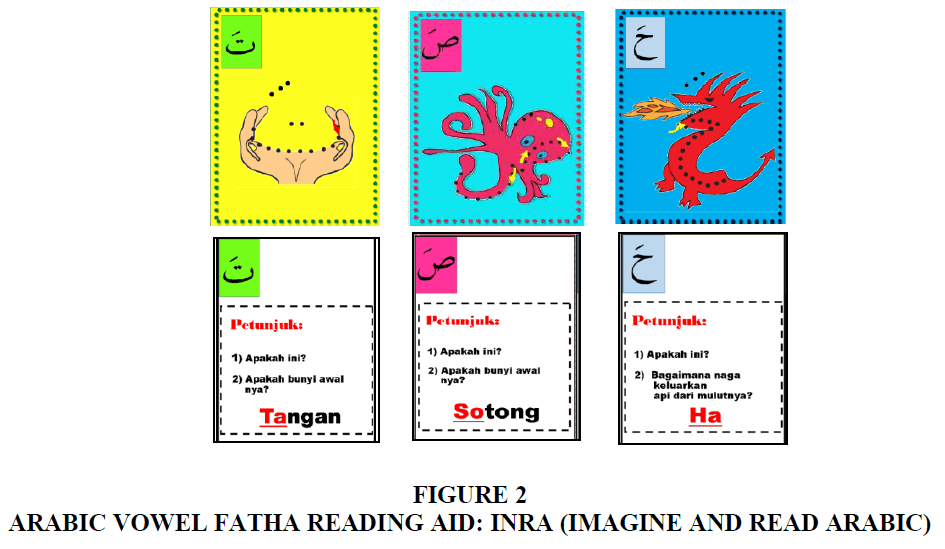 The effectiveness of the InRA reading aids can be seen through the different pre-test score results and post-test to be carried out on all 20 test samples of Year 1 students. Data retrieval of test results showed improvement in reading skills of the Hijaiyyah alphabets of Fathah lines after the intervention than before. The results of T-test had shown the differences as in Table 2 below:

Overall, it is concluded that the construction of auxiliary materials to read Arabic letters lined up by Fatha’s vocabulary based on this strategic imagery approach was found to have the potential to overcome the problems in teaching reading Arabic.

Cohen, A.D. (1987). The use of verbal and imagery mnemonics in second-language vocabulary learning. Studies in Second Language Acquisition, 9(1), 43-61.