Strategic Determinants and Stability of Real Exchange Rate in Bangladesh: 1976-2017

In economics, an exchange rate is the rate at which one notes will be substituted for another. It is furthermore observed as the worth of one nation’s currency in next of kin to another currency. The real exchange rate is a rate which dealings how loads of times an item of goods gaining locally; can be purchased from out of the country. It specified the ratio of objects are purchased in the domestic market with the items are purchased in the foreign market. The objective of this study is to analyze the influence of real exchange rate changes on relative price, Inflation rate, GDP growth rate, Interest Rate and Real GDP or Income level in Bangladesh during 1976-2018 by applying the Johansen Long run Co integration technique.

Chowdhury et al. (2014) studied a discrepancy in the empirical calculations of the exchange rate regime alternative. The piece defines a set of variables that helped to clarify the preference of exchange rate in Bangladesh for the period 1990-2011 with employing a time series analysis that elucidates interest rate; GDP growth rate; inflation rate and current account balance have affirmative relation with exchange rate. Hossain & Ahmed (2009) studied that explores exchange rate policies of Bangladesh under a floating rate regime in a widespread mode. The real exchange rate and the nominal exchange rate both ware considering in this examination with a recommendation that real exchange rate of euro should be alleviated. Hassan et al. (2016) stumble on convincing proof of the loss of aggressiveness of exports due to the real effective exchange rate admiration has been recognized in Bangladesh. Nevertheless, remaining nominal exchange rates runs and approval of the Real Effective Exchange Rate (REER) for the declared era pointed out that Bangladesh looks upper inflation than its trading colleague countries. Uddin et al. (2013) stated that an exchange rate activity considerably depends upon the macro rudiments of the particular countries. This study also indicates that the nominal exchange rate is influenced by the rise in the relative debt is another important source. Upholding mediumto- long time flexibility and short-term constancy should be the common purpose of exchange rate determination strategies in Bangladesh. Islam & Hossain (2014) examines the connection between the exchange rate, GDP growth rate and exports in Bangladesh for the period 1981 to 2013 with the conclusion of the positive relationship. They suggested the strategy makers should also prolong to get on prolific behaviors that will boost Bangladesh’s exports more than imports. Akther et al. (2013) considered that demand alarms particularly created from exterior area are accountable for pointed depreciation of BDT exchange rate throughout the two periods. As per econometric scrutiny supply shocks are also significant for exchange rate variation. Williams et al. (2016) reveals that the inflation rate of Bangladesh is relatively higher than the People’s Republic of China and also comparatively higher than the inflation rate in India until 2009. Independent Review of Bangladesh’s Development (2018) studied that the Central Bank should now focus on bringing stability to the exchange rate market. This may deplete the foreign exchange reserve in the coming months. Such steps will also help to contain money supply in the domestic market. Bhattarcharjee (2015) specifies that there are equally exterior and internal issues that affect inflation in small, open developing economies aand work on inflation is still developing. These lessons also will set the point for more quantitative research on inflation in little developing economies. Sultana & Uddin (2013) indicates inflation reasons by alters on the supply side of the market would linger mostly unaffected by the policies suggested by the IMF and assumed by the Bangladesh Bank. This Study also suggested that the government should obtain demanding possible strict events according to the inflation position of Bangladesh under the deliberation of the worldwide.

The intention of this study is to hit upon the followings:

2. The effect of Interest rate, Inflation rate and Real GDP on Real Exchange rate in Bangladesh Economy with the reference to 1976-2017.

This investigate is expressive in nature and the statistics is quantitative in nature. Only the minor data were employed. Secondary data were gathered from the Bangladesh Bureau of Statistics, World Development indicators report, World Bank indicators report, Bangladesh Bank annual report, Bangladesh economy in FY 2017-2018 and websites. The study period was 1976 to 2017. All relevant information was quoted in perpetual term. The study proposed a model to measure the Real Exchange rate, Inflation rate and Real GDP percent pressure in Bangladesh economy.

In this model rt is representing the real exchange rate, intt is interest rate, inft is inflation rate, and GDPt is Gross Domestic Product (GDP).

For examining the short run dynamic in relationship among real exchange rate, interest rate, inflation rate and gross domestic product, an ECM model has been developed.

Where, α4Ut-1 express the error modification term, it is the residual from the cointegrating equation, α3 indicated the error amendment co-efficient and αi are the projected short term co-efficient. If the real exchange rate rises (under devaluation of currency) then the growth of the economy is quite evident.

From Table 2 Augmented Dikky Fuller (ADF) unit root test, it can be said that all these macroeconomic variables are stationary.

From the Table 4 it can be said that there exist negative relationship among real exchange rate, interest rate, inflation rate and gross domestic product. Here is the retrieved co-integration equation.

From Table 5, it is very clear that the relationship among all those macroeconomic variables were not stable during 1976-2017. From R-squared value it is worth of saying that the data sets is relatively good for this work. Here real exchange can be explained properly because F-Statistic is robust enough at 5% significant level (Figures 1 and 2). 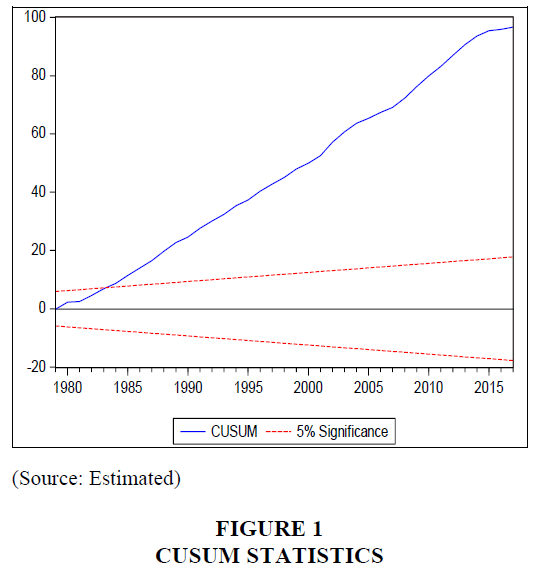 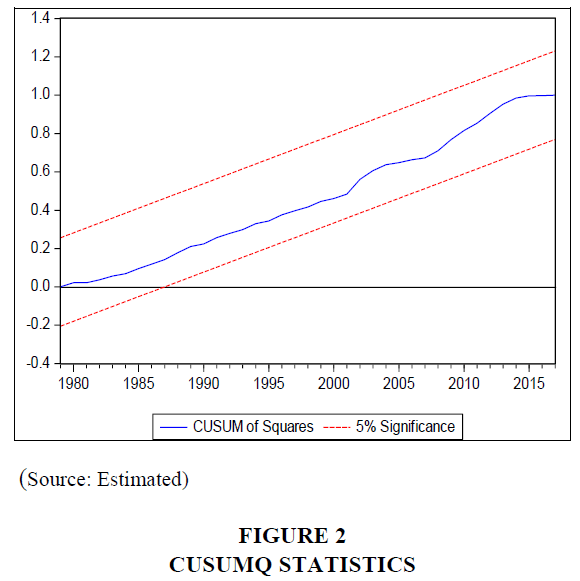 This paper fully focused on determined and stability of Real exchange rate in Bangladesh during the year of 1976-2017. This study shows some new findings which can improve Bangladesh overall economic policy. From this study it can say that now government should focused to keep interest rate in moderate level for economic growth. On the other hand economic policy maker to keep inflation in stable level because if inflation goes down or goes up certainly then it would be create a big problem in short run also in long run. So we are highly hopeful that government of Bangladesh and Economic policy maker will give high concentrate in their new economic policy.