Strategic Direction Setting of DFIs: A Qualitative Review Based on Performance Model

DFIs are specialized financial institution, appointed by the government and been entrusted for specific mandated roles on socio-economic development. In Malaysia, the mandate of DFIs is merely similar to Islamic economic objective that is for society benefit. Hence, the study been carried out to analyze on the Islamic economic objectives coverage by the DFIs and to explore on the involvement of the Shari’ah committee member of DFIs in the direction setting of the institution. All six Malaysian DFIs which prescribed under DFIA 2002 been included in the study. The result from content analysis shows that there is one Maqasid dimension which not been covered in the DFIs’ vision and mission statement. Furthermore, there is none DFI covers all nine PMMS model’s dimensions as the most covered is six dimensions. Based on interviews, it is found that the Shari’ah committee member is not involved directly in the direction setting of the institution but rather involved in the supervision and assisting the DFIs in Shari’ah matters. It is recommended the DFIs to shape their direction towards fulfilling the Islamic economic objectives since they are mandated so besides their intent to be as full-fledged Islamic. In ensuring the truthful attainment of Islamic economic objective, it is also suggested the Shari’ah committee member to be included as they could contribute on Maqasid Shari’ah perspective in determining and shaping the strategic direction of the institution.

Malaysian financial landscape consists of several types of banking and financial institutions including Development Financial Institutions (DFIs). DFIs are specialized financial institution which been officially appointed by the Malaysian government in 2002 and has been entrusted for specific mandated role. As the trusted institution, generally DFIs role is to focus and contribute on the socio-economic development in Malaysia and specifically to the mandated sectors consist of infrastructure, maritime, import and export, small and medium enterprises, agriculture and savings and investment behavior among the citizens.

The mandated role carries by the DFIs make them unique as the main operation would not mainly focus on profit, but rather to perform the mandated role in developing the real sector in the economy and social welfare (Francisco et al., 2008). The carried function of DFIs is merely similar to fulfilling the Islamic economic objective since the business focus to the benefit of the society. Furthermore, the intent of all six DFIs whose prescribed under Development Financial Institutions Act (DFIA) 2002 are towards full-fledged Islamic have proven the direction of DFIs is consistent towards Islamic notion. Hence, the study been conducted to review the current direction setting of Malaysian DFIs as stated in the vision and mission statement of the bank.

In Goal-Setting Theory, there is significance between the performance and the goal setting of an organization (Locke & Latham, 2015). David (2003) has map in Comprehensive Strategic-Management Model that strategy evaluation (measures and performance assessment) set at the end process and been reviewed to compare with strategy formulation (developed vision and mission statement). This proved that the performance measures in an organization been constructed based on the direction setting. In addition, the performance achievement been used for analysis to improve vision and mission formulation for future direction. The proper setting is vital since well-structured financial institution could lead to better efficiency in financial services (Islam, 2012). Further, good planning on attainable strategic plan (Agwu, 2018) and good governance (Grace et al., 2018) would contribute to better business performance.

Hsieh & Shanon (2005) mentioned that content analysis is one of the research methods to analyze data with subjective interpretation. The first research objective would be answered by reviewing the vision and mission statement of the DFIs. The data been retrieved from published annual report which the latest available on 2016. The data been coded based on Performance Measures based on Maqasid Shari’ah (PMMS) performance model’s concept and dimension as in Table 1. According to Erlingsson & Brysiewicz (2017), codes are instrument to reproduce the data in new ways. The coded data been analyzed by dimensions and by individual DFIs. The analysis by dimension gives input on the Maqasid dimensions covered by the DFIs. In addition, the most coded dimension been identified.

A set of interview questions had been prepared which consist of five themes. According to Tobi (2016), exploratory interview would be beneficial to develop ideas instead of statistical output. The theme covered mainly about the direction setting development and revision, DFIs mandate and Islamic economic objective. The dimensions of interview questions had been developed based on the suggestion of Pierre & Jackson (2014) who recommend using the possible item which is appropriate as data instead of relying fully on theory.

The result of content analysis shows that DFIs as a group covers all concepts and dimensions as suggested by PMMS model except for C1D3 that is “creating awareness in Islamic banking” (Figure 1). However, the effort can be referred to the DFI’s website on encouraging customers’ employs Islamic product. In addition, from the interview with the Shari’ah committee member, it is found that all banks addressed the intent towards being fullfledged Islamic and currently two of them have been awarded as full-fledged. 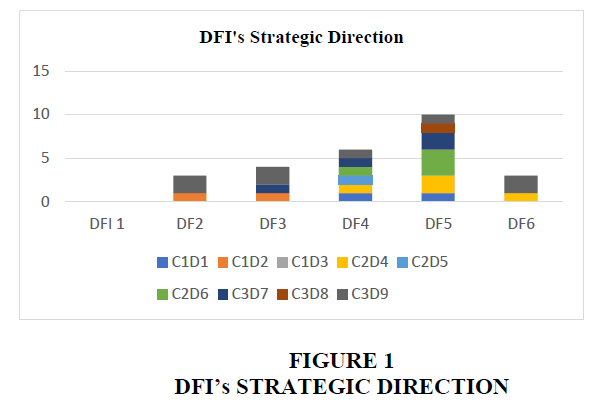 Referring to Figure 1, C3D9 on dimension of “investment in vital real sector” demonstrated as the highest frequency code. The result reflects the Malaysian DFIs put the mandate as the priority in the bank’s strategic direction setting. Besides that, C3D7 that is “profitability” and C2D4 “fair dealings” are at the same frequency. Supporting by interview, half of the respondent did remark term “profit” in the session. The respondents mentioned, even the DFIs received allocation from the government, but they still stand as business entities that need to ensure profit for the survival of the bank.

DFI5 have the most coded dimension with the highest frequency coding of 10 times covering six coding extracted from the strategic direction statement. In similar, DFI4 also been tagged to six coding with frequency of six. DFI3 covers three PMMS dimensions and DFI2 and DFI6 both covers two dimensions. In addition, it is found that the DFI’s nature of vision and mission statement who target for retail customer covered more dimensions and DFIs who focus on businesses been coded twice on “investment on vital real sector”.

From the interview of the six respondents, the researcher found that the Shari’ah committee member does not involve directly in shaping the direction setting of the institution. However, most of the respondent mentioned that they are involved indirectly in giving opinion and advice on planning of the bank. Four of the respondent did mention about the role of the bank in carrying the government mandate. Though, the respondent did emphasize their task is to oversee the Shari’ah compliant matters rather than ensuring the bank to fulfill the mandate.

Furthermore, all the respondents agree the Shari’ah committee member do involve in ensuring fulfillment of the Islamic economic objective and it can be seen in the involvement effort warranting for full-fledged Islamic status for the bank and evaluating on the impact of a proposed project whether would harm the society or not. In suggestion to involve the Shari’ah committee member in shaping the direction setting of the bank, five over six respondents certainly agree and only one is not certain to get involve, but mentioned willingness if the opportunity been given.

In conservation for better reporting of DFIs as institutions that carries the government mandate, the Shari’ah committee members have several suggestions. First, suggestion is to have a transparent developmental report which should report on the impact of DFIs on the country or state development performance as a proof for the significant role of DFIs. According to Massa (2011), there is no research been conducted on the impact of DFIs. Furthermore, the findings by Appleyard (2011) on the study in UK and US found that there is uneven geographical coverage on financial offerings.

Second, suggestion is to have a clear quantitative parameter on Shari’ah compliant and Islamic economic objectives attainment to report progress and achievement. The third suggestion is to reduce and eliminate product which is imitating to conventional such as tawarruq. This is consistent with the fourth suggestion which recommend the bank to commit more on research and development of Islamic banking product since there is a continuous need for solutions and alternative of Islamic banking product.

Overall, the DFIs as a group is yet to cover all dimensions of Islamic economic objectives as suggested in PMMS model. In direction towards Islamic full-fledged, the DFIs should not only focus on the compliance but should focus on strategies for real Islamic economic objectives. Samad and Hassan (2000) addressed from business point of view, an Islamic financial institution is not only a firm but also a moral trustee of the depositors. Furthermore, the Shari’ah committee should be considered to be involved in shaping the direction setting of the DFIs, so that the truthful Maqasid Shari’ah could be attained.

Since all six DFIs are on track to be full-fledged Islamic, the strategic direction setting should reflect the Islamic economic objectives to safeguard the role and direction of the banks towards attaining the truthful Maqasid Shari’ah in economics. Therefore, involvement of Shari’ah committee member should be revisit to capitalize their deep understanding on Shari’ah perspective in shaping the bank’s direction.