Mobbing is an adverse behavior that occurs among individuals and badly affects those (Kara et al., 2018). Continuously putting down an individual, disturbing him, showing that he is a liar and bad conversation about him are a few examples of it (Davenport et al., 2003). Due to mobbing an individual often becomes the target of harmful and disrespectful behavior so it is termed as an insidious form of emotional assault (Yücetürk & Öke, 2005). According to Leymann and Gustafsson (1996) a negative kind of behavior, among hierarchical supervisors or subordinates and colleagues, whereby an individual concerned is repeatedly degraded and criticized indirectly or directly by one or more individuals for the aim of alienating him or her are the chronic aspects of mobbing. An individual suffers and drop his or her self-confidence too. Usually, the purpose is to eliminate the victim from the organization (Duffy & Sprerry, 2007).

History revealed that in the 1960s the term of mobbing was used firstly for the animals and later on for children that showed the same effects between them. After that, in The 1980s, Leymann construed that the concept of mobbing was found in adults as well (Davenport et al., 2003). According to Maguire (1999) the term mobbing refers to “non-bloody war” in any workplace. So, many studies are presenting the significance and urgency of this behavior.

The present study also takes the lead to empirically investigate the proposed mechanism in the banking sector of Pakistan as it is the lifeblood of each economy. According to “THE NATIONS” report, Pakistan has 22nd rank for the highest rate of mobbing. So the proposed mechanism would be worth examining on employees working in banks.

Further, our first objective of this study is to encroach the past studies to test whether abusive supervision would endeavor destructive effects on banking employees. Second, we anticipate exploring the underpinning process of this direct link by involving work stress as a mediator based on Affective Event theory. Lastly, new condition, i.e. external locus of control and perceived organizational support is incorporated into our theoretical framework to help examine the aspects that may boost the effects of mobbing.

Employing the Affective Event (AET) theory (Weiss & Cropanzano, 1996), the current study explained the mediation mechanism between abusive supervision and mobbing by suggesting employee work stress as a mediator. According to Affective Event theory, certain work events and emotions can generate behaviors that are professed as devastating. Abusive supervision is a workplace event that leads to mobbing (Martinko et al., 2013).

So, relating to research objectives, this paper adds to the context of abusive supervision and mobbing behavior simultaneously. It enhances the abusive supervision’s literature by expanding the current consequence and examines how and when abusive supervision exerts influence on mobbing in the banking sector. Further, this research contributes to the literature of proactive behavior of employees. Also, it increases our concern of antecedents by focusing on abusive supervision, a dark aspect within an organization. The investigation of the mediating process (work stress) gives a new vision through which abusive supervision influences mobbing. Finally, by investigating the moderating effects of (perceived organizational support and external locus of control), this study upgrades current outcomes on moderators by which effects of abusive supervision, work stress, and mobbing could be developed. In the context of Pakistan, no study has ever been conducted showing the importance and factors which are associated with mobbing among employees in the banking sector (Figures 1-5). 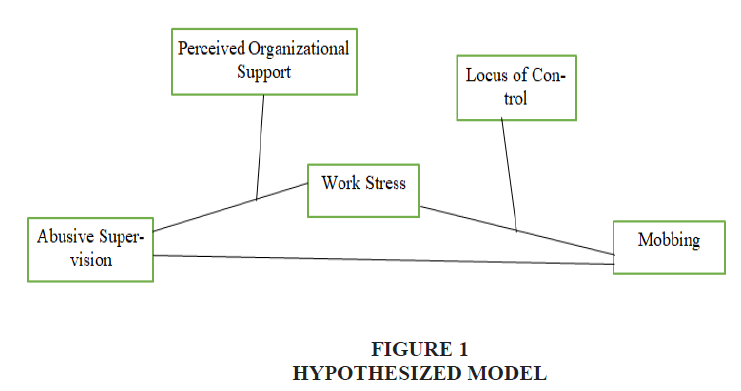 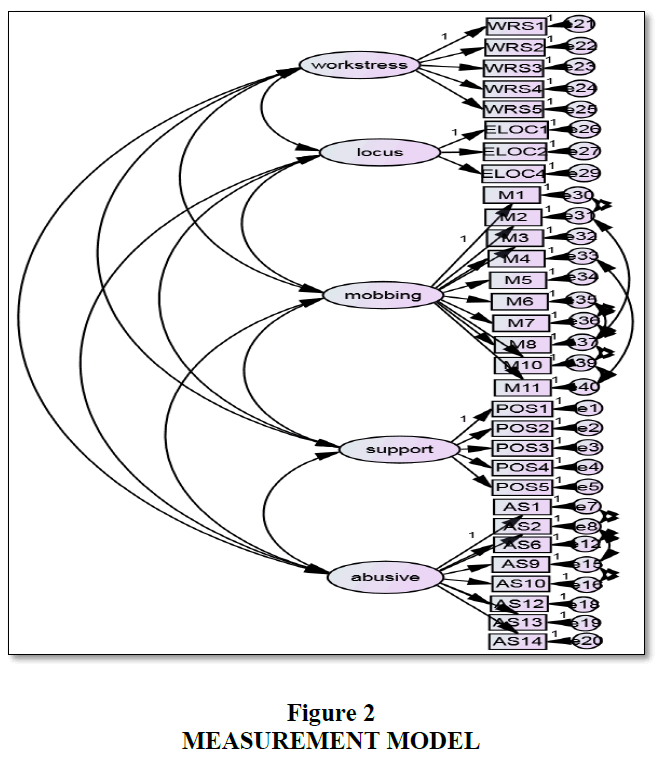 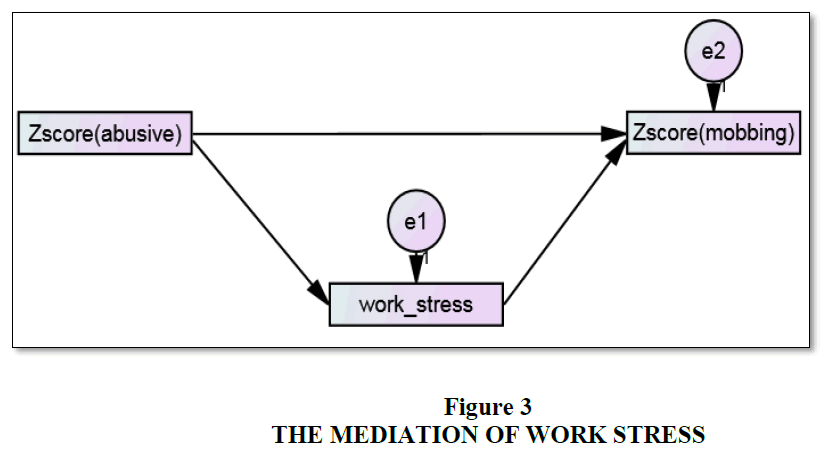 Figure 3 The Mediation of Work Stress 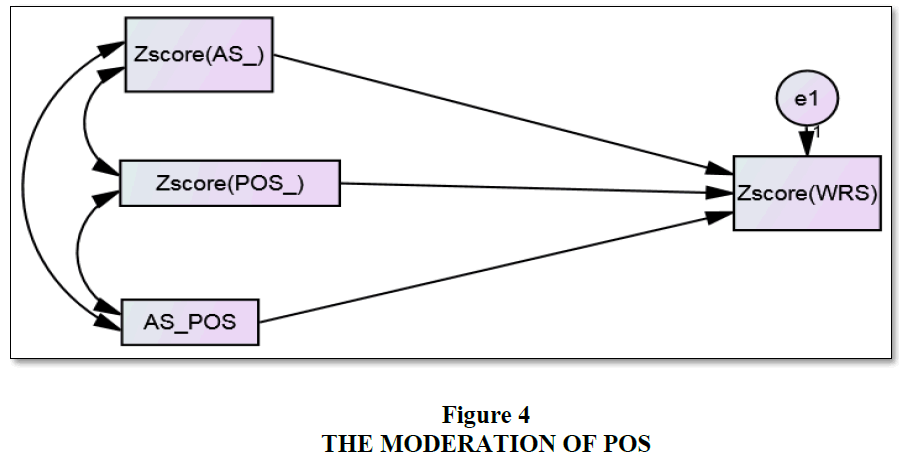 Figure 4 The Moderation of POS

Figure 5 The Moderation of LOC

According to Weiss & Cropanzano (1996), AET involves the role of emotions and their judgment in the association between experiences of individuals and their behaviors. Further, the theory explains that certain work events examine an individual’s attitude and behaviors. Recent application of AET has focused on particular work behaviors that can be subjected to both attitudinal and affective effects (Wegge et al., 2006). According to Mignonac and Herrbach (2004), “emotional experiences describe how many work events affect the satisfaction of the job”. Our application of the theory initiates with the effect of abusive supervision (work event) on work stress (emotion) and mobbing (behavior).

Abusive supervision is defined as “subordinate’s anticipations regarding supervisor’s involvement in the exhibition of antagonistic verbal and non-verbal behaviors, apart from physical contact” (Tepper, 2000). Many studies in a row captured great importance on abusive supervision (Lian et al., 2014; Kacmar et al., 2013; Tepper, 2007). Studies on verbal behaviors, like as public deride have been connected with dysfunctional concerns (Burton & Hoobler, 2006; Harris & Cast, 2013; Thau et al., 2009, Tepper, 2000). Studies suggested that subordinates emphasize the negative behavior of their supervisors and observe it as aggressive (Watkins et al., 2019; Tepper, 2007). Perception of abuse is made active in employees with aggressive characteristics (Martinko et al., 2013).

Stress relates to “an association that exists between an individual and his/her surrounding environment that is considered to be unstable, that association is perceived as unstable because of the difference between one’s physical and psychological resources and the possible situational demands”. In 1989, Hobfoll construed that people strive to maintain their resources, like as energy and time, and if such resources are threatened then it leads to stress. Work stress is a concern to the combination of the workplace environment, job culture, and associations that exist in the workplace.

Tedeschi & Norman (1985) argued that abusive supervision pertains to “shifting a harmful behavior of a person from a primary victim to a secondary victim”. Twenge and Campbell (2003) have construed that displaced aggression takes place when things go incorrect, traits of the subordinates-supervisor relationship might be an important cause for this aggression. Aryee et al. (2007) explained that when supervisors are discouraged by the conditions of the organization, then their subordinates face abusive supervision. In line with this, subordinates face abusive supervision when their supervisors are frustrated which may cause the emotional response of work stress among them as their necessary work resources are threatened by the emotional abuse. Thus, we hypothesize the following:

Perceived organizational support relates to “employees’ belief that how much their organization values and cares about their well-being” (Dai et al., 2019). Lee and Peccei (2007) described that perceived organizational support is high if job crafting opportunities are greater and it facilitates employees in the form of emotional support, greater self-esteem, etc., all these things promote work engagement in employees. It is likewise an important resource as it provides support for workers in extreme conditions (Kraimer et al., 2001). It fulfills socio-emotional needs as well as supports in terms of technology, equipment and physical support.

As discussed earlier, abusive supervision depletes the efficiency of employees and diminishes their capacity to meet their job demands and achieves expectations, which increase employee’s work stress (Hackney & Perrewé, 2018). As earlier 1980s, the term mobbing has been used as workplace aggression by organizational researchers (Leymann, 1996). The term mobbing has used by an ethologist to explain attacks by a group of a small number of animals frightening a single greater animal. Leymann (1996) stated a similar kind of behavior at the workplace and used the term mobbing in the 1980’s. It is defined as “a communication which comes under the category of immoral and hostile used by one or more individuals systematically toward single individual” (Leymann, 1990).

Mobbing is the repetitive behavior of people or groups that deliberately harm others with whom they work. Einarsen (2000) argued that mobbing behavior leads to adverse effects on the victim. Work stress was linked with employees engaging in mobbing (De-Cuyper et al., 2009). So, it is anticipated when supervisors are abusive, work stress among employees will be intensified leading to emotional assault in terms of mobbing. Thus, we hypothesize the following:

The Moderating Role of Locus of Control

H4: External locus of control moderates the relationship between work stress and mobbing.

The Mediating Role of Work Stress

Previous studies stated that role ambiguity, role conflict, and work amplification caused the work stress which leads to low satisfaction of job. According to AET employees face certain workplace events, eliciting emotional responses among them that cause behavioral reactions. Abusive supervision plays the role of negative workplace event (Tepper, 2007) that depletes the efficiency of employees and lessens their capability to fulfill their job demands and attain expectations, which increase employee’s work stress (Leymann, 1996; Hackney & Perrewé, 2018; Mackey et al., 2018). We hence contend that with abusive supervision employees may experience work stress which in turn instigates them towards mobbing. Accordingly, the influence of abusive supervision on mobbing should be transferred via work stress. Hence, we propose the following:

The present study, utilized quantitative method because it is more reliable. The time horizon was cross-sectional because of data collected in one period. The unit of analysis is the individual employee of banks. The target population was non- managerial employees of banks in Lahore, Pakistan. The sampling strategy was non-probability convenience sampling due to time and money constraint. Item-response theory was used to collect sample size. Total 480 questionnaires were disseminated among bank employees out of whom 295 respondents filled back completely and remaining were not useful. The data were analyzed through SPSS v20 and AMOS v23.

To measure AS a 15-item scale developed by Mitchell and Ambrose (2007) was used in this study. A sample item is “My Boss tells me my thoughts and feelings are stupid, invading my privacy, mocks me”. The reliability of this scale was .810.

To measure POS, an 8-item scale developed by Eisenberger et al. (1986), which was reduced by 6 items were used to measure this variable. A sample item is “My organization cares about my well-being”. The reliability of this scale was 0.853.

To measure WS, a 5-item scale developed by Cohen (1986) was used in this study. A sample item is “My work is stressful, and it requires effort”. The reliability of this scale was 0.839.

To measure ELOC, a 5-item scale developed by Trice et al. (1987) was used in this study. A sample item is “I have little control over the things that happen in my life”. The reliability of this scale was 0.747.

To measure Mobbing, a 19-item scale developed by (Einarsen & Hoel, 2001) was used to measure this variable. A sample item is “Raising gossips and rumors about the person”. The reliability of this scale was .783.

The above Tables 1 & 2 showed that mean value is ranging from 3.67 to 3.75, the standard deviation value is ranging from 0.545 to 0.819, and the reliability of each variable showed diagonally, which is according to a threshold value. According to Nunnally (1994), the reliability of a variable is good if it is greater than 0.70. Moreover, the correlation matrix explained the relationships among variables.

The findings of this study suggested that job stress might occur due to psychological distress (life distress, economic hardships). The fourth hypothesis was work stress will mediate the relationship between abusive supervision and mobbing. In prior studies, Hackeny and Perrewe (2018) found that when workplace abuse is increased, then the workplace stress of the employees also increases, which leads to emotional assault. And the result of SEM construed that when the abusive supervision takes place at the organization, then many other consequences will occur. Research construed that abusive supervision leads to minor stress, but after some time, it becomes more intensive aggressive behavior by the value of SEM (β=0.016, p = 0.126).

Despite numerous strengths, this research study is not without future guidelines and limitations. Because of convenience sampling, data was gathered from bankers of Lahore, Pakistan so that’s why it is not generalizable in different contexts. This study could be in multiple contexts in the organizations and could also be an experimental study in the future. The sample size is small. Data is collected only from banks of Lahore, Pakistan. Future research may be replicated in different sectors of Pakistan or around the globe.

Leymann, H., & Gustafsson, A. (1996). Mobbing at work and the development of post-traumatic stress disorders. European Journal of Work and Organizational Psychology, 5(2), 251-275.

Spector, P.E., & O'Connell, B.J. (1994). The contribution of personality traits, negative affectivity, locus of control and Type A to the subsequent reports of job stressors and job strains. Journal of Occupational and Organizational Psychology, 67(1), 1-12.