The production growth of large and medium manufacturing industries in the first quarter of 2015 decreased by 0.71 percent (q-to-q) against the fourth quarter-2014. The types of industries that experienced a decrease in production were non-metallic minerals down 6.64 percent, the electrical equipment industry fell 4.74 percent and the wood industry and cork goods (excluding furniture) and wickerwork from bamboo, rattan down 4.38 percent.

Table 2 shows that Indonesia ranks fifth of rattan furniture exporting country to Japan, which is the first order is occupied by China. While the export of rattan products is still dominated by large companies, whereas they are vulnerable to the world economic crisis. Therefore the potential of small-scale enterprises to be a mainstay sector for Indonesia. The existence of small business craftsmen from rattan goods most widely spread on the island of Java. Small rattan craft industry in Java still dominates compared to other provinces in Indonesia, but the decline from 2014 to 2015 is very significant, therefore small rattan craft industry in Java becomes interesting to be studied.

Small-scale rattan-based furniture in Java is still experiencing difficulties in expanding their business, especially in facing competition in the global market. There is even a decline in export value over the last three years, while China's toughest competitor has increased by 20.72% market share, while Indonesia as the owner of Rattan raw material is only 7.68%. This can be seen in Table 3 below.

Based on Table 3 above, it appears that the decline in the value of sales and market share is an indication of the tendency of the business performance of small-scale rattan furniture on the Java Island is relatively decreased. David (2013) describes the financial ratios used to evaluate strategies consisting of: Return on Investment (ROI), Return on Equity (ROE), Profit Margin, Market Share and Debt to Equity, Earnings per share, Sales growth and Assets growth. In addition, in the opinion of Wheelen et al. (2015) performance related to profitability, market share and cost reduction.

The alleged aspect related to the decline in the performance of small-scale rattan furniture business in Java is due to the fact that the competing strategy has not been formulated precisely. Their business in Java Island is in the position of weak-moderate strength. The national rattan processing industry has difficulty in obtaining raw materials caused by the existence of the export policy of rattan raw materials and the rampant smuggling of rattan abroad. In addition, the production of mastery of finishing technology is still behind and the design of processed rattan products is still determined by the buyer from overseas (job order). On the other hand, there is still weak market intelligence, resulting in limited export market information. (http://www.kemenperin.go.id/artikel/471/Development-Industry-Processing-Rotan-Indonesia).

On the other hand, Wheelen et al. (2015) argue for a generic strategy that aims to outperform other companies in an industry, including: cost leadership, differentiation and focus.

Based on this background, the authors are interested to examine the influence of relationship and competitive strategy on the performance of the rattan industry in Java.

Based on the above description, this study aims to examine the influence of relationship and competitive strategy on the business Performance of rattan industry in Java.

2. Reactive Marketing: The salesperson sells the product and encourages the customer to call if he or she has questions, comments or complaints.

4. Proactive Marketing: The salesperson contacts the customer from time to time with suggestions about improved product uses or new product.

5. Partnership Marketing: The Company works continuously with its large customers to help improve their performance. (General Electric, for example, has stationed engineer’s at large utilities to help them produce more power).

In this study competitive strategy is measured by the dimensions of cost leadership strategy, differentiation strategy and speed strategy.

In this study, business performance is measured by using dimensions of sales volume, profitability and market share.

Based on the above description, then prepared the research hypothesis that is:

H1: Relationship and competitive strategy have a positive effect on the business performance of the rattan industry in the island of Java either simultaneously or partially.

Goodness of Fit-Outer and Inner Model

Inner Model: The analysis of structural model (inner model) shows the relationship between latent variables. Inner model is evaluated by using the value of R Square on endogenous constructs and Prediction relevance (Q square) or known as Stone-Geisser's used to know the capability of prediction with blindfolding procedure. Refer to Chin (1998), the value of R square amounted to 0.67 (strong), 0.33 (medium) and 0.19 (weak) and Prediction relevance (Q square) 0.02 (minor), 0.15 (medium) and 0.35 (large).

The Table 4 show that R2 of Business Performance as endogenous variable is in the medium criteria (>0.33) and the value of Q square in the large criteria (>0.35), so that can be concluded that the research model is supported by empirical condition or the model is fit.

The Table 5 shows the result of measurement model for each dimension on indicator. 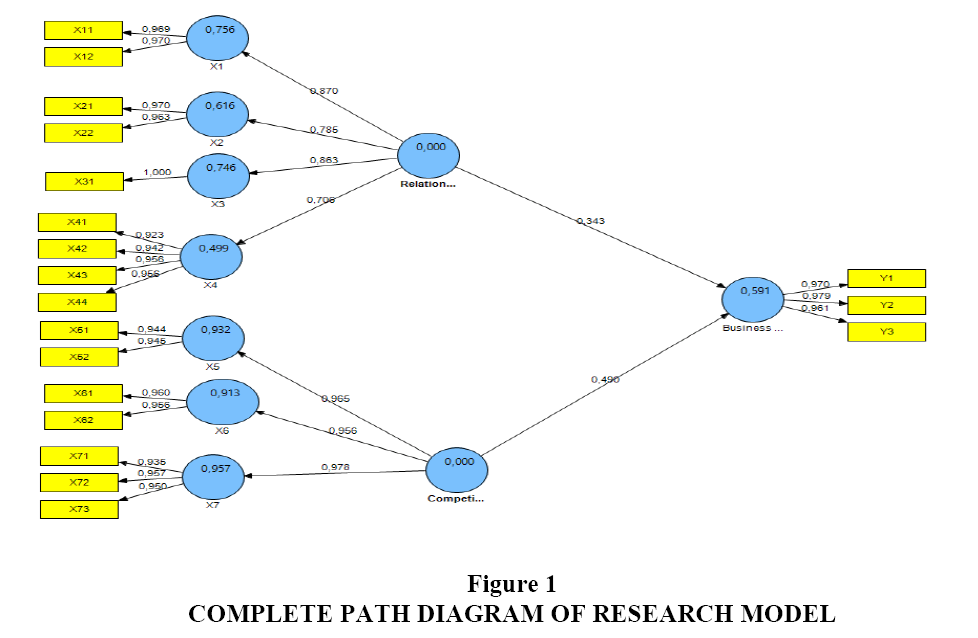 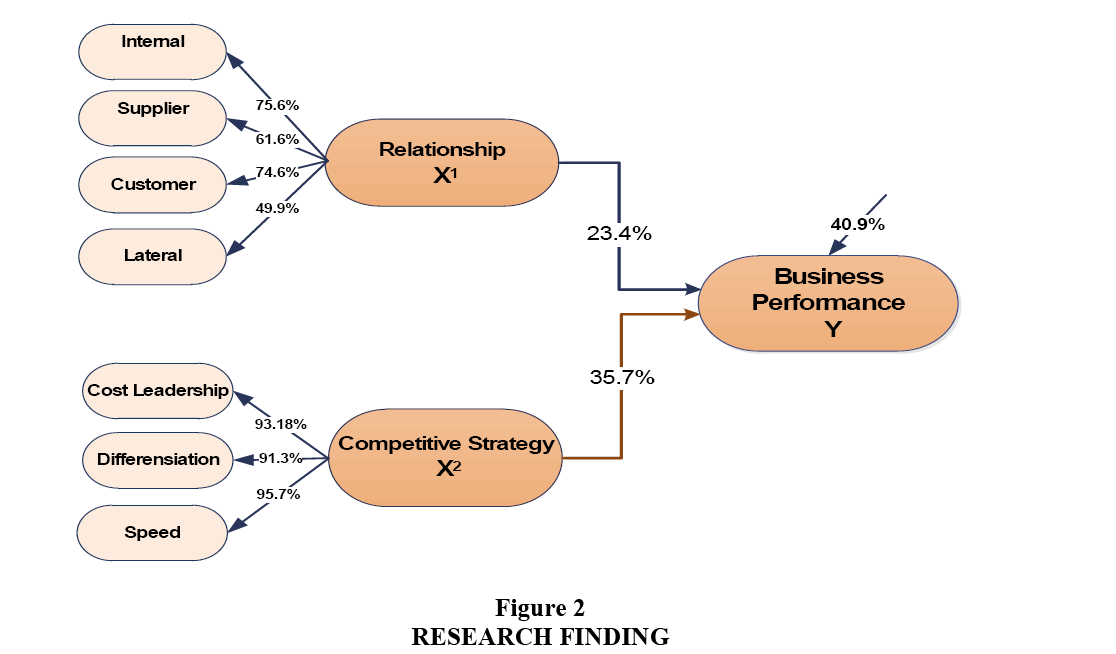 Based on the research framework and then obtained a structural model as follow:

Simultaneous Hypothesis Testing: Below is the result of simultaneous testing of hypothesis:

Based on the table, it is known that within the degree of confidence of 95% (α=0.05) simultaneously there is the effect of relationship and competitive strategy to Business Performance amounted to 59.1%, while the rest of 40.9% is affected by other factor did not examined.

Partial Hypothesis Testing: Below is the result of partial testing of hypothesis:

Based on hypothesis testing result, can be described the Research Model Finding as follow:

Companies are required to provide quick response to customers. In addition, the company is also required to anticipate the movement of competitors and follow the development of information technology in business development faster than its competitors.

Meanwhile, judging from the aspect of relationship, it is revealed that internal relationship gives greater role than relationship with supplier, customer and lateral in supporting the improvement of business performance. Therefore, internal relationships should be further developed by rattan entrepreneurs on the island of Java through increased synergies and collaboration among the inside unit of the company in order to be able to support faster strategy embodiment better.

The results of this study indicate the dominance of competing strategies in improving business performance, supporting the findings of Teeratansirikool et al. (2013) that competitive strategies improve company performance positively and significantly through performance measurement. Abidin, Adros & Hassan (2014) found that strategies provided positive improvements in a number of projects being addressed. Daneshvar & Ramesh (2012) found that information technology (IT) can help companies to adopt cost reduction strategies through reduced staff costs. The IT strategy contributes significantly to improving profitability and products.

Based on the results of this study, it is suggested to the management of rattan companies in Java to improve competitive strategy in an effort to improve business performance. Speed strategy is an aspect that plays more dominant effect than cost leadership strategy and differentiation strategy in improving business performance. Thus the companies are required to provide quick response to customers and anticipate the movement of competitors and follow the development of information technology in business development faster than its competitors. This finding of the study can be used in preparing the framework of the future study.