The Inclination of Corporate Voluntary Environmental Disclosure in Bangladesh: Effect of Size, Industry, and Operating Performance

The empirical study of corporate voluntary environmental disclosure is in a growth stage (Masum et al., 2019a & 2020a). Masum et al. (2019b) conducted a comprehensive study concerning the corporate climate change reporting and found that about 30 percent of the selected sample does not report any climate change issues in their corporate reporting. Whereas Masum et al. (2019a) conducted a comprehensive study to explore the association of five dimensions of CSR disclosure on corporate performance and concluded that the overall scenario concerning to the corporate environment related CSR is minimum and concludes that the Environment related disclosure of the business organization has a positive effect on corporate performance. The link between better firm performance and higher corporate reputation has been well-evidenced by several researchers (e.g., Brammer & Pavelin, 2006; Brown et al., 2010). More recently, based on the resource based view (Hart, 1995; Russo & Fouts, 1997) of the firm and the voluntary disclosure theory (Verrecchia, 1983 & 2001), researchers (e.g., Qiu et al., 2016) argue that firms with greater economic resources would go for more extensive voluntary disclosure. Since greater economic resources lead the voluntary disclosures, we may expect current voluntary disclosure to be affected by past firm performance. Consistent with that, Qiu et al. (2016) provide evidence that the UK firms with better past firm performance go for more voluntary social disclosures, though not more voluntary environmental disclosure.

A few other studies that investigate the relationship between financial performance and voluntary environmental disclosure include Al-Tuwaijri et al. (2004); Cormier et al. (2005), and Clarkson et al. (2011). However, these studies were conducted in different context and yielded insignificant and inconsistent results. The authors recognize the lack of focus on the link between operating performance and voluntary environmental disclosure though environmental performance is directly related to the production process and the output of the production process is directly reflected in the operating performance. In line with the institutional theory (Meyer & Rowan, 1977), Oliver (1991) presents the typology of strategic responses to institutional processes that claims habit as one of the tactics of the acquiescence strategy. Wangombe (2015) calls habit as passive adoption of corporate environmental reporting. However, there is a lack of adequate evidence about the habitual corporate environmental reporting. It is expected that the firms engaged in corporate environmental reporting continues to do that and those not engaged continues not to do that.

The sample of the study consists of a total of 284 firm-year observations that include publicly listed companies representing all industries. The annual reports of the years 2010-2014 has been collected from the official repository of Dhaka Stock Exchange. The annual reports were then thoroughly examined to identify the environmental disclosure related words. The dependent variable, the environmental responsibility disclosure index (ERDI), values are the counts of the environmental disclosure related words or phrases found in the annual reports. In addition, the financial and other quantitative data are collected from the same annual reports. Based on the literature review, the ERDI is predicted to be influenced by the size, industry, present and past operating and financial performance, and past ERDI of a firm and the year of the disclosure (Masum et al., 2019a & 2020a). Size is measured by log of total assets. Operating performance is measured by both present and one-year lagged values of several proxies: log of sales, gross profit margin (GPM), and operating profit margin (OPM). Financial performance is measured by both present and one-year lagged values of net profit margin (NPM), earning per share (EPS), and financial leverage (Lev). In addition, the habitual element of voluntary environmental disclosure is measure by one-year lagged value of ERDI.

The descriptive statistics and the distribution of the environmental responsibility disclosure index of the whole sample have been portrayed in the in Figure 1. Overall, the distribution is far from a normal one. Consequently, for a robust conclusion the data analyses are conducted using both parametric and non-parametric statistical methods. The summary statistics and the box plot in Figure 1 of the ERDI of all of the industries indicate that 50% of the companies have not disclosed anything voluntarily on their environmental responsibility. However, among the remaining 50%, there are a number of outliers which disclosed exceptionally higher amount of their environmental disclosure. These findings are also consistent with the findings of Masum et al. (2019a). 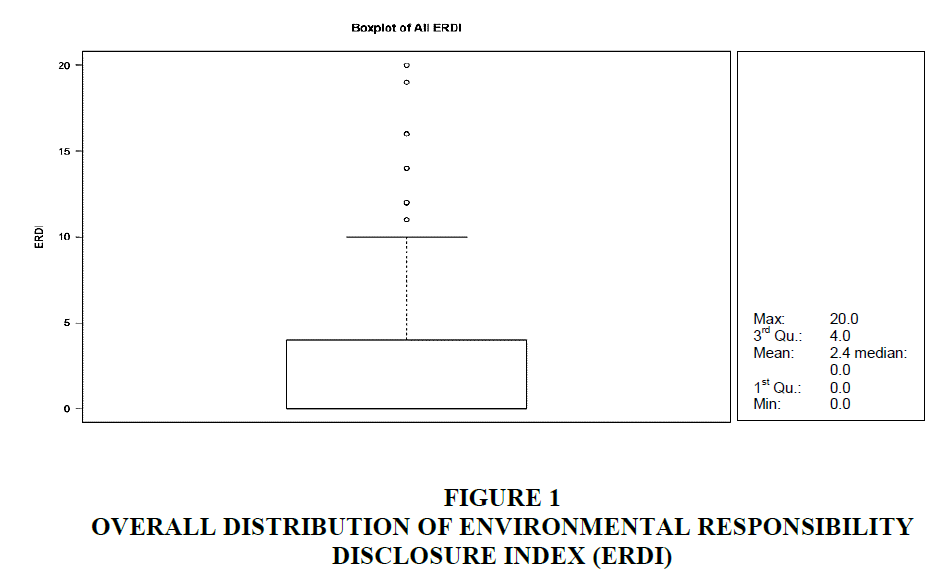 The correlation coefficients across the different variables have been plotted in Figure 1. Panel A shows the plots the correlation matrix of the variables of the same year whereas Panel B plots the one-year lagged variables and ERDI (termed as EnvRespDisc in the figure). Bigger and darker circles indicate higher correlation and smaller and lighter circles indicate lower correlation. From the matrices, it is indicative that both the lagged and same-year total assets (LTotAs and LLTotAs), total equity (LTotEq and LLTotEq), sales (LSales and LLSales), and operating profit margin (OPM and LOPM) are relatively highly correlated with ERDI (EnvRespDisc). To investigate the causal relationship, regression analysis is conducted for ERDI against lagged and same-year firm characteristics and profitability variables including the lagged ERDI. The results of the linear regression as well as its normality tests are shown in Table 1. Heteroskedasticity-robust standard errors have been used to address the heteroskedasticity issue. However, the normality test above implies that the residuals are not normally distributed. As a result, conclusive inference is not possible from the linear regression results though many factors are found to be significantly related to the environmental responsibility disclosure. In such cases, generalized linear regression model is suggested and testing the causal relationship is attempted using the variant Poisson Regression Model that allows too high number of lower values. Finally, based on the above regression results, we can conclusively infer that the voluntary environmental disclosure in the context of this study is positively influenced by sales and previous tendency of such environmental disclosure by the same firm at a statistically significance level. However, the voluntary environmental disclosure has a significantly negative impact of the total assets of the firm.

This manuscript is prepared based on the research project partially sponsored by United International University with grant number 161001.