West Kalimantan region has an area of 146,807 km2 with a population of 4,789,574 people in 2015 has 36 general hospitals and 8 special hospitals. However, the performance of hospital services in the region tends to be not optimal which is indicated by still not able to the hospital management in reaching the set target. Based on data in 2015 revealed that the level of hospital service standard achievement includes BOR (Bed Occupancy Rate) that is the percentage of beds occupied in one time unit only reach 51.80%. Bed Turn Over (BTO) 39.19 times and Turn of Interval (TOI) 4.49 days.

Based on the preliminary survey (2017) of 15 general hospitals in West Kalimantan seen from health service quality indicator, the average performance achievement of general hospital is presented in the Table 1.

Based on Table 1 above, there are 4 (four) items from indicators that are still below ideal achievement, they are: BOR, LOS, TOI and BTO. While the NDR (Net Death Rate) is the death rate 48 hours after treated every 1000 patients out and GDR (Gross Date Rate) is the death rate for every 1000 patients out of ideal category. BOR is also used in the research of Kamalia, Palilati, Sukotjo & Hatani (2015) which measures the performance of General Hospital in Southeast Sulawesi based on Bed Occupancy Ratio (BOR) dimension, cost recovery, market share, employee satisfaction, patients and their family?s satisfaction. In addition, there is an increase in the number of passengers destined for Malaysia, among them for treatment, with the number of passengers sick during the year 2015 as many as 445 people, thus increasing competition to get patients.

So based on the above description, it can be said that the performance of hospitals in West Kalimantan cannot be said superior. It is allegedly caused by poor hospital reputation. This is indicated by the lack of public confidence in the credibility of hospital?s services. So many Indonesian citizens who trust hospitals abroad to treat certain diseases. It shows that not all hospitals in Indonesia have service advantages. Particularly at local government-owned hospitals where the services provided are sometimes slow in dealing with accident patients or emergency patients. Whereas the local government-owned hospitals in terms of financing are financed partly by the local government concerned. This causes some patients to choose alternative treatment paths such as acupuncture, reflection and herbal remedies. Meanwhile, according to Fombrun (2001), there are some basic elements that should be the centre of attention in improving the reputation namely: credibility, reliability, trustworthiness and responsibility.

Meanwhile, Hall & Lee (2014) show a positive relationship between company performance and company reputation and found the importance of corporate reputation as an important strategic asset to be managed by the company. Ou & Hsu (2013) show that the company's reputation moderated the relationship between human capital and innovative performance. In addition, Iwu-Egwuonwu (2014) finds that cultivating a strong reputation is a necessary foundation for companies to beat competition, improve market prospects and to warn on-going financial performance and existence.

The low performance and reputation of the hospital is alleged due to the weakness in the development of partnerships implemented by the hospital. The current phenomenon shows the still low ability of hospital management in developing and maintaining strategic partnership with various parties. Among them are partnerships with patients, where only high-class hospitals are already practicing a better customer relationship program. In addition there are still some weaknesses in the development of partnerships with suppliers that is in terms of selection of qualified and professional suppliers. Some hospitals still apply unprofessional procurement tenders where only companies with proximity to directors can win the tender, so that it risks the quality of the required goods. In addition, there are still some problems in the inter-functional coordination aspect. Meanwhile, according to Cravens & Piercy (2013) that partnership is an effort to cooperate with stakeholders, where strategic alliances are used by many competing companies around the world. Partnerships include vertical relationships consisting of relationships with suppliers and customers as well as horizontal partnership consisting of lateral and internal partnerships.

Meanwhile, Agus & Hassan (2012) found that the practice of strategic supplier partnerships and their implementation has a significant relationship with product quality performance and business performance. In addition, Clement (2013) finds that overall performance in companies that implement partnerships is better than single-ownership firms.

Based on the background of the research, this study aims to examine the effect of institutional partnerships and hospital reputation on the performance of hospitals in West Kalimantan.

In the concept of Cravens & Piercy (2013) partnership is an effort to cooperate with stakeholders, where strategic alliances are used by many competing companies around the world. Partnerships include vertical relationships consisting of relationships with suppliers and customers as well as horizontal partnership consisting of lateral and internal partnerships. While Wheelen & Hunger (2015) state that a partnership strategy can also be used to create competitive advantage in an industry by working with other companies in the form of collusion or strategic alliance.

Wu & Shiu (2014) state that ?Partnership refers to a strategic alliance established between independent companies which share common objectives; it holds in great account the interdependent relationship between allied companies and may attain goals otherwise unachievable by their individual efforts?.

Walker (2010) illustrates the importance of a reputation for a company where a good reputation can provide strategic advantages such as lowering company costs, enabling companies to provide the highest price, attracting bidders, attracting investors and customers, adding to profitability and creating a competitive buffer.

The importance of reputation for the hospital is explained by Hibbard (2005) in Bourke (2009) if a hospitals reputation is affected, it may eventually experience market share decline via customer choice, purchaser choice or physician referral. Also stated by Healthcare Collector (2006) on hospitals, marketing and maintaining your reputation is vital. The article also states that surveyors J.D. Power and Associates found that 75% of patients use reputation-related information as their primary criteria in selecting which hospital they attend; therefore studying reputation in the healthcare industry is essential. Hospitals need to enhance the quality of patient care and effectively communicate their performance to the communications in which they operate.

Bourke (2009) mentions hospitals that have a positive reputation impact on: hospital-related pride, staff will tell where they work, feel tied to winners and stories of suskes, development of hospitals and facilities, positive perceptions formed by the public with high support to hospitals and staff will feel proud to work in the hospital.

As for developing a reputation, Fombrun (2001) explains that to help companies establish a strong reputation so that it will have positive and profitable impacts, there are some key elements that need to get attention, namely: credibility, reliability, trustworthiness and responsibility.

In this study, hospital reputation is measured by dimensions refer to Fombrun (2001) namely credibility, reliability, trustworthiness and responsibility.

Hubbard & Beamish (2011) argue that the type of organization effect on performance measurement. According to Wheelen & Hunger (2015), performance is the end result of an activity compared to the goals set in the strategy formulation process, which relates to profitability, market share and cost reduction.

Meanwhile, Downing (2017) measure hospital performance by applying big data annalistic. They developed a new approach to characterize hospital performance that highlights the similarities and differences between hospitals and identifies general patterns of hospital performance. The performance of a hospital is measured through characteristics that include the level of neighbourhood, Process, Experience, Value, Safety, Surgery Readmission and Mortality. According to Sabarguna (2004), the quality of hospital services can be seen in terms of the following aspects: clinical aspects (doctors services, nurses and technical medical related), aspects of efficiency and effectiveness of service, patient safety and patient satisfaction. Some indicators to determine the quality of hospital efficiency include: bed utilization, utilization of energy, utilization of medical support and finance. Bed-side indicators that easy to see are BOR/Bed Occupancy Ratio, BTO/Bed Turn Over, ALOS/Average Length of Stay, TOI/Turn over Interval. BOR (Bed Occupancy Ratio) increases which means the percentage of bed use goes up, BTO (Bed Turn Over) tends to increase which means the frequency of bed usage increases and TOI (Turn Over Interval) decreases which means less empty bed day.

In this study, hospital performance is measured by dimensions of BOR (Bed Occupancy Ratio), service operation performance and profitability.

Based on the literature review, it can be arranged the hypothesis as follows:

H1: Institutional partnership and hospital reputation have an effect on hospital performance either simultaneously or partially.

The method used in this study is a quantitative research method that is a research that demands a lot of use of numbers, ranging from data collection, interpretation of the data and the appearance of the results. The unit of analysis in this study is hospital in West Kalimantan. The unit of observation is the management of the hospital. The observation is done in a cross section/one shoot time horison namely in 2017. Based on this understanding, the population in this research is hospital industry in West Kalimantan which amounts to 36 public hospitals of various classes (B, C and D). Due to the small population size, the sampling method is conducted by census. The following Table 2 shows the number of hospitals with the following classes in the study area.

The analysis to answer the purpose of research, using Partial Least Square that is one of the multivariate techniques that check the series of dependency relationship between latent variables.

Goodness of Fit-Outer and Inner Model

To check the convergent validity, each latent variable?s Average Variance Extracted (AVE) is evaluated. From Table 3, it is found that all of the AVE values are greater than the acceptable threshold of 0.5, so convergent validity is confirmed.

The Table 4 show the result of measurement model for each dimension on indicators. 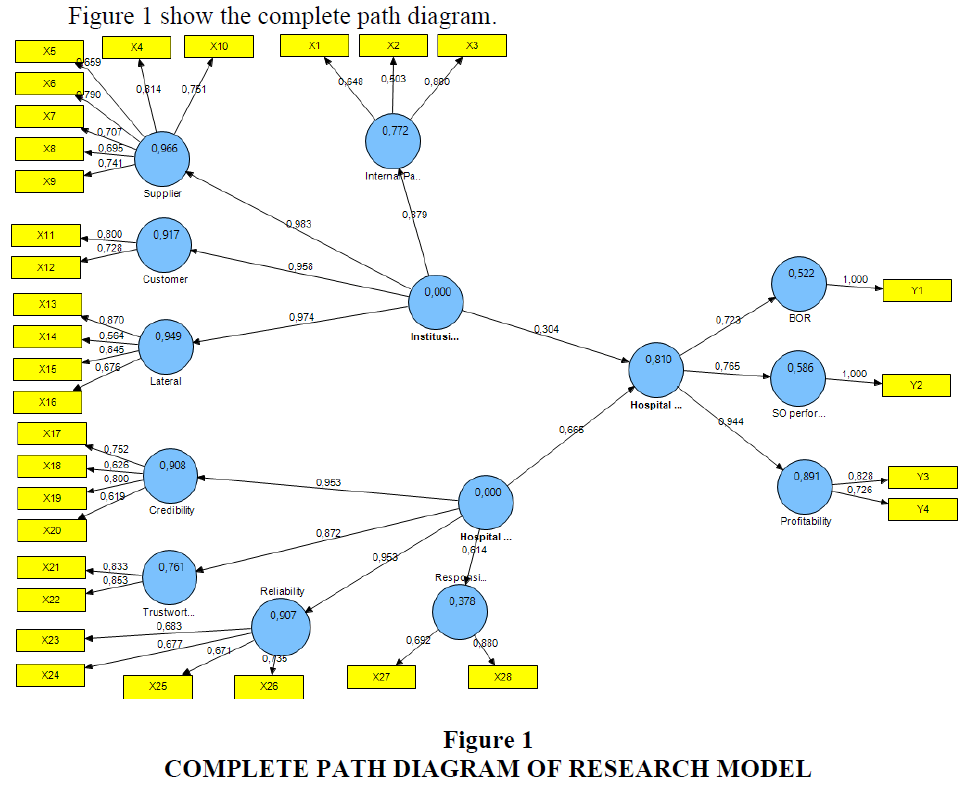 Based on the research framework, then obtained a structural model as follow:

Below is the result of simultaneous testing of hypothesis:

Based on the Table 5, it is known that within the degree of confidence of 95% (?=0.05) simultaneously there is the influence of Institutional Partnership and Hospital reputation significantly to Hospital Performance, amounted to 81%, while the rest of 19% is affected by other factor did not examined.

Below is the result of partial testing of hypothesis:

Based on hypothesis testing result, will describe the Research Model Finding in Figure 2. 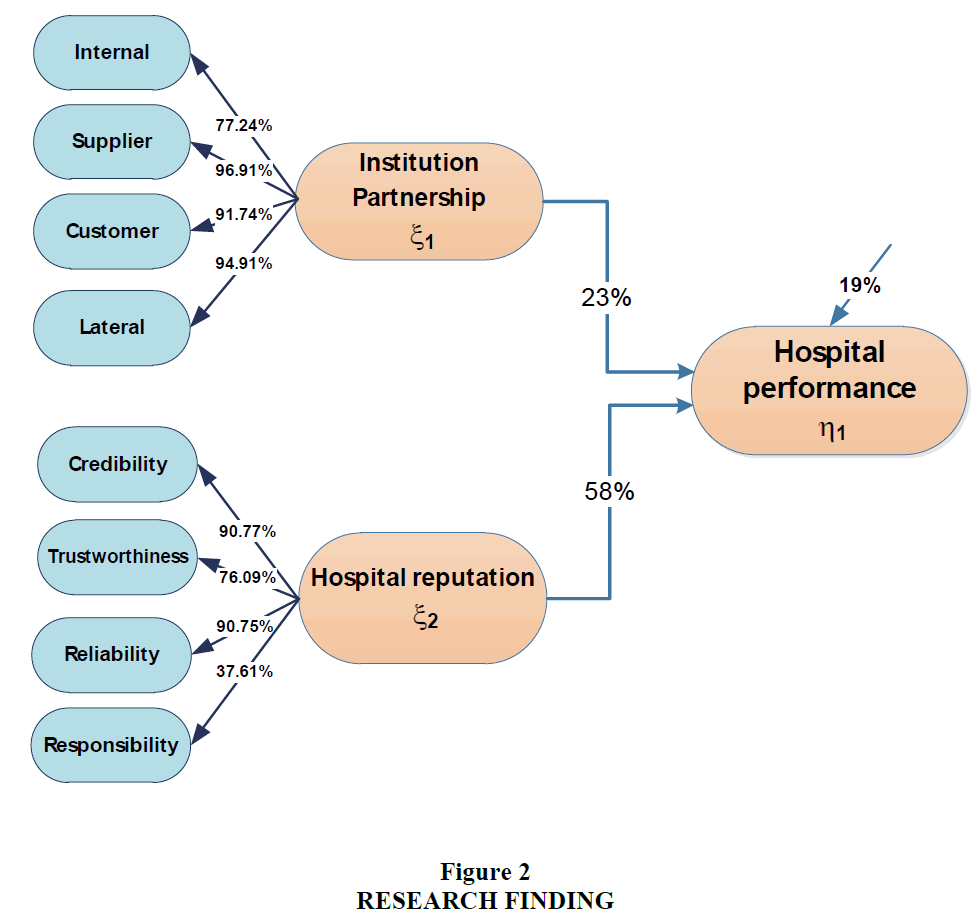 Based on the results of this study it is suggested to the hospital management to improve the reputation development that is accompanied by the development of institutional partnership as an effort to improve the performance. The increase in reputation is mainly realized by increasing the credibility of hospitals supported by increased reliability, trustworthiness and responsibility.

From the findings of this study can also be the preparation of the premise to conduct a research related to hospital performance, both with the same variables and population as well as by taking a wider population.