A2 Economic Education, The Teaching of Economics.

The Economist Magazine (2016) labeled the monetary trilemma as one of six big ideas that explains how the world works. Feenstra and Taylor (2014 p. 457) state that the monetary trilemma “is one of the most important ideas in international macroeconomics.” The monetary trilemma or impossible trinity as economists sometimes call it, states that policy makers cannot simultaneously achieve exchange rate stability, pursue an independent monetary policy and allow free capital flows with other economies. Mundell (1961, 1962, 1963; Fleming 1962; McKinnon 1963) wrote path-breaking articles related to the issue of the trilemma. Obstfeld and Taylor (2017) examine the history of how governments have dealt with the monetary trilemma and relate their discussion to the desire by governments to maintain domestic financial stability, pursue autonomous financial policies and integrate domestic financial markets with global financial markets.

Figure 1 illustrates the monetary trilemma. The vertices represent desired goals of a monetary system. Any two vertices and the line between them represent the mix of open-economy results from attempting to achieve the two desired goals. Also, Krugman, Obstfeld and Melitz (2015, p. 547-548) for an explanation of a diagram similar to Figure 1 in the present paper. 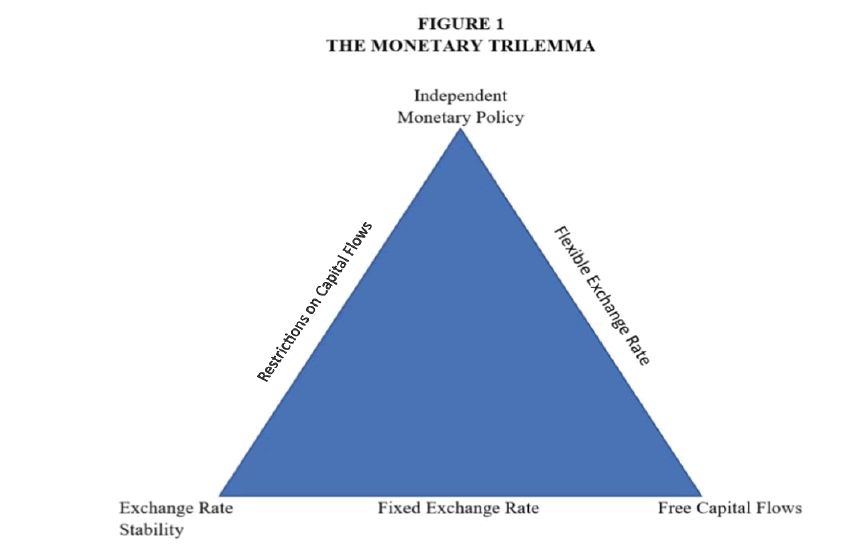 Most undergraduate textbooks in International Economics do not discuss the monetary trilemma, perhaps because the authors believe the concept is too difficult for undergraduate students. The undergraduate International Economics textbooks that do explain the trilemma use models that go beyond the tools covered in courses in Principles of Macroeconomics. Feenstra and Taylor use the IS-LM-FX model to explain the monetary trilemma. Equilibrium in the goods market (IS) and equilibrium in the asset market (LM) are described as functions of the interest rate and income. Equilibrium in the foreign exchange market (FX) takes place where the domestic interest rate equals the world interest rate. Salvatore (2016) uses a comparable model to Feenstra and Taylor, the IS-LM-BP model, to explain the trilemma. The IS and LM curves are defined the same way as in Feenstra and Taylor and the BP line shows combinations of interest rate and income where there is neither a deficit nor surplus in the economy’s balance of payments. Krugman, Obstfeld and Melitz (2015) develop the DD-AA model in which they examine equilibrium in the goods market (DD) and equilibrium in the asset market (AA) as functions of the exchange rate and income to explain the trilemma. Van Marrewijk (2012) uses a model relating an economy’s current account to the economy’s real exchange rate to examine the trilemma. Sawyer and Sprinkle (2015) discuss the trilemma in the context of currency unions. Carbaugh (2015) introduces the monetary trilemma without having a formal model to explain it.

Some textbooks in Intermediate Macroeconomics examine the monetary trilemma as part of their analysis of open economy monetary and fiscal policies. Mankiw (2016) does so using an IS-LM model with the exchange rate and income on the axes. Other textbooks in Intermediate Macroeconomics that cover the trilemma includes Dornbusch, Fischer and Startz (2014), Hubbard, O’Brien and Rafferty (2014), Jones (2018) and Mishkin (2012).

The purpose of the present paper is to illustrate the monetary trilemma in a model that uses tools developed in Principles of Macroeconomics.

The model in the present paper considers the market for products (goods and services), the money market and the foreign exchange market, which is broken down into the financial account and the current account. Figure 2 below illustrates the model. 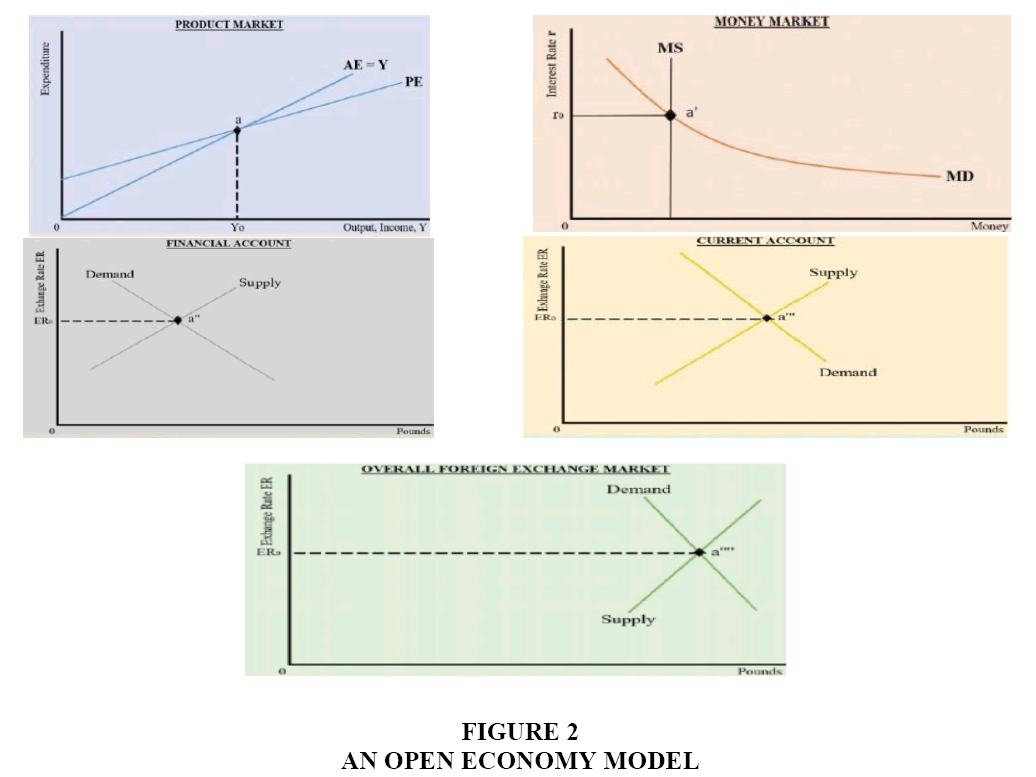 Let the central bank increase the money supply, which lowers the interest rate. Planned investment rises, which raises planned expenditure and income. The increase in income raises money demand, causing the interest rate to rise somewhat, which causes planned investment and planned expenditure to decline somewhat. As income rises, consumption and imports rise along a given PE line. 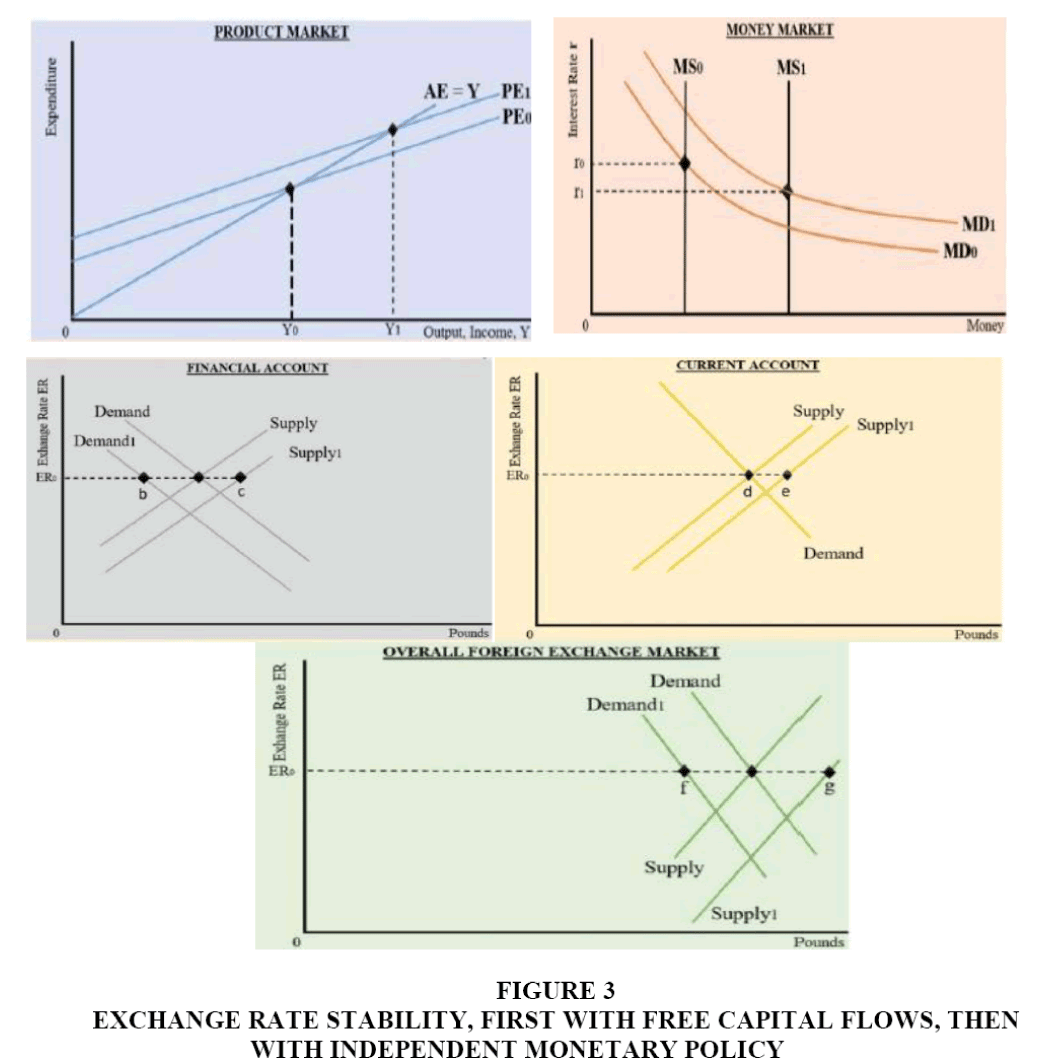 One change occurs in the central bank’s balance sheet. When the central bank increased the money supply, it bought government bonds in the open market. When it intervened on the foreign exchange market, it sold foreign reserves (dollars) and bought pounds. Hence, on its balance sheet (not provided in the paper), the increase in the value of government bonds is just offset by the loss in the value of foreign reserves, both measured in pounds.

Figure 3 can be used also to illustrate the need for financial account restrictions if policy makers wish to pursue monetary policy yet keep the exchange rate fixed. Given the initial increase in money supply to MS1 in Figure 3, at the initial exchange rate ER0 there is an excess quantity supplied of fg pounds in the overall foreign exchange market. If all current account transactions are to proceed and the monetary expansion is not to be reversed, then capital flows must be restricted to lead to a balance between the quantity supplied of and quantity demanded for pounds in the overall foreign exchange market at exchange rate ER0. Since there is an excess quantity supplied of pounds on the overall foreign exchange market, policy makers presumably would place restrictions on converting pounds to foreign currency (dollars in this case) on financial account transactions.

The lower interest rate leads to a net capital outflow, which causes the demand for pounds to decrease and the supply of pounds to increase on the financial account. The increase in imports leads to an increase in the supply of pounds on the current account. The result is a depreciation of the pound. The depreciation raises exports and raises production in import-competing industries since imports decline. As net exports rise, planned expenditure rises again, which further raises income, consumption, imports and money demand.

The net results of the expansionary monetary policy are given in Figure 4 below. The money supply increases to MS2 and money demand increases to MD2. The interest rate decreases to r2 and planned investment rises. Planned expenditure rises to PE2 and income rises to Y2. The pound depreciates to ER2. 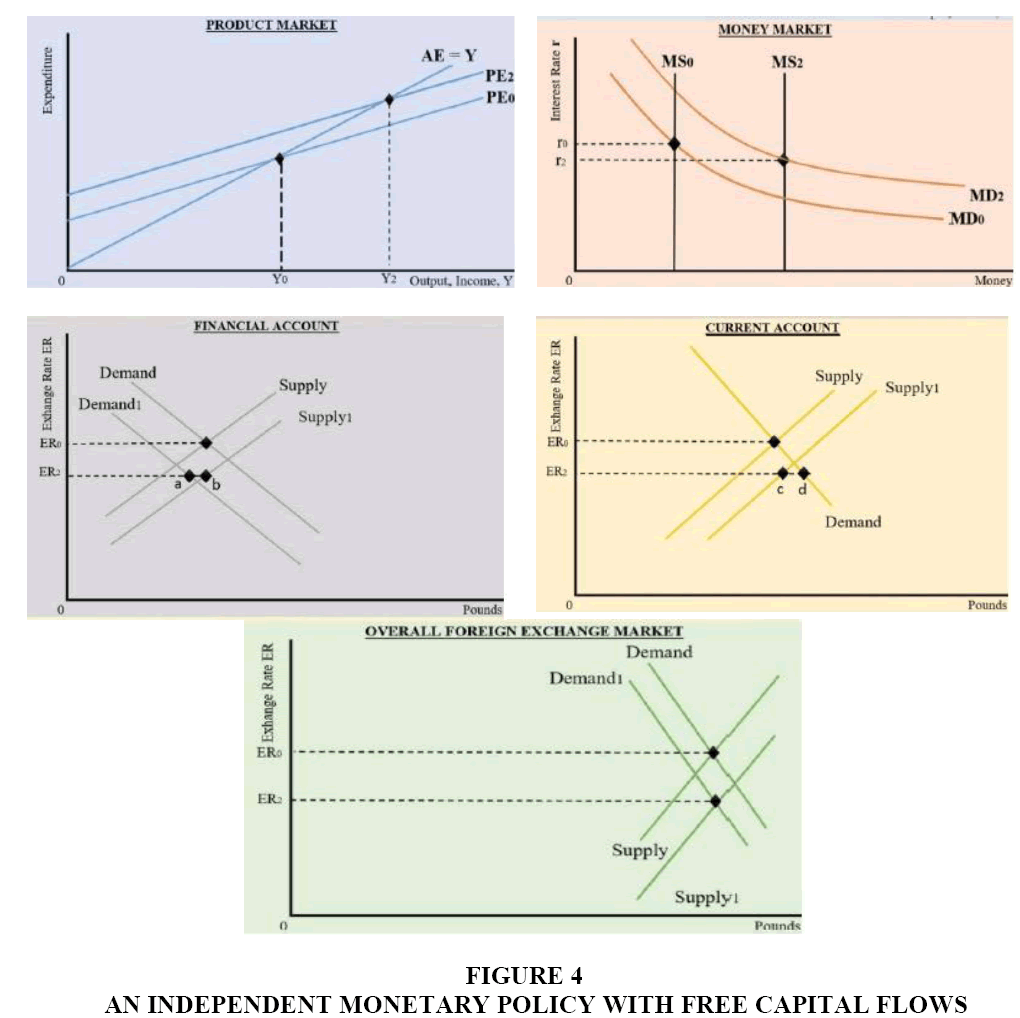 As an aside, expansionary monetary policy and free capital flows have an ambiguous effect on imports, since the depreciation reduces imports and the higher income raises imports. Imports could rise enough to more than offset the increase in exports; hence, the effect on the current account is also ambiguous; i.e., it could move into deficit, move into surplus or stay balanced. The effect on the financial account is ambiguous, since any deficit in one account is offset by a surplus in the other account. In Figure 4, the financial account shows deficit of ab pounds, which equals the current account surplus of cd pounds.

The present paper complements the paper, “Open Economy Keynesian Macroeconomics without the LM Curve,” by Bajo-Rubio and Diaz-Roldan (2016) in this journal. Their paper analyzes monetary policy under either a flexible exchange rate or a monetary union (not a fixed exchange rate). They observe that the “impossible trilogy,” as they label it, requires policy makers to forgo fixed exchange rates given a desire to pursue monetary policy and allow freedom of capital flows. Hence, they analyze monetary policy under flexible exchange rates using their pedagogical framework. Then building on the work of Obstfeld & Rogoff (1995) and arguing that relatively few countries maintain fixed exchange rates for long periods of time Bajo-Rubio and Diaz-Roldan focus their framework on policies (monetary and fiscal) and macroeconomic shocks on countries belonging to a currency union. The pedagogy in the paper by Bajo-Rubio & Diaz-Roldan is targeted to professors offering courses in Intermediate Macroeconomics. In the present paper, though, the pedagogy is targeted to professors offering courses in International Economics. Note that the model in the present paper can also be used to illustrate the effects of fiscal policy under flexible and fixed exchange rates.

Finally, the other five big ideas that explain how the world works identified by the Economist, in addition to the Mundell-Fleming trilemma, are the Nash equilibrium in game theory, Hyman Minski’s financial instability model, the Stolper-Samuelson international trade theorem on tariffs and wages, George Akerlof’s analysis of asymmetric information in markets and John Maynard Keynes idea on multipliers associated with fiscal policy.