We employ the classic concept of deadweight loss in economics to quantify social welfare, which is an integral component of social sustainability from a supply chain perspective. Consider an industry consisting of two supply chains. Each channel produces and distributes a competing product. Each channel can be either decentralized or integrated. In this stylized model, we study social welfare issue. Specifically, we investigate how demand asymmetry, differentiation and degree of vertical integration affect social welfare. Key findings are: (1) Monopoly does not always hurt social welfare; (2) having equally matched competing channels may or may not be socially beneficial, depending on industry configurations.

When firms are concerned with their respective supply chains alone, it is probably a good idea to integrate the competing channels. However, when multiple channels are competing with each other, how will the integration of individual channel affect social welfare? Will consumers be better off or worse off? These questions largely remain unanswered and are little explored in literature. The intent of this paper is to investigate the social welfare issue in an industry consisting of two competing channels.

We calculate equilibrium prices, quantities and deadweight losses for different industry configurations and then study the issue of social welfare as well as investigate the impact of demand asymmetry, differentiation and vertical integration.

Our key findings are: (1) Monopoly does not always hurt social welfare; (2) having equally matched competing channels may or may not be socially beneficial, depending on the industry configurations.

The remainder of this paper is organized as follows. Section 2 reviews related literature. Our model, as well as all optimal and equilibrium results of each configuration, is described in Section 3. Section 4 analyses results from Section 3. The paper is concluded in Section 5.

Many recent research topics on sustainable supply chain are introduced in the special issue in the Journal of Cleaner Production (edited by Seuring, Sarkis, Müller, & Rao, 2008).

The industry configurations studied in this paper are similar to those in McGuire & Staelin (1983). They find that when retail competition between two substitutable products is sufficiently high, two manufacturers prefer selling via wholesale price contract to integrating their respective channels. Moorthy (1988) later identified conditions on the game rule and demand function in order for decentralization to be an equilibrium strategy. A more recent work, Wu & Mallik (2010), extended this line of research to industry configurations in which retailers can carry competing products. This stream of research focuses on strategic interactions between and within competing channels. They have shown that all the industry configurations studied in this paper (DD, ID/DI and II) can be equilibrium gaming results under certain conditions. Built upon these results, we can reasonably assume that the industry configurations are exogenously given and focus on the issue of social welfare in this paper.

O’Brien & Shatter (1994) considered a market in which a single manufacturer produces a product and sells it to two competing retailers. They examined the welfare effects of Robinson-Patman Act and found that forbidding discriminatory discounts leads to all retailers paying higher prices and thus charging higher prices in retail markets. Although they studied the welfare issue, the differences between their work and ours are apparent. We consider two manufacturers and two competing products. Since each manufacturer has only one distribution channel, wholesale price discrimination issue does not exist in our model. We, instead, examine the impacts of vertical integration, demand asymmetry and differentiation on social welfare.

Inderst & Shaffer (2009) considered a monopolistic supplier with two asymmetric retailers. They examined the optimal discriminatory two-part tariffs of the supplier and found that larger retailer obtains lower wholesale price, which increases allocative efficiency. The demand asymmetry in our model is analogous to the retailer asymmetry in Inderst and Shaffer (2009). Instead of examining the effects of discriminatory pricing, which is not possible in our setting, we consider two manufacturers, each with a competing product and a single channel. Social welfare is then studied with vertical integration.

As mentioned earlier, the DD, DI/ID and II industry configurations are assumed to be exogenously and they have been proven to be equilibrium outcome. This assumption simplifies the analyses and allows us to stay focused on studying social welfare issue. In addition, we will use the fully centralized configuration as the benchmark case, denoted by B.

where qi represents the demand for product i, pi is the retail price of product i. Note that ai describes the demand potential of product i. Without loss of generality, we assume that a1>a2, which captures demand asymmetry. Demand asymmetry is similar to retailer asymmetry in Inderst and Shaffer (2009). The market potential of product 1 (a1) is larger either because product 1 is more superior or because channel 1 is more efficient. Furthermore, we let a2=ka1, where k is a scalar between zero and one. By exploring the impact of k, we can understand how demand asymmetry affects social welfare.

Similarly, the total deadweight loss, L, equal to the sum of L1 and L2 (deadweight loss in the market of product 2) is as follows:

Equipped with Equation (3), we can examine how demand asymmetry, differentiation (or degree of horizontal competition) and vertical integration affect social welfare.

For any given industry configuration, we use a non-cooperative game to examine the equilibrium prices and quantities. In the DD configuration, two manufactures determine their respective wholesale prices first. And then two retailers select their respective retail prices to maximize their own profits. In mixed configurations, ID for instance, the decentralized manufacturer chooses its wholesale price, w2, first. Next, note that there is no wholesale price in a vertically integrated chain. Channel 1 (vertically integrated chain) and the decentralized retailer will decide their respective retail prices. In the II configuration, two chains set their respective retail prices. At each stage of the game, all the decisions are made independently and simultaneously. This assumption is standard in conventional non-cooperative games. To simplify analyses, we assume that the unit production and retailing cost is zero. Unit production and retailing cost does not qualitatively affect the results of this paper.

We solve the above games backward. It is easy to verify that a unique equilibrium exists in each game. The equilibrium results are summarized in Tables 1-4 below.

In this section, we look into the effects of vertical integration, differentiation and demand asymmetry on deadweight losses.

Proposition 1 implies a few interesting results. The most significant result is that

could be less than

depending on the values of k and b. Although horizontal integration seems to hurt social welfare since

Generally, vertical competition drives retail price up whereas horizontal competition drives price down. Therefore, it is not surprising to see deadweight losses decrease as degree of vertical integration increases. With higher degree of vertical integration, there is less vertical competition. In the benchmark case of monopoly, both vertical and horizontal competition is eliminated. But the competing nature between two products remains, in the form of internal cannibalization. This may be the reason why the monopoly could possibly result in less deadweight loss than the DD, DI and ID configuration, but not the II configuration.

Next, we look into the effect of k on social welfare. Recall that

1 That is, channel 1 is more dominant in a market than channel 2. The larger the k is, the more equal the two channels are. However, as k increases, the market size for product 2 also increases while the market size for product 1 remains the same. It is not a surprise to see all the absolute deadweight losses, as defined in Equation (3), increase in k. It is also obvious that the absolute consumers’ surplus increases in k. A much more important result will be about how the relative deadweight losses change as k changes. To that end, we define the area under the demand curve in Figure 1 to be the total welfare associated with market for product 1, denoted by TW1. From Figure 1, TW1 is the sum of consumers’ surplus in market 1, channel 1’s profits and deadweight loss L1. Algebraically,

We further define the relative deadweight loss to be as follows:

From the definitions of

, we have the following:

Proposition 2 below summarizes how relative market size (k) will affect deadweight losses and social welfare both in absolute and relative sense.

It appears that the industry structure, in terms of both vertical and horizontal competition, plays a crucial role in how demand asymmetry between the two channels (as described by k) would affect social welfare. Proposition 2 indicates that we must be extremely careful to examine the possible welfare effects of any anti-trust case: Sometimes equally matched opponents are socially beneficial; some other times they are not.

This paper adopts a stylized model of an industry consisting of two competing channels. Each channel, either vertically integrated or decentralized, produces and sells one of the two competing products. Under such a framework, we study the issue of social welfare. In particular, we look into how vertical competition, horizontal differentiation and demand asymmetry would affect social welfare. The key contribution of this work is as follows.

First, we have found that: (i) Vertical integration (or lack of vertical competition) is, in general, socially beneficial; and (ii) horizontal integration (or lack of horizontal competition), against common belief, does not necessarily hurt social welfare. Indeed, as more competing channels are vertically integrated, the deadweight losses decrease; and thus social welfare increases. This result may not be very surprising. However, a pure monopoly, defined as an industry controlled by one entity, could be more socially beneficial than many other industry configurations. In fact, depending on the degrees of demand asymmetry (described by k) and channel differentiation (described by b), the monopoly could result in less deadweight loss than the DD, ID or DI configurations, in which there is higher degree of both horizontal and vertical competition. One exception is, regardless of the values of k and b, the II configuration is always the most socially beneficial among all five industry configurations considered.

Our paper has identified many interesting observations; it is not the purpose of this study to deeply investigate the causes. Due to the complexness of the situations where horizontal and vertical competition coexists, it is probably worthwhile further investigating the issues and seeking explanations in separate research projects. Furthermore, it will be very intriguing to model an actual industry and study how vertical and horizontal competition would actually affect social welfare. 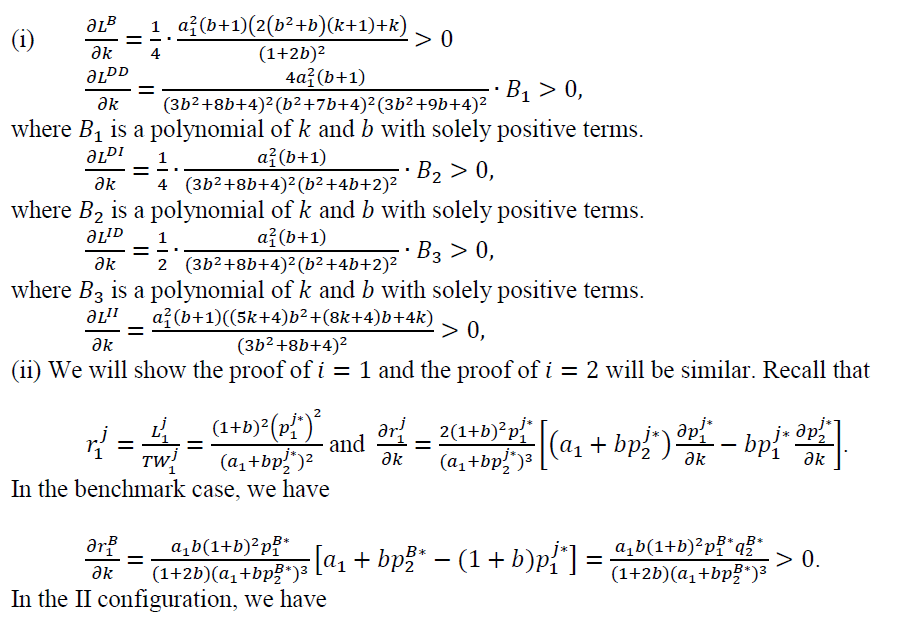 It is equal to zero because

which comes from the 1st-order conditions of the profit maximization problem of each channel.

To prove the result with respect to the DI and DD configurations, we define the following to simplify all the expressions: 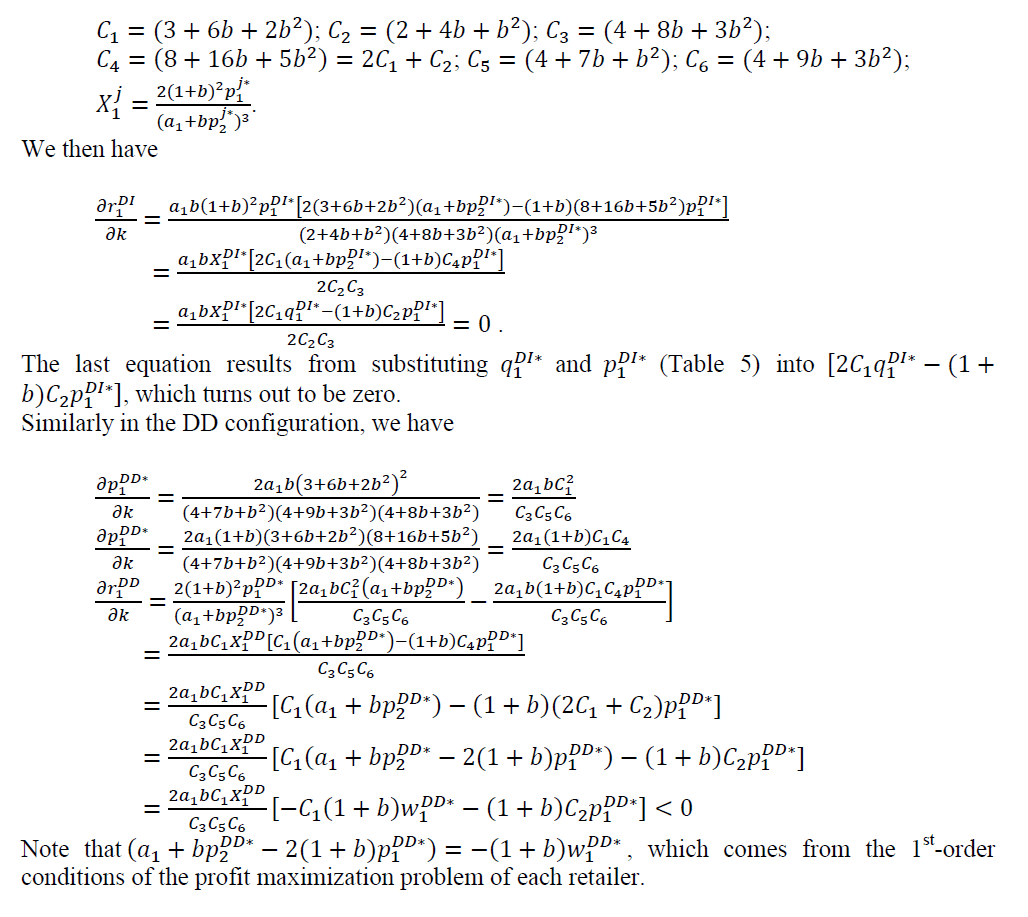 Hutchins, M. & Sutherland, J.W. (2008). An exploration of measures of social sustainability and their application to supply chain decisions. Journal of Cleaner Production, 16(15), 1688-1698.