An Empirical Study of the Dimensions of Entrepreneurial Marketing

Entrepreneurial Marketing (EM) would help organisations remain relevant and competitive in the world full of uncertainties brought about by advances in science and technology on the one hand and shrinking product and business life cycles on the other. EM has been evolving over the last three decades, But there has not been a consensus on the definition of EM. A few of these definitions have suggested the dimensions of EM. The empirical investigations have not confirmed the dimensions of these EM definitions. The purpose of this study is to empirically verify the six dimensions of EM as proposed by Kilenthong, Hills and Hultman in the Indian context. Structural Equations Modelling was used to analyse. Results showed that five factors fit well in the model.

The advances in knowledge, science, and technology have helped organisations come out with better solutions for customers at faster rates. It has also helped the customers by proliferating information to become more knowledgeable about the options and alternatives available to them and hence more demanding. While product life cycles and business life cycles are reducing, organizations have to operate in conditions where changes are dynamic, entry barriers are reducing, competition is increasing (including solutions from other industries), ability to forecast medium to large term becoming more difficult, shareholder pressures are increasing (and with many having short term objectives). As a result, the organisations would have to become even more proactive, innovative, and agile than ever before in highly uncertain market conditions, and entrepreneurial marketing (EM) could help organisations remain relevant and competitive (Alqahtani & Uslay, 2018).

While there is an agreement that there is a difference between traditional marketing and EM (Hills et al., 2008), a consensus on the definition of EM is yet to see the light of the day. The EM concept “has been used in various ways, and often somewhat loosely” (Morris et al., 2002). In the initial stages, EM was linked to the marketing efforts of small organisations/ small and medium enterprises (SMEs) (Hill & Wright, 2000) and by some to resource-constrained organisations (Morris et al., 2002); the scope has increased subsequently (Hills & Hultman, 2013). While some looked at EM from the lens of marketing for new and/ or small ventures, others looked at EM from a qualitative perspective of marketing with an entrepreneurial perspective (Miles & Darroch, 2006). Though entrepreneurial Marketing has evolved as a field in the last 30 years (Collinson & Shaw, 2001), it is still under development (Hills & Hultman, 2011). EM is as applicable to organisations of considerable size (Lam & Harker, 2015) or for that matter to any size (Kraus et al., 2010) and in either B2C or B2B contexts (Whalen et al., 2016; Yang & Gabrielsson, 2017).

Some of the definitions of EM suggested the dimensions of entrepreneurial marketing (Morris et al., 2002; Jones & Rowley, 2009; Mort et al., 2012; Kilenthong et al., 2015). Based on each definition, EM has different dimensions associated with it. Most of the EM models are theoretical constructs, and some researchers have tried verifying them in select countries, in specific conditions.

The Jones & Rowley framework (2009) was built on the SME context, and the Mort et al. framework (2012) was built in the context of born global firms. The Kilenthong, Hills and Hultman framework was universal and built on the model proposed in 2006 by Hills and Hultman. Earlier research treated entrepreneurial orientation (EO) as a dimension of EM. Based on their findings, Kilenthong et al. suggested that rather than looking at EO as a dimension, it should be considered as a separate construct that is an antecedent of EM behaviour (Kilenthong et al., 2015).

Though there have been significant advances in the area of entrepreneurial marketing, there has not been a consensus on what are the dimensions of EM, the drivers, and the measurement included. The drivers vary because there is no one clear definition of EM. Some of the popular definitions and dimensions are described below.

One of the pioneering definitions of Entrepreneurial marketing is

In 2009, a framework with fifteen dimensions of EM was developed (Jones & Rowley, 2009). These were derived from the SME levels of entrepreneurial orientation (EO), market orientation (MO), innovation orientation (IO), and customer orientation (CO). This is referred to as the EMICO framework.

In 2018, researchers suggested that for organisations that are operating in highly competitive and uncertain environments, EM would be the key to help them “remain relevant, competitive and healthy” (Alqahtani & Uslay, 2018). Based upon their study of various EM perspectives, service-dominant logic, and the effectuation theory, they proposed a model of EM which had eight dimensions. The eight dimensions proposed by them are innovation, proactiveness, value co-creation, opportunity focus, resource leveraging, networking, acceptable risks, and inclusive attention.

Though there is no single definition of EM, most are based on the definition proposed by (Morris et al., 2002). Although scholars have researched EM, there is no consensus on the dimensions of EM (Kilenthong et al., 2015).

There have been concerns raised that the premises of EM have not been “empirically tested and replicated to test for generalizability” (Eggers et al., 2018).

Researchers tried to empirically test the seven dimensions based on the definition proposed by Morris et al. (Kocak, 2005; Schmid, 2012; Fiore et al., 2013). While Kocak researched small organisations, Schmid researched small and medium enterprises. Kocak’s research was conducted in Turkey, and instead of the seven dimensions, the study confirmed five. Schmid's research was in Austria and could confirm only four dimensions. Fiore et al. has studied US organisations and could confirm only four.

Based on a review of published empirical research papers, it was suggested that EM had six dimensions (Kilenthong et al., 2015). The six dimensions were “Growth orientation, opportunity orientation, total customer focus, value creation through networks, informal market analysis, and closeness to the market.”

This study builds on previous studies of entrepreneurial marketing and applies in the Indian context.

The objective of this study was to investigate the six dimensions model of EM (Kilenthong et al., 2015) in the Indian context. The study used the primary source of data collection. This was achieved by the design and administration of a targeted survey to entrepreneurs in India. A formal questionnaire developed by Kilenthong et al. (2015) was used for the structured data collection. Widely used and accepted scales were used in the questionnaire. The survey items included a range of questions to gather necessary information about the entrepreneur. It also captured information about the enterprise. Structured, personal in-home interviews were conducted using survey questionnaires so that the respondents were interviewed face to face in their home/ office.

Most questions had fixed alternative questions that would require the respondent to select from a predetermined set of responses. Most of the measures in the questionnaire were self-reported perceptual measures of the constructs. The itemised rating scale, a Likert scale (non-comparative scale/ metric scale), was used. The respondents had to indicate the degree of agreement or disagreement with each of the series of statements. A five-point Likert scale was used.

The target population of this study was the Indian owner/ founder/ partner/ major shareholder of the organisations (referred to as the business owners) that have been in existence for a different number of years. The precondition or eligibility of the survey was that the enterprise should be in operation for a year.

Structured equation modelling was used to analyse the findings.

While the first few questions of the questionnaire captured the characteristics of the entrepreneur, the subsequent ones captured information relating to the six dimensions of EM.

Confirmatory factor analysis (CFA) was done to verify the six dimensions model of EM. The analysis of data was done using structured equation modelling (SEM) with the help of AMOS (version 21) software. There are several fitness index indicators to help in the analysis. After deleting the factor loadings below 0.5, the measurement model, as shown in Figure 1, was built. The fitness index indicators are as shown in Table 5. 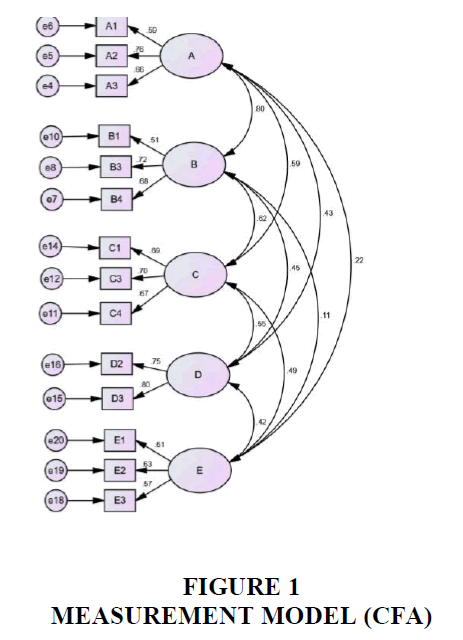 The values of the fitness index for the model are within the acceptable range. Table 6 shows the composite reliability (CR) and Cronbach alpha for all the constructs in the final model.

The Cronbach alpha for all was found to be above 0.6, which is acceptable. The average value extracted (AVE) for all was above the acceptable figure of 0.4 (Adcock & Collier, 2001).

The field of entrepreneurial marketing is an emerging field, and so there are several definitions of EM. Researchers have proposed different models to explain the dimensions of EM. In this work, the researchers wanted to empirically verify the six-factor dimensions proposed by Kilenthong et al. in 2015 in the Indian context. The study used Structural equation modelling (Amos V 21) to verify the validity and reliability of the model. While it did not accept the six dimensions, this study accepted the five factors, namely – growth orientation, opportunity orientation, total customer focus, value creation through networks and informal market analysis. The sixth, but not accepted dimension was closeness to market. For the five dimensions of EM, the AVE was higher than the acceptable level of 0.4, convergent validity was established. The various fitness index values were above the acceptable limit, proving the construct validity. The internal reliability was also acceptable as the values of Cronbach alpha was acceptable. The composite reliability was also acceptable.

Jones, R., & Rowley, J. (2009). Presentation of a generic ?EMICO? framework for research exploration of entrepreneurial marketing in SMEs. Journal of Research in Marketing and Entrepreneurship, 11(1), 5-21.

Kocak, A. (2005). Developing and Validating a Scale for Entrepreneurial Marketing. In G. E. Hills, R. D. Teach, J. Monllor, & S. Attaran (Ed.), Proceedings of the Global research symposium on marketing and entrepreneurship (pp. 213-228). The University of Chicago at Illinois.