The economy of India is a developing-mixed economy. It is the world’s seventh largest economy by nominal GDP. GDP is a very strong measure to the economic health of a country and it reflects the sum of total of the production of a country and as such comprises all purchases of goods and services produced by a nation and services used by individuals, firms, foreigners and the governing bodies. It is used as an indicator by almost all the governments and economic decision-makers for planning and policy formulation. Historically, India has classified and tracked its economy and GDP in three sectors: agriculture, industry, and services. The study tries to investigate the analysis of relation between GDP growth and sectoral implication in Indian context. The study used secondary data for the period 2005 to 2018. GDP Data was collected from the World Bank data base. India Sectoral Index Data was collected from the NSE-India Web-site. First, the GDP was decomposed into Trend, Seasonal and Random components. Next, GDP was forecasted using ARIMA coefficients after determination of suitable number of lag period using the ADF test as well as the PACF diagrams. Finally, correlation between Sectoral growth and GDP growth was computed to verify whether GDP growth can be used as a predictor of any of the Sectoral Index growth rates. The results indicate that the GDP growth has seasonal component associated with it and a 4 quarter lag serves as a good measure to forecast the GDP growth. Further the study shows poor correlation between all the selected indices and the growth rate in the GDP as well as lagged GDP (by 1 quarter).

The current study is focused on studying the analysis of relation between Gross Domestic Product (GDP) growths in the Indian context. The section begins with current scenario of the GDP growth and continues to explain all the sectors covered in the analysis. The dependent and independent variables considered are discussed in detail. GDP is the monetary measure of the market value of all the final goods and services produced in a specific time period, often annually or quarterly. GDP (nominal) per capita does not, however, reflect differences in the living and the inflation rates of the countries; therefore using a basis of GDP per capita at Purchasing Power Parity (PPP) is arguably more useful measuring GDP in a country according to Leo & Ayse (2007) in their study of the Turkish economy. Historically, India has classified and tracked its economy and GDP in three sectors: agriculture, industry, and services. Agriculture includes crops, horticulture, milk and animal husbandry, aquaculture, fishing, sericulture, aviculture, forestry, and related activities. Industry includes various manufacturing sub-sectors. India's definition of services sector includes its construction, retail, software, Information Technology (IT), communications, hospitality, infrastructure operations, education, healthcare, banking and insurance, and various economic activities according to the Economic Survey of India (2018).

Singh, et al. (2010) studied the relationship between credit Growth in India in the last few decades, have used unit root test, and Augmented Dickey Fuller (ADF) test, studied the relationship between credit growth and GDP growth in different sectors of the economy, in order to ascertain long term co- integration relationship between Credit and GDP. Hussin & Saidin (2012) examined the contribution of economic sectors to growth in India. This study used secondary data and ascertained the contribution of 3 economic sectors including agriculture, manufacturing and service sectors and studied the contribution to the economic growth in India. (Jain, et al., 2009) investigated the impact of various macro-economic factors on GDP components. This study used secondary data from Securities and Exchange Board of India (SEBI) and the Planning Commission Report of 2013. The study found significant effect of FDI, net FII equity and import on GDP components. The percentage share of the agriculture, in the total GDP has declined. On the contrary, share of the services in the total GDP had increased, the study found. Prochniak (2011) analyzed the impact of the development and stability or the financial sector on economic growth. This study shows the estimation of the regression equations of where the GDP growth rate is regressed against a number of factors including a variable representing financial sector and several variables. The paper analyzed the theoretical and aspherical relationship between the financial system and economic growth attempting to answer the question on what level of financial system development positively influences GDP dynamics.

Motivation for the Current Research

The authors were curious to investigate the nature of the GDP function in India. Specifically, the question was whether the GDP could be broken into the components of Trend (long term), Seasonal (repetitive pattern after “N” quarters). The authors also wanted to verify whether the use of a time-series tool such as Auto Regressive Integrated Moving Average (ARIMA) would yield statistically significant coefficients. The contribution to the literature is that of isolation of the number of Lag periods as well as the ARIMA Coefficients, which can be useful in prediction of GDP in future years.

The aim of this research is to identify the three components of GDP (Trend, Seasonal and Random) and arrive at a predictive formulation for the forecast of future values of the GDP with the help of Statistical Tools such as the ADF, Partial Auto Correlation Function (PACF) Diagram and finally the ARIMA. All these tools can be found in the python programming environment with the help of packaged libraries such as statsmodels, scipy, numpy and matplotlib.

First, the raw GDP data for India was obtained from the Quandl Database. This data was then imported into statistical package within python to decompose into the three components of Trend, Seasonal and Random Components. Next, an Augmented Dickey Fuller (ADF) Test was run on the GDP Data in order to find the number of Lags. In order to corroborate the finding from the ADF Test a PACF Diagram was constructed in order to finalize the number of Lags to be used.

Finally, the ARIMA tool was used in order to predict the coefficients with the number of Lags suggested in the PACF Diagram. The ARIMA coefficients were tested for Statistical significance by observing the p-values. Finally the Forecasted GDP was arrived at by using the ARIMA forecast so developed and the Forecasted GDP was plotted against the Actual GDP for the time period being used in the study.

Figure 1 shows that the GDP can be broken into three components. The long term Trend is almost linear and can be forecasted. The Seasonal Trend is repetitive and fluctuates in a manner such that it repeats every 4 quarters (1 Year), leading to an assumption that the number of lags could possibly be 4 (quarters). Finally, it is evident that the Residual component is Random and cannot be forecasted. 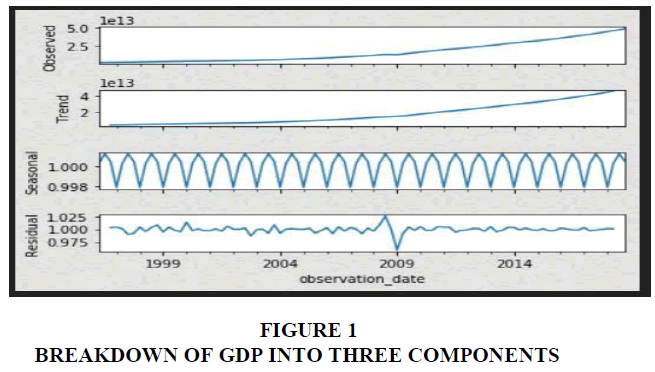 Table 1 shows that there is time dependency of GDP across quarters, since the Test Statistic and the Result of the ADF Test indicate that the Data are not stationary and indeed have some time- series effect. Had there been no time-series effect the data would have been stationary. The p- values and ADF Statistic above are obtained for 2 and 4 Lags, respectively.

Therefore, the ARIMA is constructed using 4 lags, and the results from the ARIMA are tabulated in Table 2 and Figure 2.

Based on the ARIMA results, for 4 lags we get statistically significant results and the pvalue for the coefficients is 0.005 for the AR (Auto-regressive) component and MA for the Moving Average components. With this, the forecast for GDP is constructed and shown in Figure 3 below. 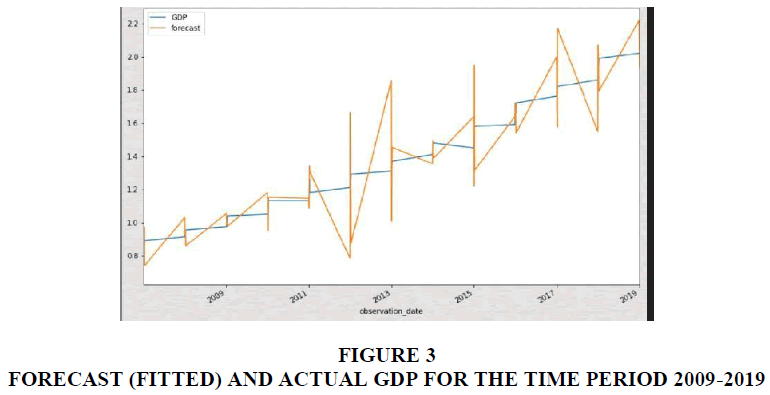