Relationship between Leadership Commitment and Performance of Public Sector Universities of Punjab, Pakistan

Current study aims to examine the relationship between leadership commitment and performance of public sector universities of the province Punjab, Pakistan. Public sector universities are referred as Higher Education Organizations (HEOs) in this study. The study is quantitative and data were collected by means of survey from the respondents. The study includes public sectors universities of the Province Punjab, Pakistan, which are located in the different areas of the province. There are twelve public sector universities in the Province among those seven were included in the study. Population comprised of department heads, teaching faculty and students. Findings of the study revealed that there is moderate positive relationship between leadership commitment and performance of HEOs. There are sub factor of leadership which included in the study to examine the leadership commitment. Findings show the continuance commitment (sub-factor of commitment) influences HEOs performance. The highest correlation of continuance commitment has practical implication for HEOs performance since the leaders who are associated with HEO’s for a longer period of time are more capable of improving the system because of their knowledge and in depth understanding of the problems encountered in their departments. On the basis of findings it can be said that merely leadership is not sufficient for performance improvement but they also need supportive and committed team too to excel.

Leadership has been incorporated with various hierarchical levels such as individuals, units as well as organizational levels therefore it is considered very important, moreover leaders are deputed many responsibilities in organizations Dansereau et al. (1984); Yammarino et al. (2005). According to Leadership behaviors, leadership is definite as an influential relationship between leaders as well as followers who are desirous of substantial changes that must reflect their common goals. With the passage of time, as the researchers continue to explore that what are the important contributions to leadership’s success and failure then various dimensions and of leadership behavior are being developed. In the past researches Yiing et al. (2008), relationship has been found on commitment in the area of leadership behavior of directive, supportive aspects. Commitment is very important since it positively influences organizational effectiveness and wellbeing of employees. There are various ways through which the concept of commitments is measured as well as defined. Despite the fact that the existence of various dimensions of commitment have been acknowledged however, a core essence of commitment must be defined that distinguishes it from other constructs and characterizes its unique form Mayer & Herscovitch (2001). The implications of different mind-sets on behavior have been developed as a mechanism through which three mind-sets such as normative, continuance, and affective commitment are involved. It has been contended that affective commitment must be linked to a wide variety of behaviors as compared to the other forms of commitment even when the focal behavior is clearly measured as well as specified. Focal behavior as well as target of interest must be specified in the objectives of research on commitment. Two important versions of a measurement of ‘organization commitment’ are considered, one of these focuses on membership and the other one focuses on the attainment of organizational goal in order to explain the variation in the focal behavior depending on the interest of the researcher (Mayer & Herscovitch, 2001). Various researches in the area of the organizational commitment literature have shown associated behavioral outcomes with commitment Meyer et al. (2001); Yiing, (2014).

In most of the studies, a relationship has been pointed out between leadership and institutional performance. Gert (1964) contends that an effective leader always focuses on that how institutions upgrade the performance and face the present and future challenges in order to achieve the organizational objective. Whitener et al. (1998) argues that leaders always play an important role in order to establish and develop a trust within institutional aspect. Dirks & Skarlicki (2004) contends that trust is a very important principle that is based on the relationships among individuals in a company and it helps to achieve institutional goal. Presently, there is a dearth of research studies that investigates the role of trust of person, group, leaders as well as institutions.

In any organization, the role of the leader depends and linked with the performance of an institute. April Chang et al. (2005) argued that leadership is a very vital factor of management as well as managing source of human reserve; furthermore it helps in gaining sustained competitive advantage in order to improve institutional performance. Kakavogianni (2009) contends that leadership can support the employees to reach to their maximum level of performance and also to get the current objectives of the institution. Leadership has great importance since it influences the condition of the organization. Any type of institute needs good leaders who can encourage their follower by improving employee engagement to boost the performance of business. There are various potential variables which are associated with leadership behavior and they play a significant role. Kiue (2010) stated that the behaviors of top-level leadership play a imperative role in the institute. Leaders are very important elements in the success of any type of organization. Highly competent leaders are an important source that contributes to the establishment of an environment that helps to achieve institutional goals. As effective leaders have been shown “to be predicative of attitudes and performance in organizations, the question was raised regarding whether other leadership behaviors would also be predictive the same way” Cascio et al. (2010), p.14). It has been suggested in the studies about management literature that “top management commitment may have a great impact on organizational practices” Babakus et al. (2003), p. 34). According to Meyer & Herscovitch (2001) “there are various forms of commitment in the workplace and they have the potential to influence organizational practices” (p. 78). Great leaders are need by all the organizations since they positively influence their co-workers and help to achieve organizational goals. Commitment of leadership is a key to the outcome of organizations Yiing et al. (2008); Kieu, (2010). Thus, those leaders who have proved to be committed play a vital role in order to develop a suitable environment that renders organizational effectiveness (Cascio et al. 2010).

Previously, numerous studies in education sector focuses on leadership commitment with reference to their employees’ commitment but this research studies the dimension of leadership in perspective of organizational performance. In this study organizational performance not merely limited to numerical quotas but also includes the perception of participants in term of their satisfaction with organizational practices. Various studies in banking, business and industrial sector are available in existing literature which provide insight regarding these sectors but very few in the field of education. Current study is an effort in the education sector to uncover the hidden realties and share the obtain results for improvement and betterment.

The study is based on quantitative approach which allows the researchers to collect data from large population and generalize the obtained results. Close ended questionnaires were used both questionnaires were adapted and used after confirming reliability and validity to ensure the usability of the tools in local context. Current study included seven public sector universities which are located in different areas of Pakistan, therefore, quantitative approach and survey design was appropriate for the conduction of study. Pakistan has five major administrative units; Punjab, Sindh, Blochistan, Khyber PakhtunKhawa and Gilgit Balistan. These units referred as province and provincial government is responsible to manage the province with the cooperation of federal government. However, Higher Education Organizations are regulated by Higher Education Commission (HEC) and this regulated authority is governed by state.

Following are the result of the study presented in the form of Tables and Figure.

Table 1 illustrates the pilot study before actually administering the questionnaire on the sample the Higher Education Organizations’ Performance (HEOs’) has the Cronbach alpha of .915 indicating high reliability. However Table 2 “indicates the reliability of sub scales applied in actual study also indicates the validity of the scales in the Pakistani context research in which some variation in the reliability can be expected due to two main reasons”: The cause of respondents’ biasness could possibly be due to the readability of the questionnaire items as well as their understanding. The reliability of sub-scales of leadership commitment also seems acceptable and ensures its usability in the local context.

Above Table 2 presents the mean value of sub-factors of leadership commitment which indicate that higher educational organizations are performing well. The mean values also shows that sub-factor, continuance commitment is more in practice as compare to two other sub-factors of commitment. The perception of participants, teaching faculty and students show their trust in the higher education performance and their leaders’ commitment towards the institution. In order to examine the strength and nature of relationship among leadership commitment and performance of higher education organizations product moment correlation co-efficient is applied which indicates that both variables have positive linear relationship. Normality of the data is determined through Kolmogove-Smirnove statistics and present in QQ plots. Kolmogove-Smirnove suggests that if the value it above .05 then data meets the normality assumption test (Pallant, 2010). The Kolmogove-Smirnove value of leadership commitment and HEOs performance is P=0.423 and 0.066 respectively the significance values is above 0.05. 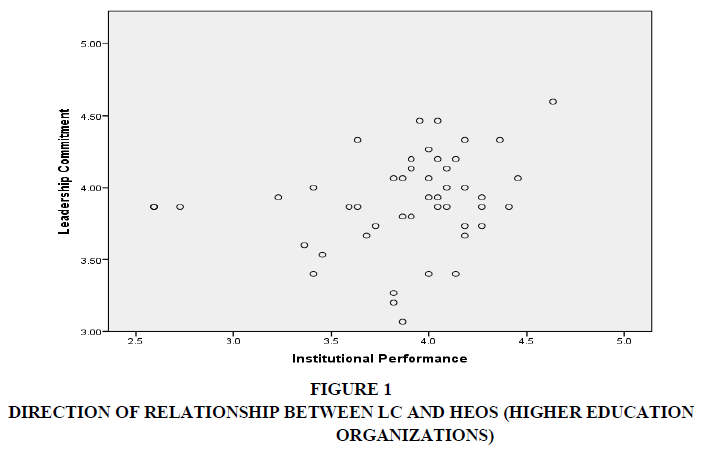 Therefore, in the current study leadership ratio is small in magnitude due which results are carefully being generalized. Overall literature is consistent with the findings that leadership’s role play significant role in organizational performance Schriesheim, et al. (2006).

On the basis of findings it is concluded there is positive relationship between leadership commitment and performance of HEOs. Organizational excellence mainly depends upon the leaders’ devotion and involvement within the organization. There are three different sub-factors of leadership commitment and the study shows all of these sub-factors have positive association with organizational performance. However, most of the respondents’ shows the level of continues commitment is higher which indicate that they are attached to the organizations for the sake of their own needs and this finding is based on practical situation. This study focuses the public sector universities however; in future inclusion of private sector universities may provide vibrant kind of perspective which provides a comparative description of both sectors. Moreover, this study concise to faculty of social sciences but further studies may be conducted in other faculties in order to obtain picture of entire organization.

Kakavogianni, D. (2009). Charismatic Leadership and its emergence under crisis conditions: A case study from the airline industry.