The Empirical Study on Seafood Export Performance in the Mekong Delta, Vietnam

Purpose: The purpose of this paper is to define some dominant factors on the performance of seafood export companies in the Mekong Delta in Southern Vietnam conducted by the empirical study. Methodology: This study has been combined qualitative and quantitative research methods. Qualitative research method has been conducted by interviewing 10 exporters and economics experts to modify observational variables that have been used to measure research concepts. Quantitative research has been conducted through direct interviews more than 305 exporters in the Mekong Delta in Southern Vietnam by convenient sampling using a detailed questionnaire to test model and research hypotheses. Collected data was evaluated by means of Cronbach's Alpha reliability analysis, EFA, CFA, and SEM to test and verify suggested models and hypotheses. Result and Conclusion: The results show that: (i) export performance is affected by export marketing strategy, characteristics and capabilities, industry characteristics, management characteristics, relational factors, domestic market characteristics, and foreign market characteristics; (ii) export marketing strategy is affected by characteristics and capabilities, management characteristics. However, the research subject has certain limitations: (i) due to limited resources in conducting research, the sample size consisted of 305 seafood firms; (ii) This study conducted the sampling technique of using direct interview methods from respondents.

It is crucial for firms in emerging markets to improve their export performance. There is a dearth of research about firms’ export performance in emerging economies (Leonidou, Katsikeas & Samiee, 2002). In recent years, Vietnam’s exports have been played important roles in economic growth along with consumption, investment and imports. Export growth is shown increasing and relatively stable over recent years (General Statistics Office of Vietnam, 2017). It has contributed to macroeconomic stability such as cutting down the trade deficit, maintaining a trade balance and other international trade agreements. Seafood products are one of the main export commodities in Vietnam. Its turnover in 2016 reached about $7.05 billion which makes up 4.0% of Vietnam’s total export turnover (General Statistics Office of Vietnam, 2017).

Currently, Vietnam ranks in the top three countries of the world (after China and India) for aquaculture production (Ministry of Commerce and Industry of Viet Nam, 2017). However, the plague of drought, salinity intrusion from Southern Central to Delta Mekong provinces and tragic marine pollution (Formosa massive issues) against fishermen in the four central provinces have been concerning to environmentalists. These issues are affecting to seafood farming directly in raw materials and indirectly in the labour sources. Most fishermen can’t easily switch to another occupation as the only skill they know is fishing. In addition, technical barriers and trading protection from importers’ countries have been built up. It seems likely there may be less suitable export marketing strategies for exporters from Vietnam. Seafood exporters may have to suffer very much due to these factors. They may have to look for a niche market for survival.

In international markets where competition is increasing, the requirements for success lie in identifying the factors affecting exports and taking corrective actions (Ayan & Percin, 2005). Therefore, the issue at hanh is to understand and quantify these factors relative to how they might be affected exporters from Viet Nam. On this basis, a number of research implications are proposed to promote fisheries.

With the rapid growth of international business, exports play a key role in many firms’ survival and growth (Chen, Sousa & He, 2016). In order to stay competitive in today’s global market place, it is crucial for firms in emerging markets to improve their export performance (Adu-Gyamfi & Korneliussen, 2013). Exporting is a fundamental strategy in ensuring a firm’s survival or growth and firms may achieve the competitive advantage in international markets with a positive influence on current and future export performance (Navarro, Losada, Ruzo & Diez, 2010).

Export performance is defined as the outcome of a firm’s activities in the export market (Shoham, 1996; Katsikeas, Leonidou & Morgan, 2000; Chen, Sousa & He, 2016), as the extent to which a firm’s objectives, both strategic and financial, with respect to exporting a product to a market, are achieved via the execution of the firm’s export marketing strategy (Cavusgil & Zou, 1994), as the degree to which the firm accomplishes its goals when selling an item to an international business sector (Navarro, Losada, Ruzo & Diez, 2010) and as the outcomes from the firm’s international activities (Jalali, 2012).

Characteristics and Capabilities of the Firms

H2: A firm’s characteristics and capabilities effects on export performance (+)

H7: Characteristics and capabilities of firms effects on export performance (+)

The Results Analysis of Scales’ Reliability

The Results of EFA

The results of EFA presented in Tables 3 and 4 show suggested scales which have satisfied the standard. EFA factors affecting the export performance are respectively extracted into 06 factors corresponding to observe variables from 06 concepts with a total obtained variance of 56.490% at the Eigenvalue of 2.382. EFA export performance results have been extracted into 1 factor with an extracted variance of 72.529% at the Eigen value of 2.901. The EFA results are analysed by Varimax rotation method.

The Results of CFA

The results of unidimensionality, convergent validity and discriminant validity presented in Figures 1 & 2 and Table 6 showing that the model has Chi2 =458.110, Df=384, Cmin/df=1.193 with p-value at 0.005 was not appropriate due to the size of the sample (only 305 seafood exporters surveyed). However, other appropriate measures such as TLI=0.980, CFI=0.983 and RMSEA=0.025 are consistent. Thus, it is still possible to conclude that this model is consistent with data collected from the market. In addition, the correlation coefficients together with the standard deviations show that they are different from one, according to the concepts of discriminative research. The error of the measurement variables is not correlated; the weights (λi) are greater than 0.5 and statistically significant. Thus, the observed variables are unidimensionality, convergent validity and discriminant validity. 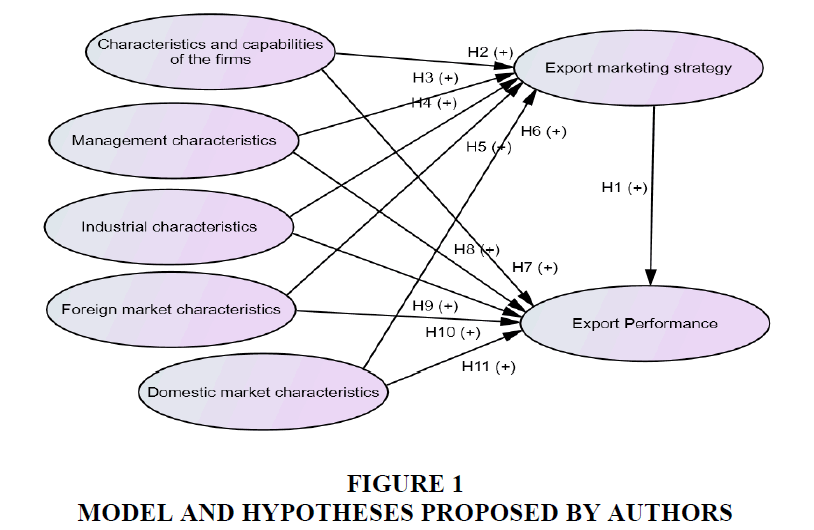 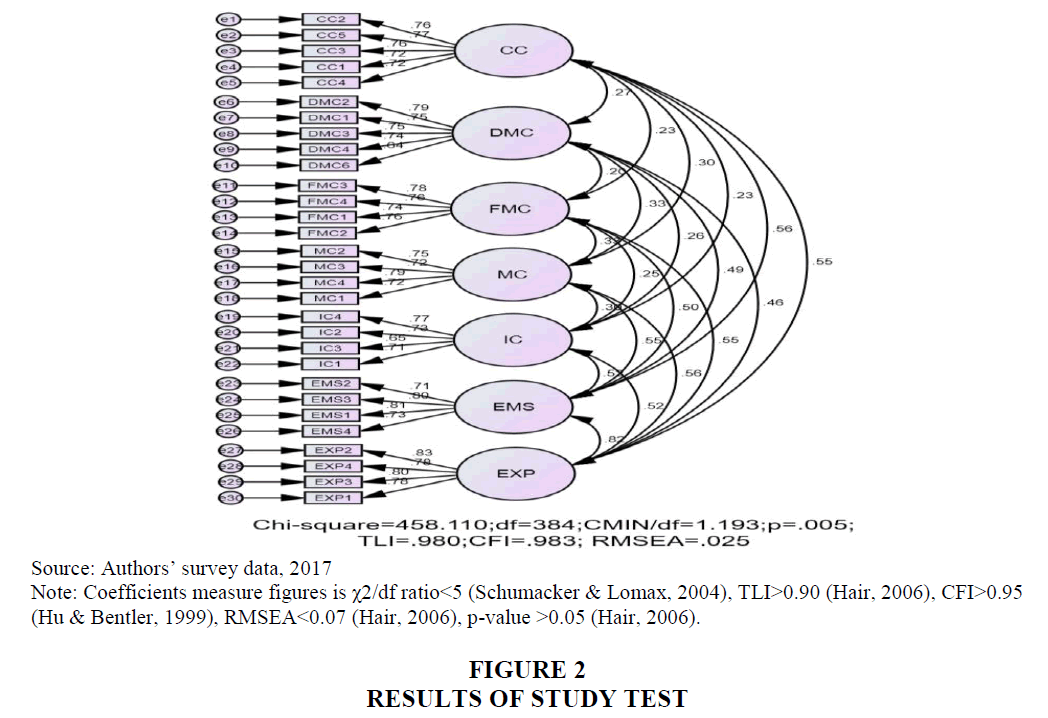 The Results of the Testing Model

The results of the testing model presented in Figure 3 showing that the model has Chi2 =579.264, Df=394 and Cmin/df=1.470 with p-value=0.000 (<0.05) was not appropriate due to the size of the sample (only 305 seafood exporters surveyed). However, other appropriate measures such as TLI=0.952, CFI=0.957 and RMSEA=0.039 are consistent. Thus, it is still possible to conclude that this model is consistent with data collected from the market. 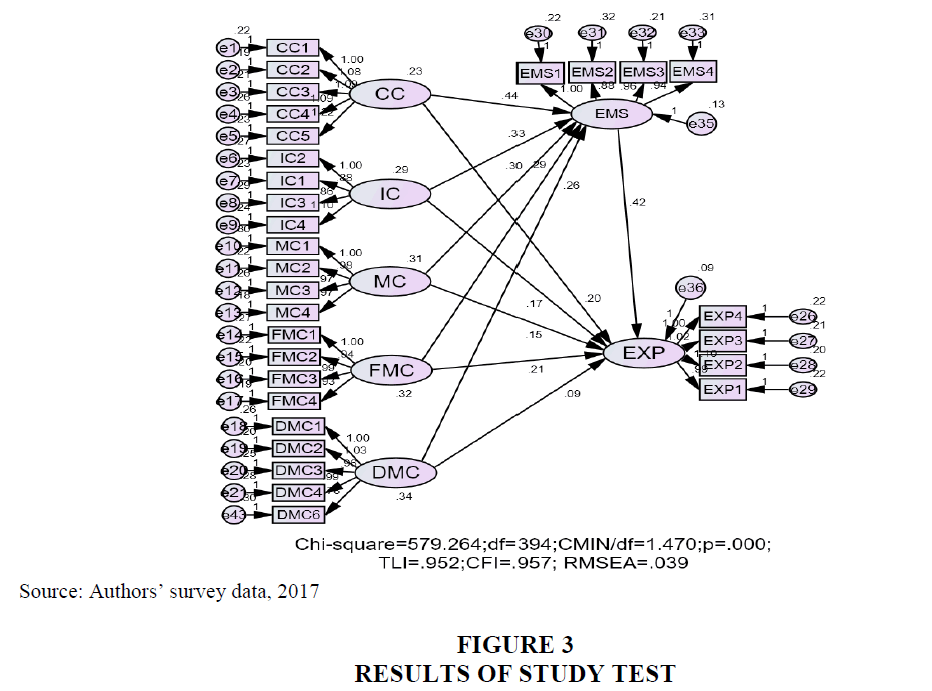 The Results of the Test Hypotheses

The results of the test hypotheses presented in Table 7 show that all hypotheses are acceptable.

? When seafood firms have reasonable export marketing strategies through having a product differentiation and quality strategy, promotion strategy, distribution channel strategy and pricing strategy, it will increase the company’s export performance. These factors have the strongest effect on export performance with an estimate of β as 0.423.

? As the attractiveness of foreign markets expands, the rate of competition of the seafood market is substandard. Export barriers for fishery products in foreign markets are going to be lifted and those having cultural similarities to the Viet Nam market will increase export performance with an estimate of β as 0.212.

? When the fishery market is growing steadily, seafood exporters may put more investment in technological development and the level of competition of low-grade enterprises and the state-oriented fishery development will obviously grow in export performance with an estimate of β as 0.171.

? When Export managers of seafood firms have a good attitude toward exporting, a quality education and experience, export performance will improve with an estimate of β as 0.153.

? Finally, when the subsidiary from the government for fisheries’ export in terms of policy, trade promotion activities for export, access to information on foreign fisheries markets and when the domestic market is less volatile, export performance will increase. This is the weakest factor affecting export performance with an estimate of β = 0.089.

The research has identified and measured factors affecting the export performance of seafood enterprises in the Mekong River Delta. The method has used quantitative research methodology through the survey of 305 seafood firms. These results show that export performance of seafood are affected by many issues such as marketing strategy, characteristics and capabilities, industry characteristics, management characteristics, domestic market characteristics and foreign market characteristics. However, the research subject has certain limitations: (i) Due to limited resources in conducting research, the sample size consisted of 305 seafood firms in Mekong Delta region (Viet Nam). Thus, the results might not be representative large scale nationwide. (ii) This study conducted the sampling technique of using direct interview methods from respondents. Therefore, the reliability of the research scale may have been higher if random sampling would have been utilized.

Ministry of Commerce and Industry of Viet Nam (2017). Report of Import and export of Viet Nam. Publishing House of Industrial and Trade.

Virvilaite, R. & Seinauskiene, B. (1998). The influence of psychic distance on export performance: The moderating effects of international experience. Procedia-Social and Behavioural Sciences, 213, 665-670.